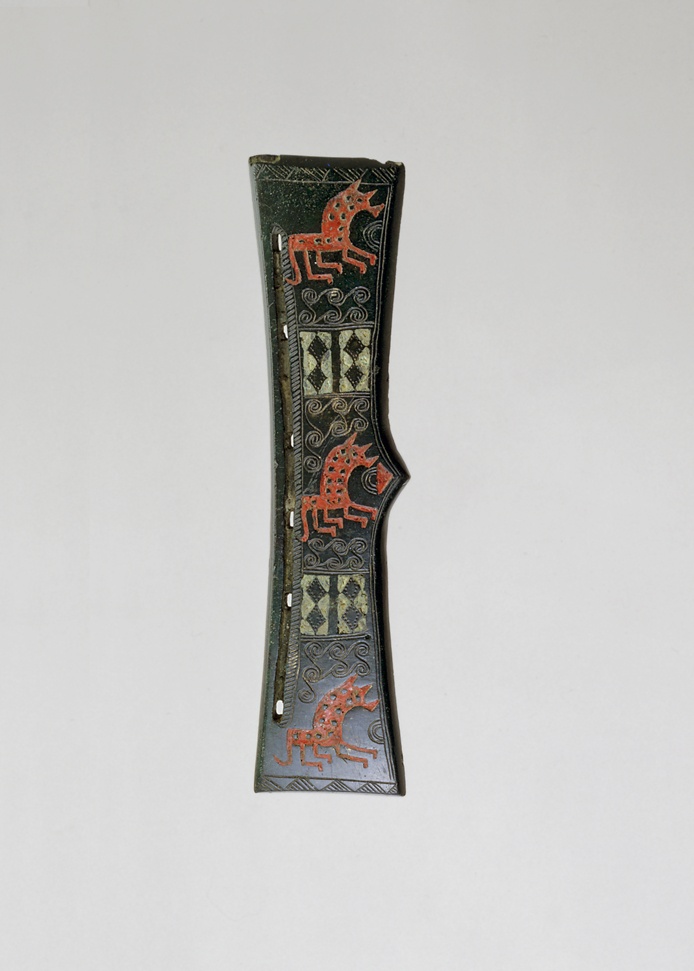 Solid-cast by the lost wax method; the parts chased out for inlaying - probably done using wooden punches [1] - and the longitudinal slit with rectangular holes prepared in the wax model. Hatchings, spirals and semi-circles as well as border lines chiselled in, in the cold; face and edges carefully burnished and polished. The inlays of powdered glass, probably following a cloisonné technique, were molten in situ; the animals in red and the two square sections (with the lozenges and central bar in bronze) in blue [2].

Condition: patina very deep dark green to greyish green with yellowish metal showing through in a few places. The red glass inlay must have oxidized and is aggressively pitted and abraded by an earlier removal of this oxidization. In the square sections the blue glass oxidized to yellow-green before turning to the present pale sand colour of a bluish-green-yellowish hue. The two top corners with casting faults. The back of the clasp scratched and in places slightly patchy or uneven.

The main representation [3] is three fierce dogs or wolves one above the other facing left in profile with the usual divisions of inlaid square sections, hatchings, spirals and semi-circles.
Such clasps fastened and adorned large protective leather belts. The representations of stags or a somewhat mythological animal, a fierce dog or wolf, attest their prestigious function.

Frequently found in the tombs of warriors of the Koban civilization, they fulfilled both a useful purpose and one of prestige.

2 A pigment derived from imported cobalt was used. Analysis by X-ray fluorescence carried out under F. Schweitzer at the laboratories of the Musée d'Art et d'Histoire in Geneva (December 1995) shows the presence of cobalt. Its production was a trade secret of the Phoenicians who exported cones of the material to different parts of the Ancient World in the late Bronze Age - early Iron Age. First suggested by L. Oppenheim in 1972 interpreting Tell el-Amarna tablets as mentioning ingots of glass from Tyre and confirmed by a 14th century B.C. shipwreck at Ulu Burun containing some discs of cobalt blue glass (The National Geographic, vol. 172 no. 6, December 1987, pp. 716-718).

3 In the Berlin example (see footnote 1, p. 19 col. ill.), there are three square sections and two animals very similar to ours which H. Born describes as horses.