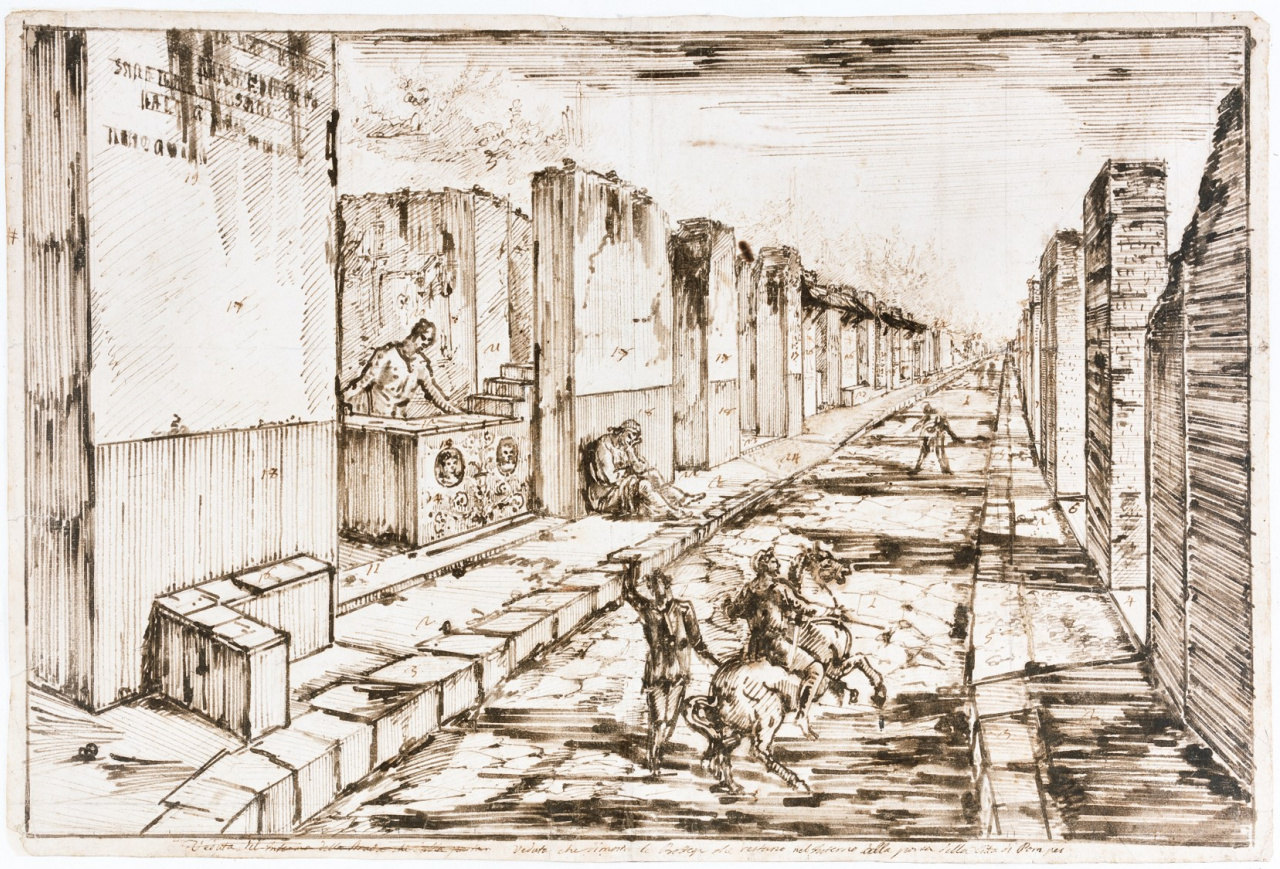 View of the Strada Consolare, Pompeii, seen from the Herculaneum Gate

“In this regard, for me the most important feature of the two Ortiz drawings is that I believe their images are entirely by the hand of Giovanni Battista Piranesi”
Andrew Robison, 2019

In terms of their subjects and artistic qualities, the best basic review of Piranesi’s Pompei drawings remains Hylton Thomas’ article “Piranesi and Pompei,” published in the periodical “Kunstmuseets Årsskrift,” Copenhagen, XXXIX-XLII, 1956. Thomas knew and reproduced eleven Piranesi drawings of Pompei. One of those, his fig. no. 7, has meanwhile passed from Col. Norman Colville through Hans Calmann (London) and Stephen Spector (NY) to Robert Lehman (NY) and then with the rest of his collection to the Metropolitan Museum.

The work of other scholars, and my own work on Piranesi drawings, has added a substantial number of Pompei drawings to Thomas' eleven. For example, Thomas did not know the two Ortiz drawings. I now know of twenty “Piranesi” views of Pompei, plus the one view of Pozzuoli in the Morgan Library (which belongs stylistically with this group), plus the three specific drawings of theatrical masks (all Morgan Library) which - judged from their style - appear to have been made by Piranesi on this same trip.

Further, in distinction from Thomas’ work, I have emphasized the issues of attribution and workshop practice. From documentary sources we know that Piranesi’s son Francesco, and his long-time assistant draftsman Benedetto Mori, went with him to the ruins south of Naples, apparently in 1777. These two helpers surely contributed to some of the drawings made on that trip. I believe we can identify Mori’s hand in seven of the known Pompeii drawings, all but one revised by Giovanni Battista Piranesi, sometimes revised only a little, sometimes a lot. We can also see Francesco’s hand in at least one of the Pompeii drawings. Thus, I strongly disagree with Thomas’ attribution of all the drawings simply to Giovanni Battista. Indeed, at least seven of the twenty views I know, including four from Thomas’ eleven, are primarily by other artists.

In this regard, for me the most important feature of the two Ortiz drawings is that I believe their images are entirely by the hand of Giovanni Battista Piranesi. Of lesser importance, the reference numbers and various titles on rectos and versos of the Ortiz drawings - like those on other Pompeii drawings - may be partially by Giovanni Battista, but many are probably by other hands, some perhaps by his two assistants, some probably added at a later time.

Further, I can offer two specific features of interest. The Ortiz drawing of “Tombs Outside the Herculaneum Gate” and the American private collection drawing of “The Strada Consulare Leading to the Herculaneum Gate” (about which I wrote you last week) show a new drawing technique in Piranesi’s work: the use of separate sheets of paper, pasted or sewn together, to expand or correct one of his own previous drawings. While common in other artists, this is a first for Piranesi. The expansions of views, to include more of the street and its structures, demonstrate Piranesi’s sense that, even though he did not want to start over again with a new drawing, he should be more and more inclusive in those views. The collaged corrections demonstrate that even though he did not want to start over, he was determined not to confuse the images with direct overdrawing (as he had done many times before), but to make them accurate while keeping them clearly legible. Both these desires, and this new working method, must have been emphasized by the distance and difficulties of travel to get to Pompeii from Rome, and probably also by Piranesi’s increasingly severe illness in his last years. This trip to Pompeii was apparently in 1777, and we know from Francesco’s account that his father was often afflicted with fever on that trip, then he died in November 1778. He needed to get the views clear and correct, but he did not expect to keep coming back, and he was now reluctant to repeat big drawings when he could just expand them or correct them with this new method.

Andrew Robison studied at Princeton University, Oxford University, and as a Fulbright Research Scholar in India. From 1970 through 1973, he taught philosophy at the University of Illinois. He joined the curatorial staff of the National Gallery of Art in 1974, becoming Senior Curator in 1983 and Andrew W. Mellon Senior Curator in 1991.
Over four decades Robison has curated dozens of exhibitions on art from the fifteenth through the twentieth centuries, especially on drawings and prints by early German artists, Rembrandt, eighteenth-century Venetian artists, German expressionists and Pablo Picasso, as well as the multi-media exhibitions, Art for the Nation: Gifts in Honor of the 50th Anniversary of the National Gallery of Art, (1991), The Glory of Venice: Art in the Eighteenth Century (1994–1995), and Ernst Ludwig Kirchner: 1880–1938 (2003).
Robison is widely published in professional journals such as Master Drawings and Apollo. He has contributed to and edited numerous exhibition catalogues including Etchings by Giovanni Battista Piranesi: the Early Architectural Fantasies (1978), German Expressionist Prints From the Collection of Ruth and Jacob Kainen (1985), Master Drawings from the Armand Hammer Collection (1987 and 1989), Dürer to Diebenkorn: Recent Acquisitions of Art on Paper (1992) etc., Robison is the author of the book, Piranesi: Early Architectural Fantasies: A Catalogue Raisonné of the Etchings (1986), he is currently doing the Catalogue Raisonné of the Drawings of Giovanni Battista Piranesi.