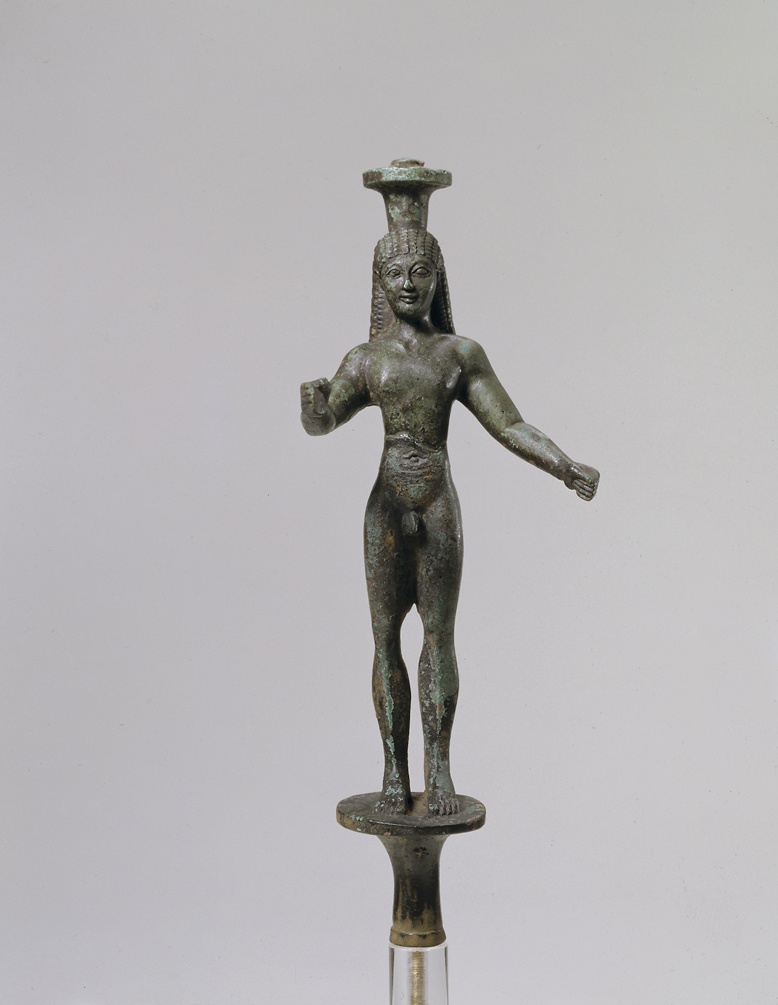 Solid-cast by the lost wax process, carefully worked in the cold.

Condition: broken in two in antiquity [1] and recently glued together. Missing are the tips of the fingers of the right hand, the bowl, shaft and stand.

The blackish bronze skin [2] abraded to a greyish green with traces of earth deposits.

This statuette was the main element of a candelabrum or thymiaterion.

The bowl would have been affixed on the head and below the statuette a length of shaft would have joined it to a foot.

Such lamp-stands originated in the East and the predilection in Ionia for this form spread throughout the ancient world.

For an example with a female statuette, see cat. no. 101; one from Cyprus, in the British Museum [3]; from Lindos, the type of bowl that would have surmounted our statue [4] and a bust, now in Copenhagen [5] with a similar but square attachment, resting directly on the hair - iconographically comparable though differing from our figure. The type spread to South Italy, see cat. no. 124, and Etruria.

This is definitely the product of a mainland East Greek workshop. It is rare testimony to the importance of artistic creativity in South Ionia in the Archaic period and is to be dated before the middle of the 6th century.

It seems not to belong to the complex of artistic centres that Langlotz calls North-East Greek [6] and that spread from Smyrna northwards, but rather to the South Ionian part of the Asia Minor coastline and its hinterland.

There are similarities with Samian figures; but the rounded compact forms, the pectorals, the particular development of the collarbones, the lower abdominal muscles and his fleshy thighs ending in voluminous buttocks are un-Samian, as is also the detail of facial features.

The single flowing curvaceous line from the top of the head running down the hair into the small of the back and flaring out at the buttocks, both very distinctive and aesthetically appealing, does also characterize certain bronzes found on Samos. Our statuette, earlier in date than most of the archaic bronzes found on Samos, is surely a work from the centre that initiated this characteristic.

A close parallel is the masterpiece from Samos in Berlin [7] which is possibly a product imported from one of the other great artistic centres of South Ionia. Though very similar to Samian bronzes, he is different and the difference is not just due to his outstanding quality.

Also to be noted on the Berlin statuette is the distinctive front part of the hair which seems independent of the rest and appears almost added as part of a wig; the same feature appears on our Kouros, though the hair is rendered differently.

1 As evidenced by incrustation in the breaks before cleaning.

2 In the present example the surface was originally highly burnished to a great smoothness and subsequently possibly suffered a fire.