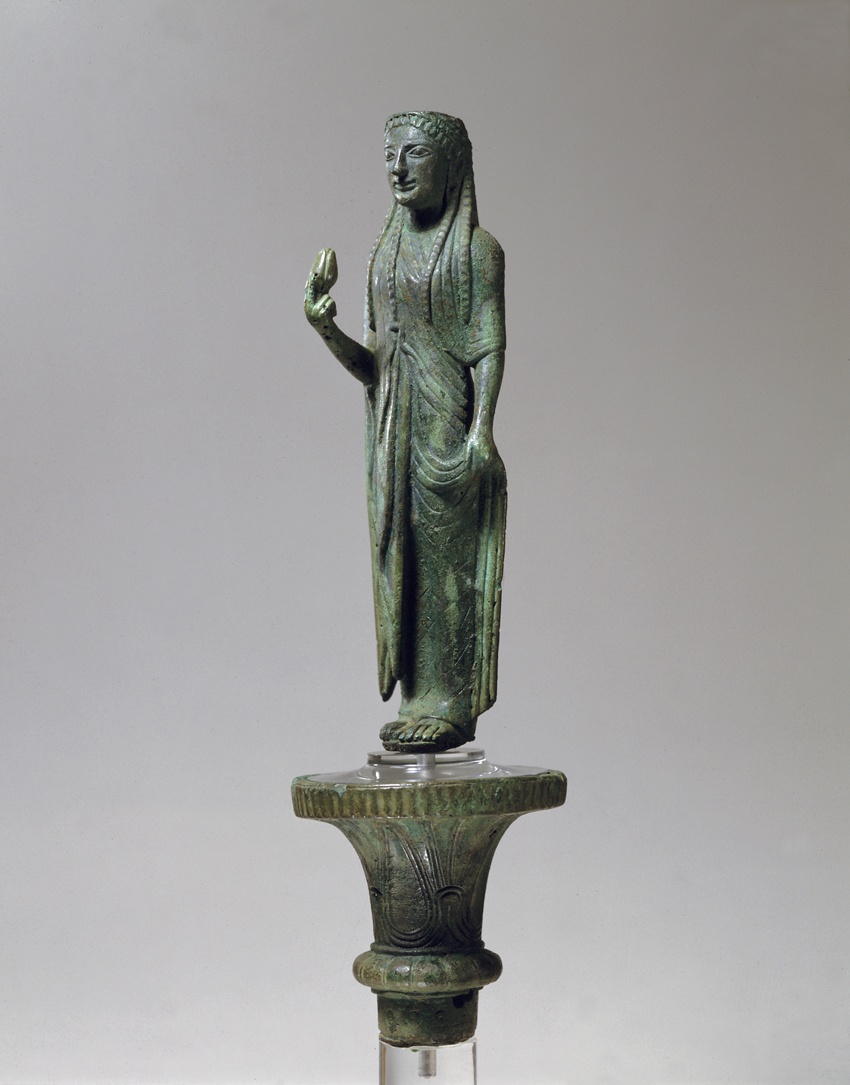 Solid-cast by the lost wax process, carefully worked in the cold.

Condition: missing are the bowl, the intermediate element on top of the head, the plate under the feet connecting the figure to the flaring element as well as the shaft and stand.

Remains of an iron plug on top of the head and traces of iron on the lower edge of the flaring element.

Patina: varying shades of green, the metal showing through in places, with some earth and malachite green deposits.

The Kore was the main element of a candelabrum or thymiaterion - the bowl would have been affixed to the flat top of her head.

There are two comparisons: a statuette in Berlin [1], clothed like our figure in a chiton and himation.

Her general stance and attitude are the same, in her upraised right hand she holds an open lotus flower, whereas it is closed on our example. Other features, in spite of differences, evoke a similar feeling, in part because they fulfil a similar function.
For instance, the cylindrical cushion elements above her head and below her feet; on the Berlin piece the moulding on the elements is divided by three vertical incisions and on ours by
a raised ridge.

The Berlin statuette is acknowledged as a typical Laconian bronze, but here the face and short thorax are very different as to the volume which is both rounded and compact.

Furthermore, the Berlin figure is sober in comparison to our more voluptuous eastern Kore with the flaring element under its feet carrying a stylized lotus and palmette pattern, and other details such as the more complicated folds of her clothing and the rich engraving on her sleeves.

The other comparison, somewhat later in date, is the Boston Artemis from Mazi [2] which has one strikingly similar feature, the hair fillet and the treatment of the hair above the headband. Remarkably coincidental is the following small detail: the herring-bone pattern on the fillet goes counter-clockwise on the Boston bronze and is marked by a central incision whereas on our bronze, it goes clockwise and is marked by a ridge. A slight differentiation in rendering certain decorative features already observed on the previous comparison.

In conclusion, these differences lead us to believe that the Kore is one of what must have been numerous East Greek prototypes responsible for so many features of Laconian artistic production of the period and responsible for influencing other areas as well [3].

She probably comes from an artistic centre in the
Miletus-Didyma region.

A possible comparison, though it is only a fragment, in marble, different in many details and later in date, is the Kore from Didyma [4].