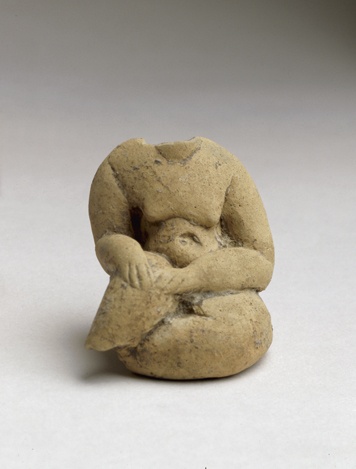 Modelled with the help of a spatula-type instrument.

Condition: head and both feet missing. There are possibly traces of slip.

A parallel of comparable size and with her legs in the same position, from the region of Pharsala [1], is ascribed to the Middle Neolithic period.

Nevertheless, our figure's less pronounced general steatopygia and the position of both her hands on one knee may suggest the Middle towards the Late Neolithic period.

Another comparison [2] from Soufli Magoula appears to be more in keeping with the sensitivity expressed by our piece.

May we perceive a degree of tenderness and humanity in her whole attitude and in the delicate manner in which her hands rest on her knee. In no other expressions of the Neolithic, in Europe or Anatolia, do we apprehend such feelings.

Does this attest an artistic sensitivity beyond the context of its time, a fortuitous accident, or is this a premonition of Greek humanism that was to develop three and a half millennia later?

2 Brought to our attention by Miss Amy Raymond of the Museum of Fine Arts, Boston, in a letter dated 29 April 1993, where she suggests that "the modeling of the breasts, shoulders and thighs compare well with your fine Sesklo figurine, and I find both are softer in line than the idol from Pharsala."