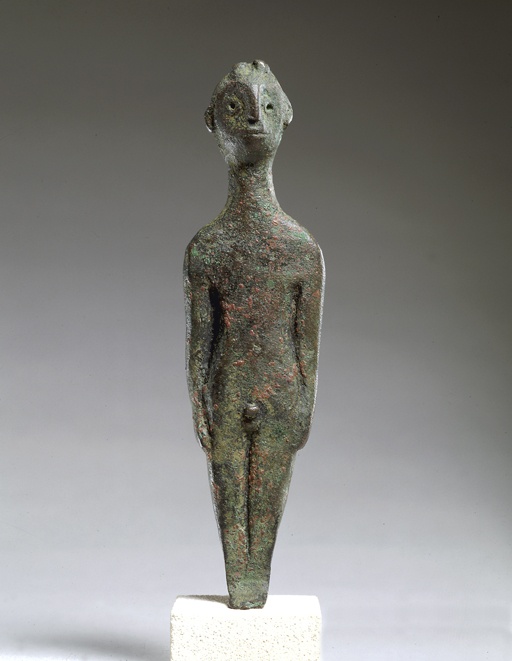 Solid-cast by the lost wax process, hammered and cold-worked.

Condition: patina brownish metal with traces of green and spotted throughout with red cuprite deposits; traces of brown earth and in the crevices of the arms and legs slight remains of the mould. Toes on left foot missing.

This unique bronze, a votive statuette, stands like a child in front of a severe parent.

The figure is fairly flat, salient features are: the two knobs above the forehead, like incipient horns, reminding us of the famous "horned Apollo" from Enkomi [1] of later date and of Oriental influence, though our figurine is indigenous; what appears to be a flattened bun of hair on the back of the head; the eyes, circled holes in a face of triangular section; the nipples and the navel expressed as slightly marked uneven depressions; the genitals rudimentarily shaped; the hands with three grooves each, indicating four fingers; the feet, a prolongation of the legs, hammered to thin, flat toes which are indicated by engraved lines.

Some features are to be found in Cypriot terracottas - though these almost all represent female idols - and certain of them hark back to the first half of the 2nd millennium, which prompts attribution to a local tradition.

For a closer parallel, though of a female (hollow and in the round), there is the figure[4] of Late Bronze Age II featuring the same arch of the eyebrows, mouth slit, long neck (all the earlier examples also have long necks) and, most importantly, the tapering legs, somewhat faceted, pressed together, with grooved toes, as are the fingers of the hands. The same features are to be found on other examples [5].

Comparable also for certain traits and spirit are two Kourotrophoi [6] of Late Bronze Age II. And there is another parallel, especially for arms and hands in the same position as our statuette [7].

The particular manner in which the line separating the legs is grooved, as well as those between the arms and body, finds its parallel on the groove between the legs of many of the terracotta comparisons; it is obvious that our bronze sculptor was highly influenced by, if not directly working in a terracotta tradition.

A terracotta group of a bull and man from a tomb at Kazaphani [8] of Late Bronze Age II, is comparable mainly for the shape and feel of the plank-like body.

The figure should be a votary, which means that the two knobs above the forehead are stylized tufts of hair; for if these were incipient horns, our figure would represent a god, and in view of his small size, probably from a household shrine.