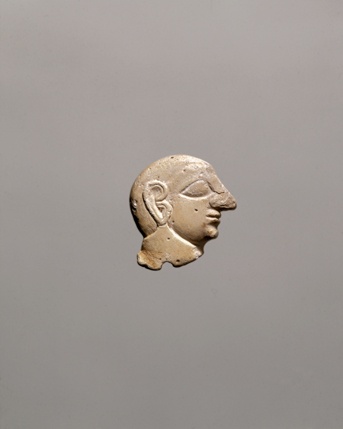 Condition: broken on a slant through the lower neck and the middle of a round drilled hole which probably held a peg that helped fix the figure to its background. The lower right side of nose abraded, eyebrow, eye and upper part of nose slightly flaked. The odd little nick and a few small pits on the surface.

The present head fits the "smiling style", the softening of forms and most especially the shaved head and sculpted eyes, characteristics ascribed to the Early Dynastic III period by A. Spycket [1]. It comes from a narrative composition of the type illustrated on the Standard of Ur inlaid in shell [2] with multiple small representations; but in keeping with its material and thickness, it must have decorated a relief such as the "dairy scene" [3] composed of limestone figures fixed on a bituminous stone background, whether partially inlaid or not is uncertain [4] .

4 If there were any traces of this, the slight wear of time has erased them, as probably broken off in antiquity.