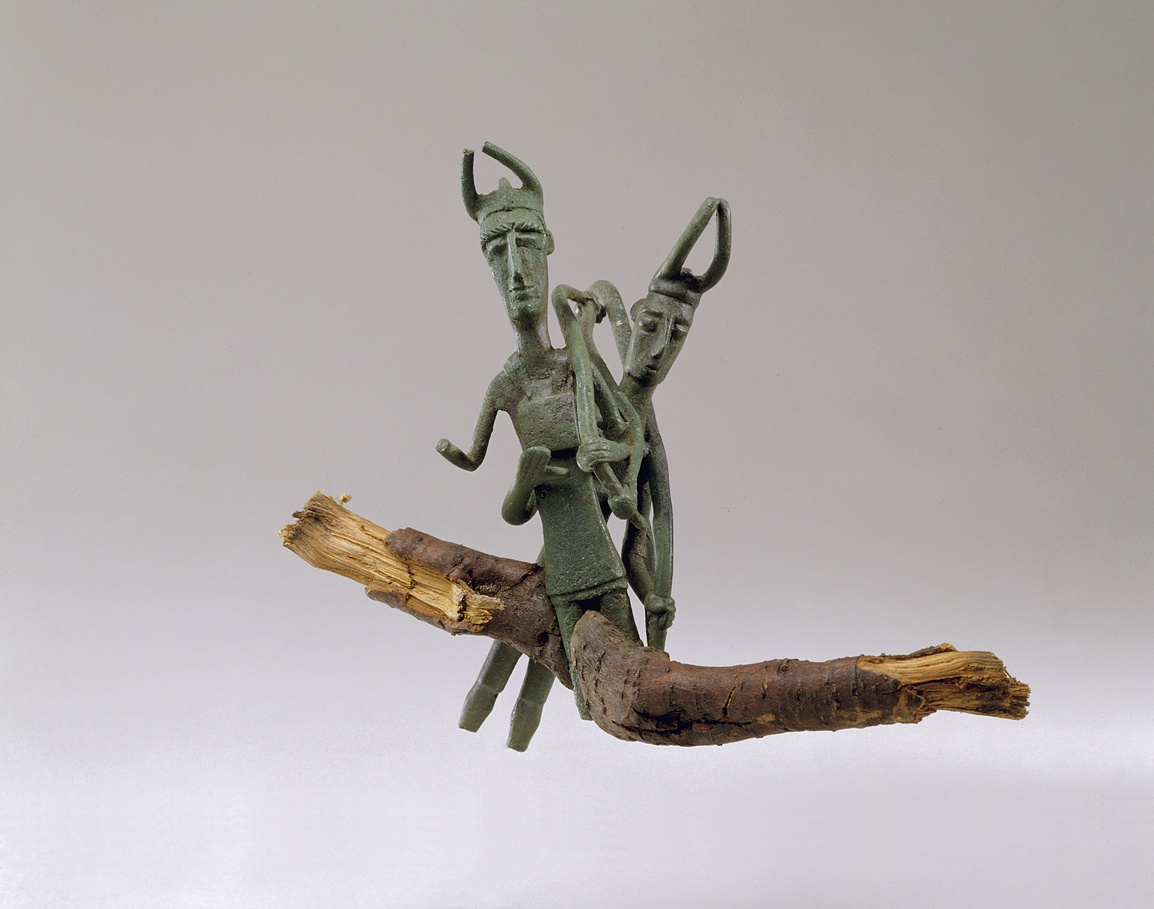 Solid-cast by the lost wax process, worked in the cold
and burnished.

Condition: a: dull green on fairly smooth surface with traces of dark brown earth. Points of horns on headdress broken, right hand, both ankles and feet missing. b: same as a. but patina with black speckles in places. Points of horns abraded, bowstring broken where already repaired in antiquity, end of lower legs and feet missing. The root an accident of nature which joins the bronzes together, presently drying out.

The root is that of a particularly sturdy species [1] that is wont to grow over certain inland regions of Sardinia. Amazingly, though unfortunately now drying out and possibly over a millennium in age, it has grown through the two statuettes breaking them off the limestone block on which they would have been fixed with lead by the tangs under their feet.

The "ambiente" that produced them has tried to claim them back, but hopefully the product of this movingly poetical accident will survive for many years to come.

Such archers are votive dedications representing aristocratic warriors or hunters in attitudes of devotion. We observe that
they are divided in two categories, warriors as fighting archers, and hunters.

Their shared characteristic is a particular headdress, a sort of ridged helmet with a crest at either end and horns jutting forward, but they are differentiated by various details of their attire.

The present examples show two such figures, hunters, wearing their horned headdress, a squarish pouch over their chests, dressed in a long shirt over shorts, their right hand extended forward in a gesture of offering. On the back of the front figure are the three usual items: a quiver with a small case attached to it on one side - which Lilliu thinks was either for holding arrow points or a product to grease the cord of the bow - and on the other a long sword with haft. On the back of the rear figure there is also a small case and a quiver, and though a sword seems to be hidden behind it, it may simply have been omitted by the artist.

The face of the figure in front is artistically more sophisticated and better sculpted with his chevron eyebrows and well-formed features. The other figure's face shows less strength and character. For the type of representation we may compare Lilliu nos. 26-282 [2].

1 Probably either the root of the Erica arborea L. from which the Sardinians make pipes or that of the Juniperus oxycedrus L., a sturdy wood for making doors, frames, etc. An analysis could be decisive but would cause damage.