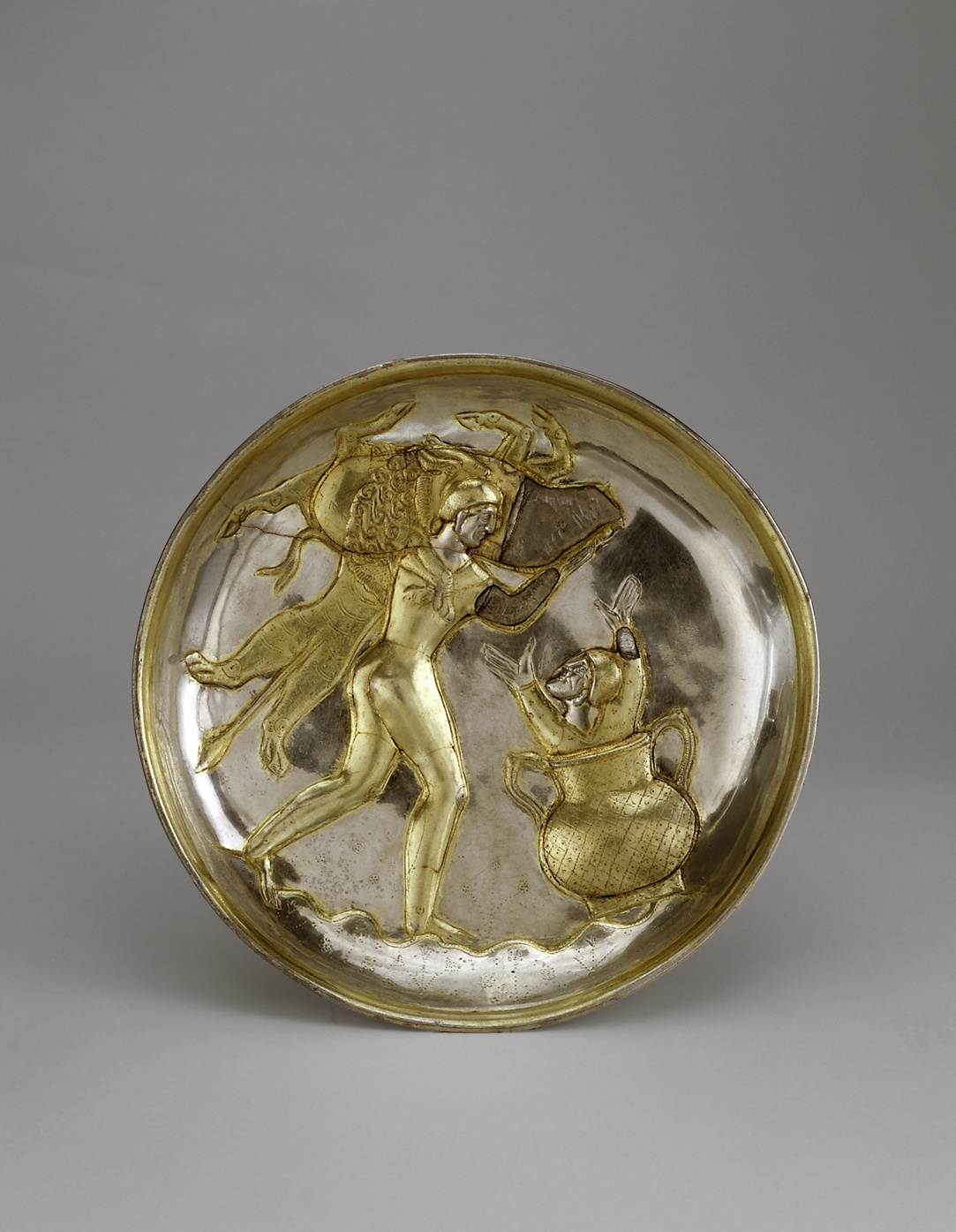 Made from a disc of silver sheet hammered [1] into shape, leaving a thickened rim. The emplacement for the relief parts are outlined, grooved out, the background roughened. The relief elements are solid and prepared by hammering; once inserted the joins are annealed. The whole is touched up in the cold; the flowers punched in, the details of the feline's skin and the decoration of the pot done with tracer and punch. Different parts are mercury-gilt: the edge of the dish, the wavy line for the ground and all the inlays save for the faces and necks of Herakles, Eurystheus and the latter's hands. The plate was then burnished and polished; its foot, a hammered ring of silver made from a strip, soldered on.

Condition: the gilding worn in places. On the underside two long cracks, parts of which appear on the inside; also smaller cracks on the underside, one of which comes through on the feline's upper hind paw. Missing are the inlays of the boar's head, of most of Herakles' left arm and of a section of Eurystheus' left forearm. The plate slightly warped.


This dish poses problems, for among the many known Sassanian silver plates it is unique for its iconography and style. It has been variously described and dated anywhere between Parthian, c. 200 A.D. [2], to possibly the region of Tabaristan (south of the Caspian Sea), 7th-8th century A.D. [3].

B. Marschak on a visit in June 1989 called the dish Sassanian to be placed in the 5th century A.D., during the last wave of classical influence from the west.

The illustration depicts one of Herakles' labours, where the hero carries on his shoulders the Erymanthian boar he has captured, to the courtyard of the palace of King Eurystheus. The king emerges from the pithos (grain-jar) where he has taken refuge, raising his arms, throwing his head back as he looks fearfully up at Herakles who intends to drop the boar onto him. On late Archaic Greek vases [4] we see the spirited expressions of Herakles and the king in conjunction with action, as the hero already has his left foot resting [5] on the edge of the jar ready to hurl the boar into it. On our dish, the scene has lost the vitality of action, it is decoration, it narrates an event devoid of emotional content almost as though a distant echo of a story whose real meaning has somewhat faded from memory. There are slight differences in detail from the Greek scenes. The jar, with its decoration [6] of cross-hatching with dots, rests on the ground, not buried with only its mouth visible. The wavy line for the ground, under Herakles' feet and the pot, sometimes finds its equivalent on Sassanian dishes in the form of rocks or a stylization such as the leaves at the bottom of a dish in New York [7] and the wavy decoration at the bottom of a late Sassanian plate also in New York [8]. Noteworthy are the features of Herakles and the king. Their noses differ, possibly representing racial differences [9]. Their faces show unquestioned quality of execution, whereas the feet and what is left of the hands a simple schematization. For an earlier dish, but somewhat akin in feeling, is a silver plate in Cleveland [10] of Anahita stepping similarly over the ground.

In conclusion, may we remark that loot from Antioch at the time of Khusro I (A.D. 531-579) might have been the inspiration for a dish such as ours.

1 Though possibly partially cast for the basic form and then turned by hand into shape for which a point on the centre of the underside would be an indication. W. Haberkorn, who sometimes restores for us, suggested this and observed what he thinks are traces of fingerprints on the gilding above the right leg/knee and on the pot. If these prints are on the silver and visible through the gilding, it would prove that these parts were cast by the lost wax method.

3 A.S. Melikian-Chirvani, for possibly Tabaristan and the date (verbal communication).

6 A motif characteristic of terracotta pots without handles of
the 8th-9th century onward over regions that were the former Persian Empire.

9 In a verbal communication A. Leskov on a visit on 12
January 1990 remarked the difference and suggested that the anthropological types and dress of Eurystheus may be that of Sogdians or Sakas. This would be possible but could only be explained if a Sassanian craftsman had made it for a non-Persian client.