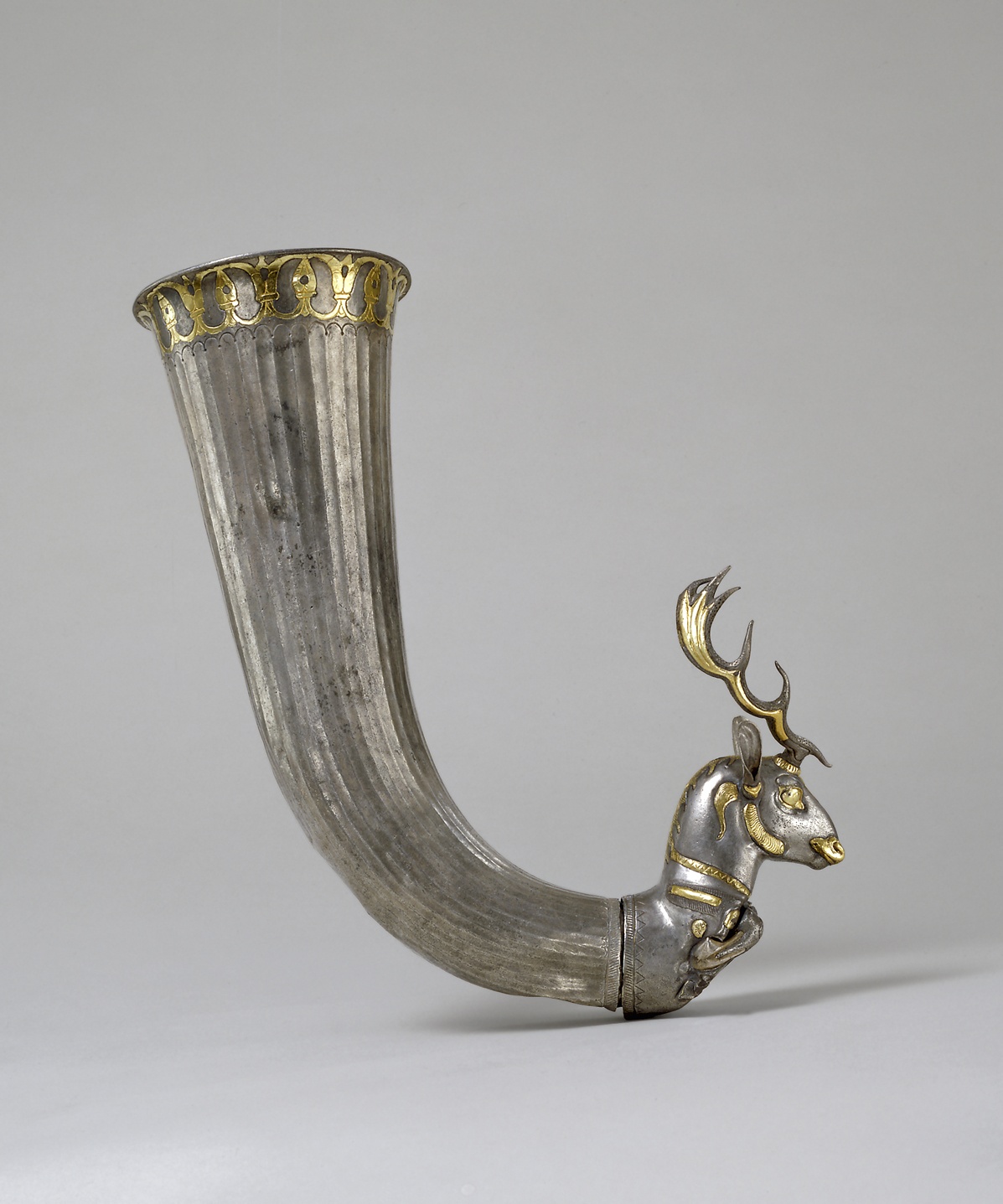 For the technique employed refer to the amphora with ibex handles, cat. no. 205 and footnotes 2 and 3.

In view of the vessel's length, it was back raised from about the middle. The vessel was then filled with either bitumen/pitch or with a mixture of powdered sulphur rock and fine sand, heated to render fluid. Once hardened the fluting was then hammered in or impressed from the outside [1] The decorative details are also chased.

The lower end is then trimmed and the inset bezel for the protome finished.

The mouth of the vessel is then hammered and annealed to shape and the lotus frieze is outlined by "tracing", the surface within the contours lightly grooved and thin gold sheet applied and burnished into place.

The protome formed as the vessel and in keeping with its sophistication worked extensively and elaborately by the repoussé method from both sides.

The ears and antlers shaped separately by cutting and hammering, the former inserted by means of a dowel, the latter, it would appear, by a sort of plate held in place by three dowels. The various thin gold sheet elements executed as the lotus frieze. The inlays for the rosettes [2], the legs and hooves would appear to be of electrum. A round hole in the centre of the muzzle to enable passage of the liquid through a spout.

Condition: the body of the vessel with a few indents here and there, a large one on the underside at its lower end. The whole forepart of the protome crushed in and torn, the left cheek and jaw with part of the neck crushed, the left antler and spout from centre of muzzle missing, the left ear pushed up in restoration.

The horn conforms to type both for the vertical fluting and the decoration around the outer lip. The buck protome is of such extreme sensitivity, the author would like to say humanism, that it is probably the work of an Ionian Greek producing for a Persian satrap. The art is Achaemenid though it does not partake of its cold formalism.

A close parallel is a bull-headed partially gilt silver protome in the National Museum in Copenhagen [3] that must have belonged to a comparable rhyton. It was acquired in 1955 and said to have come from Sinope. This is all the more interesting since the Achaemenid handles on an amphora in Paris [4] in the shape of ibexes ascribed to the region between Sinope and Trabzon [5] bear a strong similarity with ours for the style and gilding of the mane, and the amphora's fluting is similar with its rounded chased tops. There is also a rapport for the mane with the handles divided between Paris and Berlin [6] surely from the same vessel said to be from Amisos to the east of Sinope and according to other sources from Armenia [7]. It is interesting to note, says P. Amandry, that an amphora with griffins on the Persepolis reliefs is held by an Armenian.

In conclusion, it is obvious that precious metal vessels were produced in different centres throughout the empire. The present example is exceptional but bears comparison for several details with the above. Whether the workshop and the artist who produced it was an Ionian Greek working in Caria, in the region of Kyzikos, in a centre around Sinope or located in Armenia is impossible to determine and must await lengthy study or further discoveries to enable a better attribution.

1 After having fulfilled its purpose the core can be made fluid again by heating, and removed.