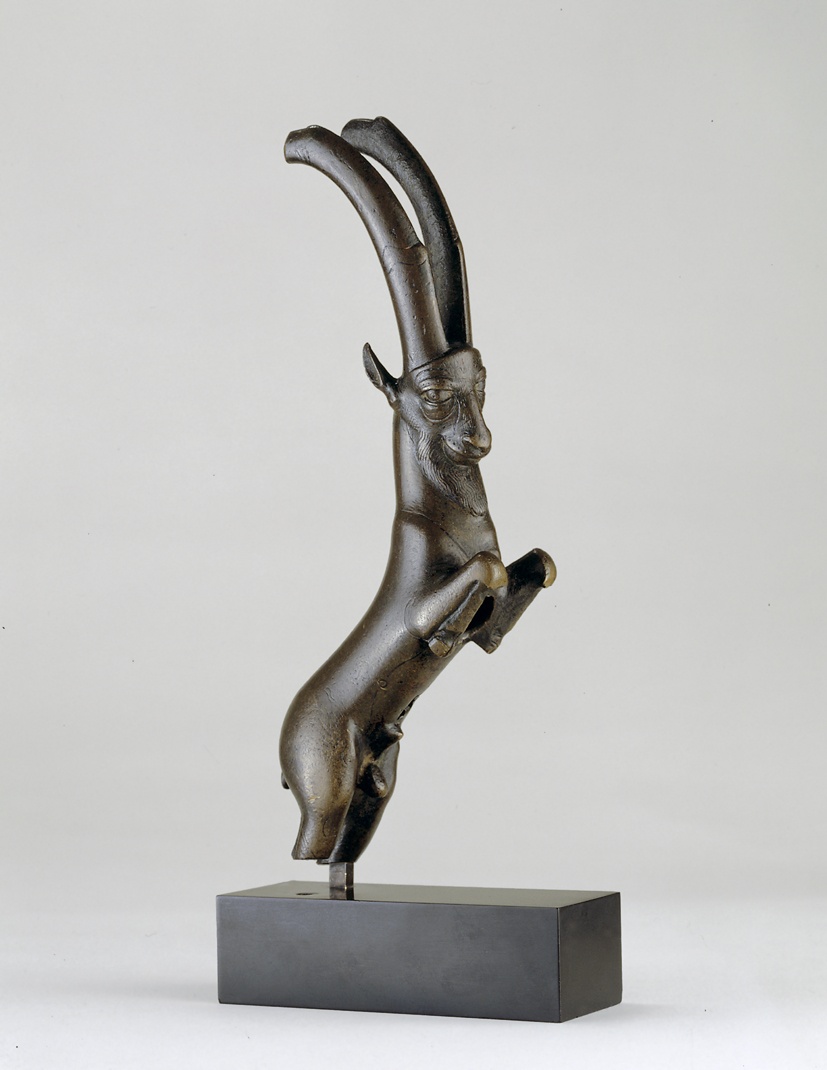 The body hollow-cast by the lost wax process, the legs and horns solid-cast. Elaborately cold-worked with very fine engraving and chasing.

Condition: unfortunately tampered with in the 16th century to conform to the taste of the day. The whole surface was stripped down to the metal and then covered with blackish lacquer, presently almost all worn off.

The ends of the broken horns filed down to the same length; the hind legs missing and the breaks also filed down. A hole behind the testicles and a jagged gash in the lower stomach; a large round hole between the front paws, possibly made in the 16th century.

The surface a smooth metal, a light medal colour at the much-rubbed knees, with traces of blackish lacquer and a few minute specks of green patina and reddish cuprite.

The engraving worn but visible on most parts.

Characteristic of Achaemenid art is the animal's somewhat "human" upper face with its brow almost like a diadem, in addition to which it bears some resemblance for the plasticity of its body and neck to the silver gilt handles in Berlin[3] and the Louvre[4]. The slight twist of the head relates it to the handles of the amphora in Paris[5]. and there is also a rapport for the ears. The incised undulating lines around the thickening of the horns are a schematic way of showing what are usually portrayed with gilded ripples in low relief on the silver gilt handles of amphorae, and which are represented in a similar way but without gilding on the silver ibex handles of the amphora, cat. no. 205.

This rearing ibex was surely the handle of a bronze ensemble - but whether of an amphora, some other vessel or possibly even a piece of furniture, is uncertain - for we have the remains of a groove just under the knees of the forepaws, but the hind
paws are broken too high to give a more precise indication. However, the stance would indeed be appropriate for an amphora-type vessel.

Notwithstanding the wear by depatination and repeated handling for over four hundred years, the remains of the elaborate chasing over different parts of the head and body and the punched dots on the muzzle point to the first half of the 4th century and to an artistic centre somewhere in the Achaemenid Empire.

Dr. Alfred Bernhard-Walcher of the Antikensammlung, Kunsthistorisches Museum, Vienna, at our request, has researched the history of the ibex. We would like to express here our deepest gratitude.

1 Imperial Vicar in the Tyrol and younger brother of the Emperor Maximilian II.

2 P. Amandry says of the ibex: "private collection, provenance unknown", and E. Porada mentions "private collection, Paris" and adds: "Possibly, this piece belonged formerly to the Ambras collection and perhaps this ibex has passed on from hand to hand since the time of its production". The "hand to hand" is a very nice idea but highly improbable, for the piece was surely buried and what the bronze's surface underwent is explained above.

It belonged to Archduke Ferdinand II, one of the great collectors of the 16th century, its provenance unrecorded, was part of the Ambras collection and remained in the Habsburg collections until the early 20th century. Our first record of it is in an inventory made in 1596 "also a long animal of metal, three feet and both horns broken"; again in the inventory of 1788 as still in Innsbruck: "No. 174. An animal with very long body, short tail, two horns and a beard. Is in my opinion a sort of Egyptian goat. The entire body is covered with long hairs. Made of bronze, 7 1/2 inches in length (= c. 19.5 cm)". Between 1806 and 1808, documentation in the archives shows that the ibex was for a very short time in the KuK Münz- und Antikenkabinett in Vienna: "a large ibex, his body stretched powerfully, about to make a great leap". The inventory of 1821 (collection in Vienna) reads: "No. 233. A long animal seated on its hind legs, like an Egyptian goat. The forepaws are broken, the horns slightly damaged. Bronze. 7 1/2 inches long". Still in Vienna in 1877: "Inv. no. 233, elongated jumping goat, defective". (Excerpts from the inventories appear here translated from the German texts relayed to us by Dr. Bernhard-Walcher in a letter of 28 November and a card of 14 December 1990.)

It is last mentioned in the imperial collections in a revised inventory of 1884, for in a newly-established Kunstkammer inventory of 1896 which included the objects of the Ambras collection, it is no longer listed. It possibly went to a small castle in Merano, Schloss Rottenstein, which was furnished with lots of apparently minor objects which came from the Emperor's castle at Ambras. Archduke Ferdinand Karl (1868-1915), lost his imperial family rights when stripped of his title by Emperor Franz Joseph in 1911 when the latter learnt that his nephew had secretly married a commoner in 1909, Bertha Czuber; he was from then on known as Mr. Burg. However the emperor magnanimously allowed him to keep his financial prerogatives and gave him Schloss Rottenstein fully furnished.