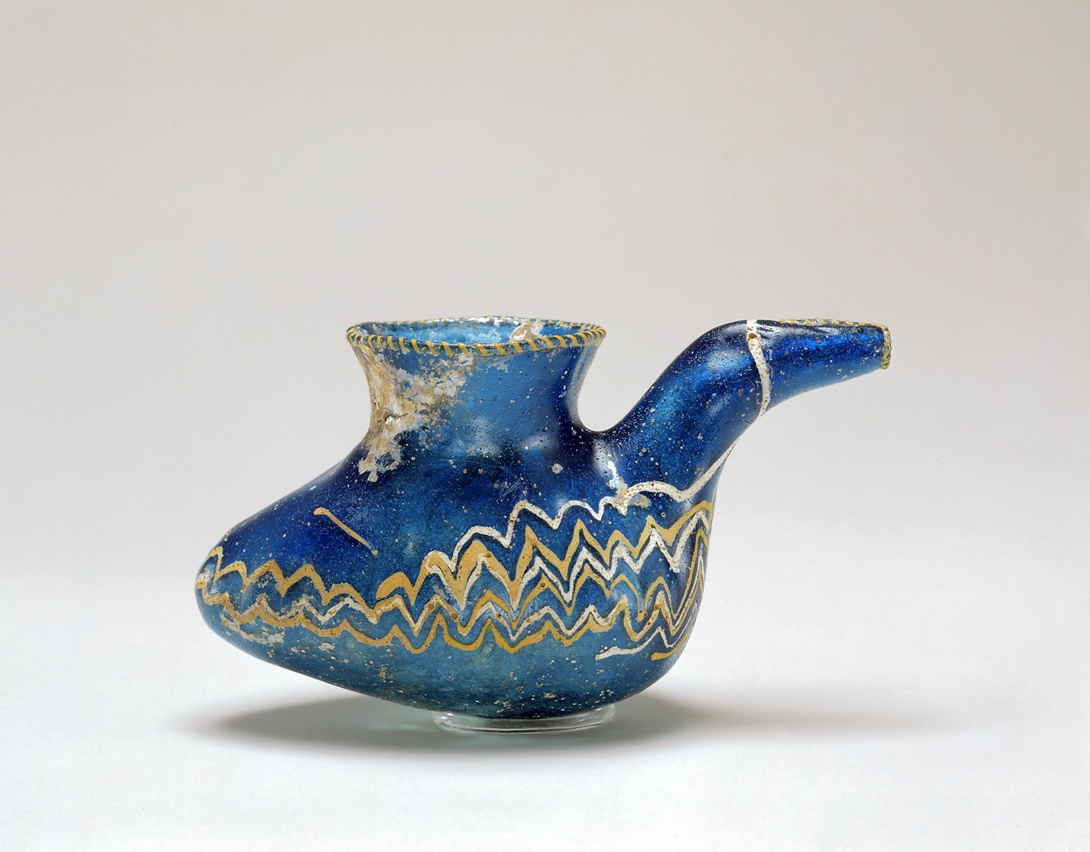 The rhyton fashioned of hot fused glass to an ovoid shape over a friable core supported by a metal rod through the mouth. An internal metal armature must have supported the spout, possibly extending beyond the opening to facilitate the complex manipulations required in applying and smoothing the molten glass. The vessel, a bubbly dark turquoise blue, fairly even in thickness, was decorated with applied twisted glass threads of various colours. These were tooled free-hand into a zigzag pattern and marvered into the surface of the vessel.

There are slight depressions and indents, pinchings or tool marks made when shaping: on the body, at the base of its mouth, at the inception of the bird's neck, and longitudinal depressions on either side of the breast.

The vessel was finely polished.

Condition: parts of the body iridescent and pitted. Two pieces at the back right side of the neck and mouth of the rhyton broken and glued back, a chip missing.

There is no exact parallel for this unique duck. There is however an ovoid-bodied beaker with a wide flaring lip, comparable to the early glazed composition vessels from Assur and Ziwiye, of identical colour, similar decorative pattern and possibly from the same workshop. Its matrix is also a bubbly transparent blue, and the lip has an applied opaque yellow and turquoise twisted thread. Its shoulder is decorated with a partially marvered thread in opaque yellow rather loosely tooled into a meander. It is said to come from Azerbaijan, where excavations have revealed traces of early glass manufacture.

The early glazed vessels from Assur and Ziwiye are antecedents and provide distant parallels both for the ovoid body and wide lip and for spouted vessels . For the subject, there is a duck vessel in enamelled faience from Ziwiye , this latter more naturalistic - with its well-defined neck and head and with a high-collared opening on its back. However, these vessels dated 9th-6th century B.C. are not in glass, are less stylized and show other differences, but they do imply that the present rhyton harks back to an earlier tradition.

Ducks, like other animal-shaped vessels, were used for pouring out wine as a substitute for blood libations, banned in early times probably with the advent of Zoroastrianism .

What is most revealing is the decoration on a blue background of wavy and zigzag yellow and white lines, similar to that on Greek-shaped glassware of the Mediterranean basin, contemporary with the Achaemenid Empire.

This duck rhyton of stylized form must belong to a region south of the Caspian Sea, artistically peripheral to Achaemenid court art, an example of the adaptation by local artists of Eastern Mediterranean glass techniques to an iconographic tradition harking back to earlier times.