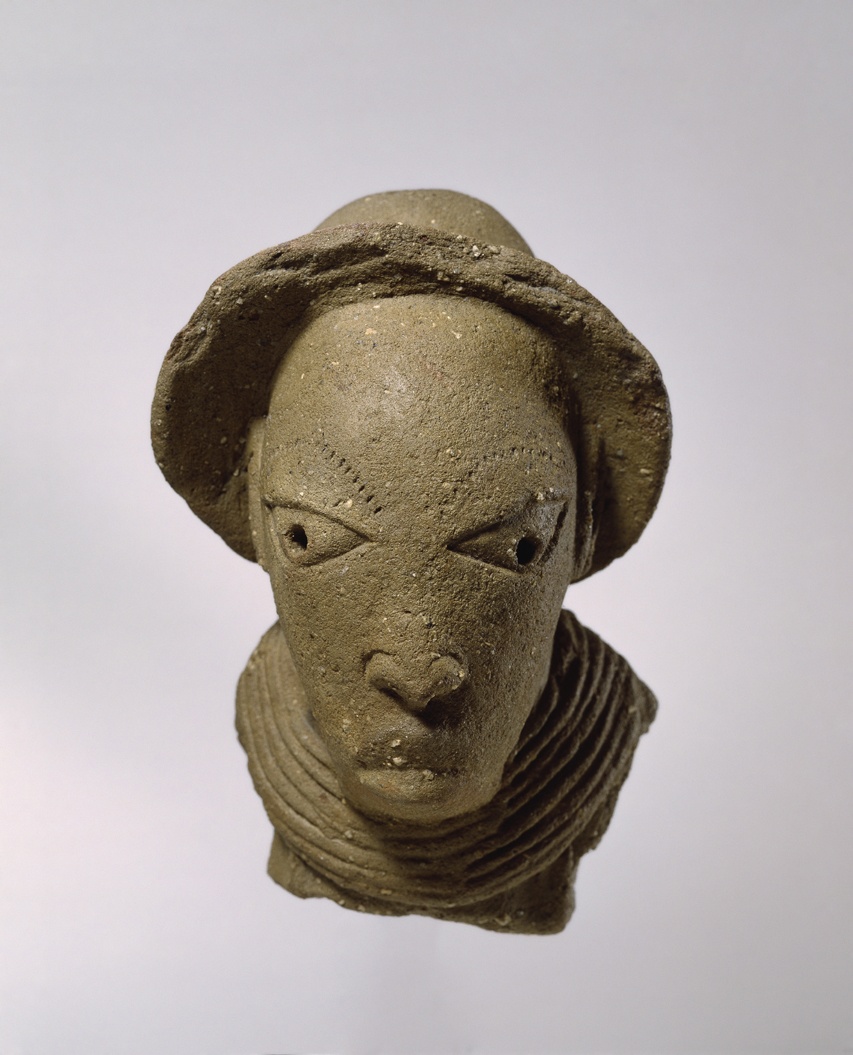 Nok terracottas were built up in wet clay, parts formed by cutting away and while still plastic certain details incised and impressed on the surface before firing. This example was built up piecemeal, traces of fingers and of a rudimentary implement still visible on the inside.

Surface adornments such as tresses of hair would have been made separately and applied, and the terracottas may have been covered with a slip before burnishing. This head is of a grey red clay mix with small particles of quartz and mica.

The face has the typical Nok style almond shape of eyes, punched eyebrows and the ears, outlined by two braids of hair, are surmounted by a cross which may be the artist's signature. Both the pupils and the ears have been pierced. The head is surmounted by a cap and the neck is adorned with thick strands that may represent necklaces of plaited fibres.

Bernard Fagg saw a similarity in the shape of this head with one[1] in Jos and with two figures [2] also in Jos. We think that the smaller kneeling one [3] is probably by the same hand as the present head [4].

Nok is the name given to the culture because the first terracotta sculptures of this hitherto unknown art were found six to forty-two feet deep on the western part of the Jos Plateau, in a village called Nok where tin was being mined in alluvial deposits.

The first example appeared in the 1920s, unidentified, and in the 1940s, Bernard Fagg proceeded to look out for and collect these terracottas. The dating is based on radio carbon and geological data.

The previous owner of the present example, a professional white hunter in Nigeria who later retired to England, told me the following: "The actual date of the finding of this (head) is not known. It was found by a Koro pagan hunter 'many years ago' when hunting at Nok. His village was Masaru, about 12 miles west of Nok, in the Zaria province of Northern Nigeria. We hunted together for many years and before he died, as I was travelling at the time, he told his eldest son to give it to me, saying, to 'bring me luck and safety in hunting'. My Koro friend had set it up in his abode and always made offerings to it before we left on a hunting expedition and, though we had some very narrow escapes, no harm ever befell either of us".

We wonder whether the head had something to do with this.

Evidence so far and conjecture point to the Nok culture being an agricultural society proficient in iron smelting and forging. A society hierarchically structured with a common religious and/or political focus.

The Nok people probably practised ancestor cult and believed in witchcraft. An element of ancestor worship is usual in West African belief.

Religious in purpose as evidenced by their subject and attitude, many of the Nok terracotta figures were cult objects and commemorative figures representing deities, spirit figures, mythical beings or deified ancestors. The sculptures are imbued with both vitality and life. The strength of the psychic content that we feel inherent in this head leads us to see in it an expression of its importance as the seat of vital strength.

Nok sculpture in terracotta, the oldest we know of in Africa so far, is of such sophistication and technical excellence that it cannot be an act of spontaneous creativity and must be preceded by a developed tradition. It has high artistic merit both in form and beauty. Furthermore, it may possibly have had a profound influence, even if only a collateral one, on subsequent Yoruba art tradition, after having meanwhile contributed to various expressions of terracotta sculpture.

Though the transition in time and space between Nok and Yoruba is largely unaccounted for, we feel that future discoveries may give the answer, as was the case with Greece for the period between Mycenaean and Geometric.

4 On account of its appearance and the feeling which it exudes.