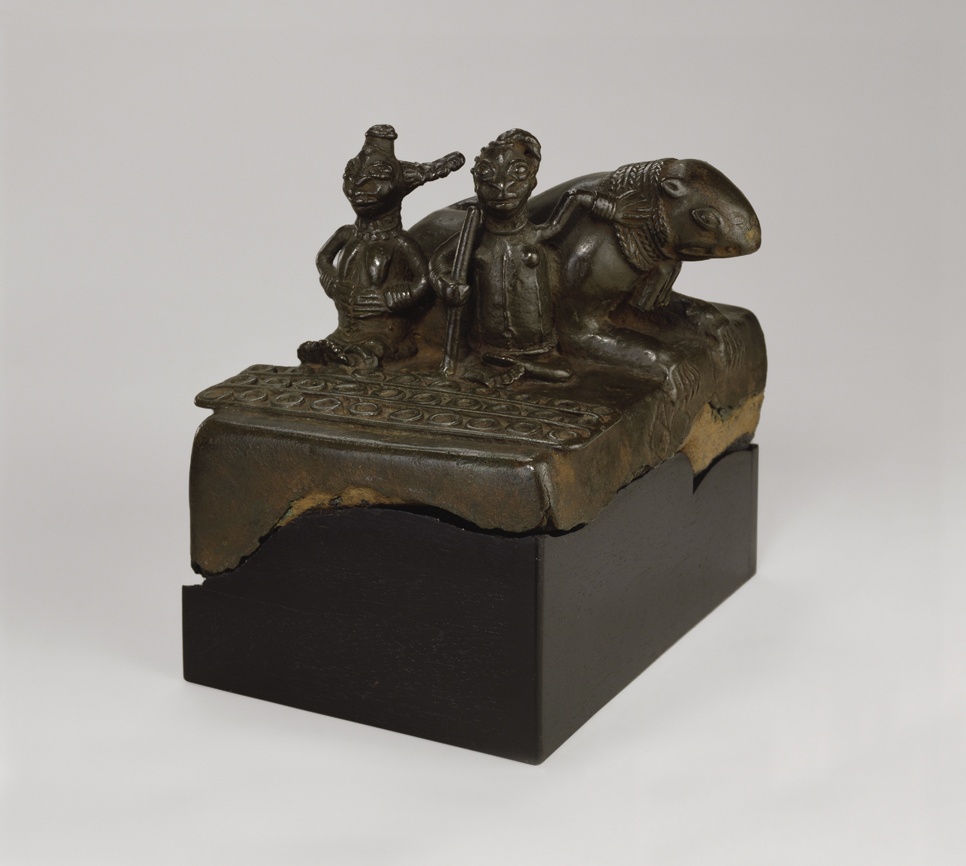 Cast by the lost wax process. Most of the sides, front and bottom of the rectangular box-like altar are no longer extant, probably owing to the thinness of the casting. Thickness of bronze sheet: 1-1.6 mm.

Of the core which was not removed after casting, a substantial amount remains. The casting itself bears testimony to the prowess of the artist.

The group is on a rectangular box-like altar that has a central band of lozenges at the back which also ran in front. It is dominated by a recumbent quadruped with a long tail, wearing a very broad collar composed of herring-bone strands from which hang three bells under his throat. The quadruped is probably a leopard, though he could be a mongoose or a mythical animal.

Seated against him are the figures of a male with crossed legs and a female with her legs outstretched wearing anklets. Both figures wear five-ringed bracelets around their forearms and the male holds a staff in his right hand, his left hand resting majestically on the quadruped's collar, while the female with her hands over her stomach, seat of her fertility, also has a royal bearing. She wears her hair in a most elaborate fashion, plaited in two stiff braids (the right one broken and missing); on top, her hairdo would appear to finish in a bun. Between the braids at the back of her head there is a knob which is usually considered a symbol of royalty. She wears a double-stranded necklace, whereas the male wears a richer, single-stranded one and his elaborate hairdo is topped by a projecting braid.

In front of both figures is a gaming board composed of three rows with ten circles in each, probably for mancala (ayo).

W. Fagg [1] is responsible for having set apart a remarkable group of sculptures in bronze which, though very different, probably all originated in the Lower Niger, hence his grouping them under the title "The Lower Niger Bronze Industries". Fagg considered that they obviously had been made by different tribes, but we are not able, at this stage, to attribute any with certainty. As he brilliantly observed, they are highly original and distinctive and, however different, conceived with a similar sensitive understanding. We agree with him that they have an exciting and moving beauty.

Notwithstanding the difference in subject matter and in execution, one may note certain features common to both our group and the famous Lower Niger hunter [2] in the British Museum: around the latter's base one finds the same circles as on the gaming board, and the hunter's dog, like our leopard, also wears a collar with one hanging bell only. A certain affinity in spirit emanates from both groups.

We believe that we are in the presence of what Margaret Trowell[3] would call "Spirit-regarding art", confronted with a royal couple and the leopard, as a mythical animal, embodying the power of royalty.

We think that our group's appurtenance is to ritual and that it probably expresses the African sense of the unity of the spiritual and the physical world and served a purpose in harnessing spiritual power for the benefit of the living members of the community.