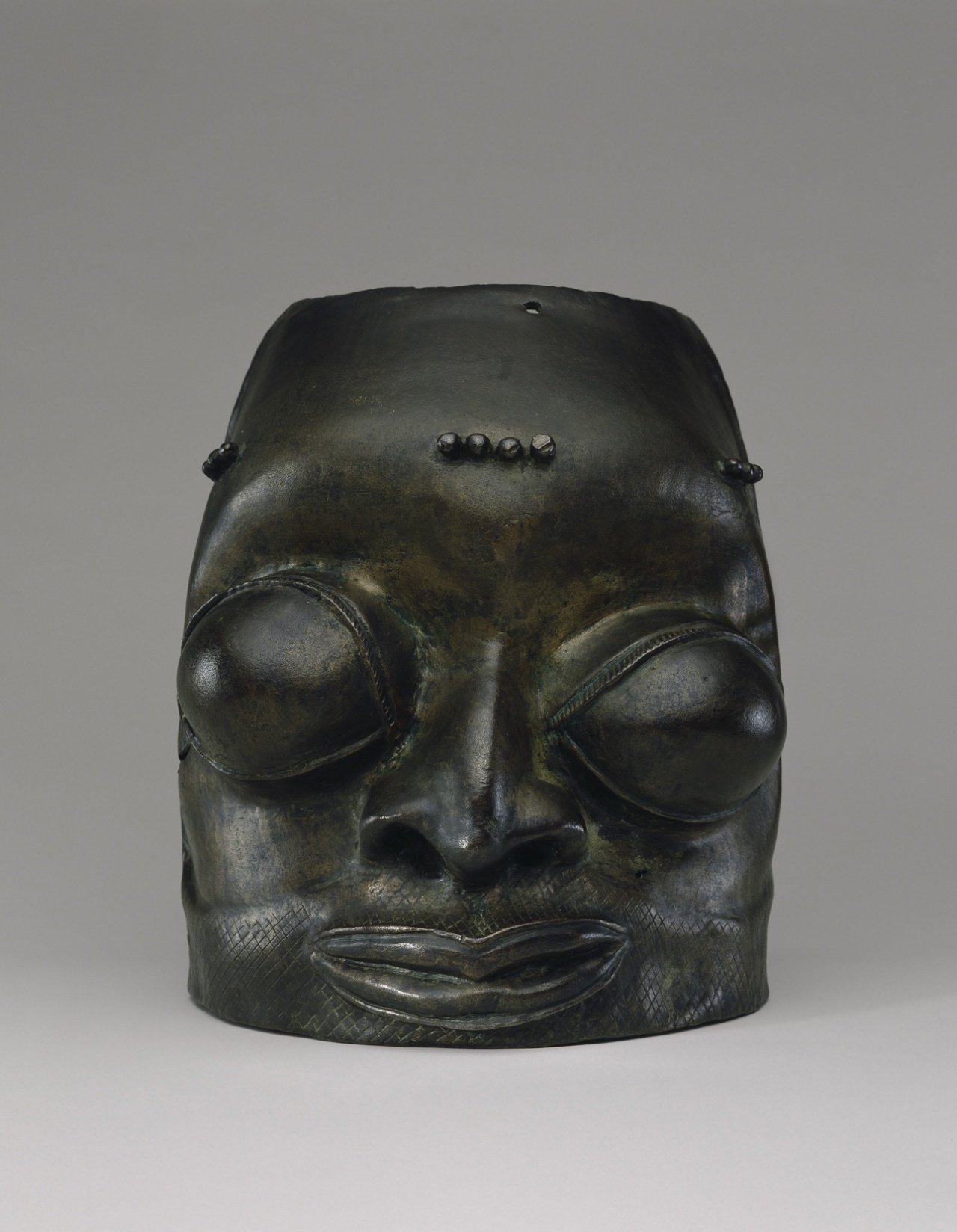 Cast by the lost wax process, the underneath with an internal flange mostly bent in and with parts broken and missing.

Patina: blackish-brown to medal colour with traces of green chloride in certain recesses.

Yoruba kingdoms with their divine kingship, which was far from absolute since they consulted their peoples through a group of chiefs [1], were centred in such towns as Oyo, Owo, Ijebu and Ife, and go back over a millennium.

Their religious belief was in a cosmos [2] divided into two distinct but inseparable worlds: aye, the visible tangible world of the living, and orun, the invisible spiritual realm of the gods, ancestors and spirits. Aye and orun were (competing) forces in the cosmos exemplifying the tensions as well as the resolutions of conflict. Among their gods, Olodumare was creator of life and of ase, the life force. Individuals like the gods were invested with values, good and evil, but it is their modes of action which differ as they realize their ase.

In art it would seem by observation of their respective works that the Yoruba must have had strong artistic ties and a "close on-going relationship with Benin" [3] .

Our head was found during the British Benin punitive expedition in February 1897 in Benin City. Made in the Yoruba tradition: though possibly in Ijebu [4] it could very well have been made by a Yoruba artist in Benin City and it is even conceivable that "Bulgy Eyes" [5] could be a late Ife work.

This bronze head bears tribal markings above the eyes and on the forehead. On either side of the Bini-like ears hang coral pendants with small crotals or nuts at their end. On the back of the head is something of indeterminate nature, either a rattle, bell or large nut. The hair and beard represented by cross-hatching which extends also above the upper lip.

With its immense bulging eyes and wide, hooked nose with flat nostrils, this head is one of the most extraordinary expressions of African art. We see in it the essence of Nature's savagery and the "bulging eyes represent an extreme of the Oshugbo convention suggesting spiritual force and presence." [6]

It is precisely such a masterly achievement that ranks African sculpture among the great art achievements of mankind.

It may have been placed on a royal ancestral altar, found in what Pitt Rivers called "Ju-Ju" houses and would have been used in spirit cult. It could have been surmounted [7] with a headdress, as Drewal suggests. By its mystical strength, we feel that this unique head is a universal work of art.

5 We are grateful to Frank Willett for reminding us that, since this is an unique work of art, it is impossible to make a definitive attribution given our present knowledge, and for pointing out that "he has a number of features in common with unpublished Ife works". We are also grateful to Hermione Waterfield for her suggestions.

6 From text of label for "Bulgy Eyes" in the New York venue of the exhibition Yoruba. Nine Centuries of African Art and Thought.

7 It is unlikely that it served to hold an elephant tusk as some of the tall and heavy Benin heads of later periods did.