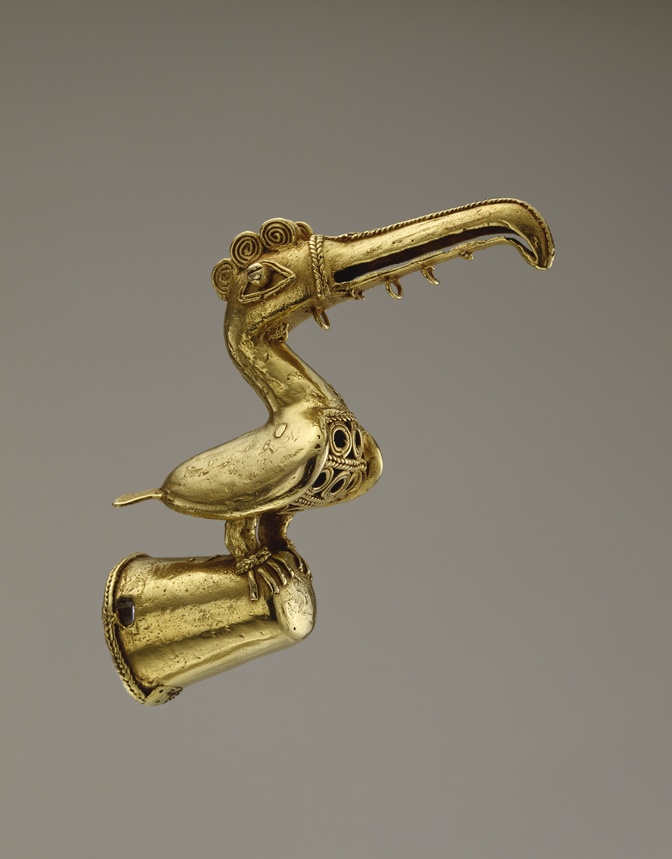 Cast by the lost wax process, this finial in the form of a bird hasbeen described as tumbaga with an enriched [1] surface, now we prefer to call it gold [2].

Condition: two of the loops under his beak missing. A few casting flaws mainly at the butt end of the finial with two holes and two repairs by the addition of annealed gold patches. A further large patch on the lower front of neck to the left.

The bird appears to be a toucan. He has slit eyes, a crest of spirals surmounts his head and under his long beak are small loops from which probably dangled gold pendants.

The toucan perches on a socket that may have been attached almost horizontally to a ceremonial staff; it is possible, though unlikely, that it served as the hook of a ceremonial spear-thrower.

The finial attests to the high degree of artistic and technical development achieved by the Pre-Columbian goldsmiths.

"In the sixteenth century the Sinu was one of the richest and most populous areas of Colombia. Juan de Castellanos (1589) noted that the Sinu goldsmiths made 'figurines of various kinds, aquatic creatures, land animals and birds, down to the most lowly and unimportant; also javelins with hoops of gold of various sizes, or covered with gold leaf, and large drums, flutes, vessels of diverse kinds, and models of flies, spiders and other unpleasant insects.' " [3]

The products of the Sinu goldsmiths were widely traded.

In the Autumn of 1960, the Epstein collection of tribal and exotic sculpture, the best private collection of its kind, was shown in London. I barely managed to rush through it in thirty-five minutes on the miserable closing day. It was drizzling and foggy, night was falling - the light in the exhibition was bad. Suddenly, in the angle of a case, the bird shone like a bright sun, a ray of hope.

Shortly after Epstein's death in 1961, Lady Epstein entrusted the collection to Charles Ratton for sale and I was able to acquire the bird. Upon visiting Lady Epstein two years later to thank her for facilities extended to me, she said: "By the way, did I tell you that my husband had been wearing an old tweed jacket for the last two days of his life and that when I hung it in the closet after he died I noticed a big bulge in one of the pockets, it was your bird."

I am touched by the thought that during the last two days of his life Epstein had fondled the Sinu bird.

Exhibited:
Gold of El Dorado: The Heritage of Colombia, no. 235.

1 Tumbaga is gold with a high copper content of which the surface has been enriched. It used to be thought that this enrichment was obtained through adding and applying gold by amalgamation (the mercury then evaporating); recent scholarship inclines to the technique of depletion gilding, which is the process of leeching out copper by means of acids, leaving a purer gold on the surface. In practice, this means heating the object, resulting in an oxidized black surface to which one applies the acid, lemon juice or some other mixture, to remove the oxidization. This operation is repeated as often as required. What comes to the surface and oxidizes is the copper. After sufficient surface copper has thus been removed, the cleaned surface may be burnished resulting in a beautiful shiny gold.

2 In both the Epstein and Primitive to Picasso catalogues this bird is described as gold. In the Gold of Eldorado, W. Bray called it "cast tumbaga with enriched surface" which this writer adopted for the exhibitions L'Or et son Mythe and Circa 1492. Upon re-examination and observing not the slightest trace of copper carbonates or chlorides, which necessarily would appear over half a millennium, we conclude with the most competent living restorer from Colombia that this bird ought to be qualified as gold. The copper content is insufficient to justify the term tumbaga.