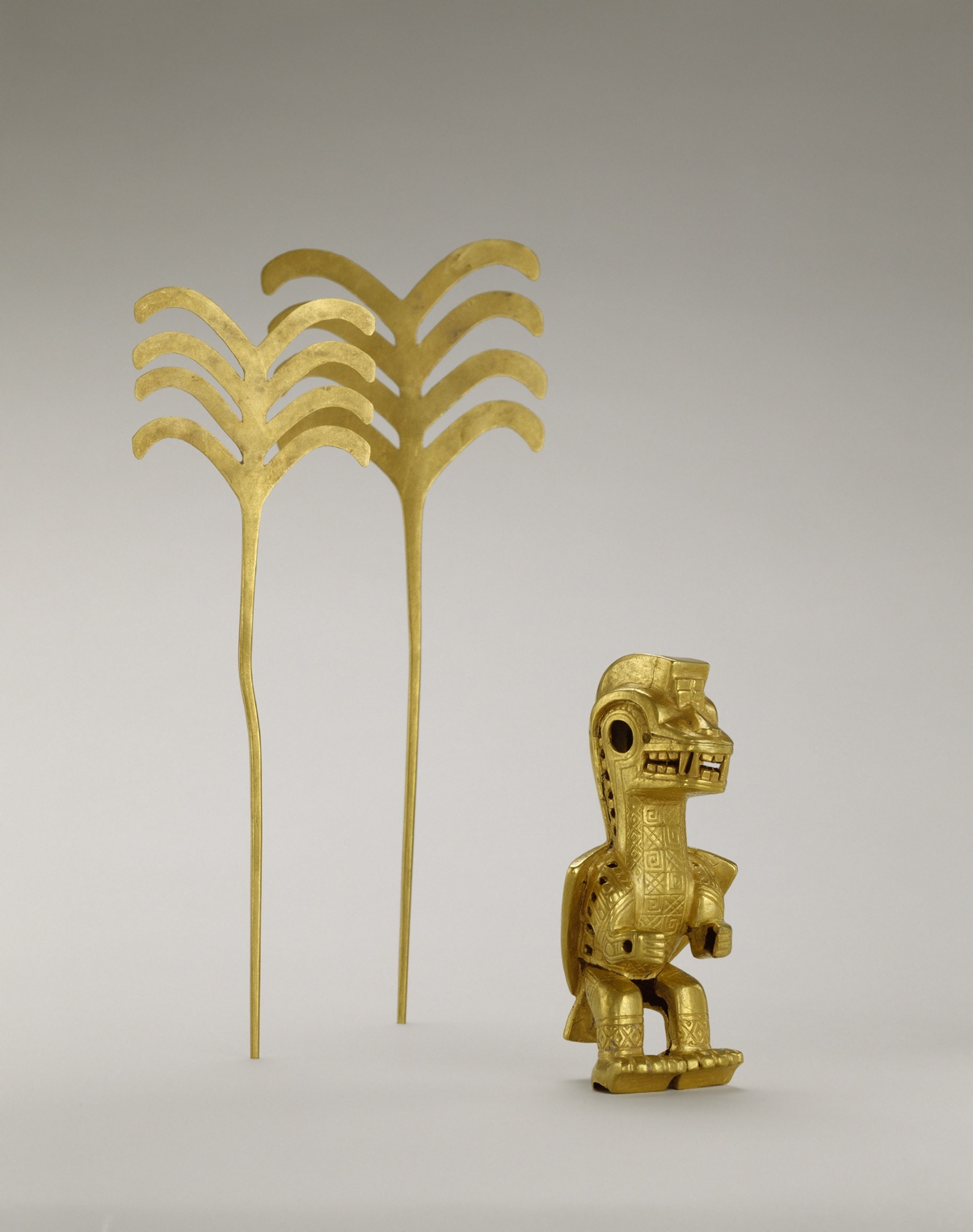 The palm trees were made of gold [2] by casting the general outline, a pin surmounted by a thick plate. This was hammered and heated as required, the branches were cut out after the correct thickness had been achieved.

"Godzilla" was made of gold sheet in six parts [3] : the face with the front including the upper arms to the groin, the wing-like back with the rest of the head, the two forearms and the two legs. The sheet would have been hammered to a correct thickness, heated to render it highly malleable, and this was repeated as needed. It would have been cut to the size required, roughly worked to shape and then possibly fixed on to a wooden statuette [4] of "Godzilla" for all the detailing. The legs probably worked in the same way over a wooden form which might have been pegged into the statuette's body. The figure was fixed on to its form: the back part held in place by folding over the edges, the front by means of nails [5] inserted in the 28 holes around the contour. On the back of each hand a round hole served the same purpose. The edges of the different sections were folded over each other and burnished. Missing: left forearm with its hand - here a modern restoration.

The items were carefully burnished and polished.

The Pre-Columbian treasure of El Bolo is called the Malagana Culture after the hacienda where found. Probably part of an agricultural centre, a crossroads where different clans came together to trade, it was half-way between the Inca civilization to the south and the Caribbean to the north.

Located about 800 to 1000 m above sea level in a fertile agricultural valley with a tropical but dry climate.

The Malagana gold items, both cast and hammered, are of able workmanship revealing a sense for form, more stylized and less baroque than, for instance, Calima objects. Many of the hand-modelled figures, anthropomorphic and zoomorphic, represent wild animals, jaguars, tatous (armadillos), monkeys, tortoises, frogs, bats, and all sorts of birds. Included in the find were great masks, many with pendants, an extraordinary crown, and innumerable representations, covering objects also from Calima, San Agustin, Tolima, Tumaco, Tierradentro, Quimbaya.

"Godzilla" represents an anthropo-zoomorphic winged figure - mythical and heroic - an ancient cultural image which combines human, bird and reptile attributes. His head is crested and animal-like, its hollow eyes were once inlaid and its open mouth has rows of sharp teeth. The position of his hands would suggest that they held something.

He is an expression of the belief that in early times there was no strict division between man and animal. Both beings could transmute, each to the other; and animals had the faculty to talk. Still today, there are shamans who believe that with the help of hallucinatory drugs or prolonged fasts they can transmute into jaguars, certain types of birds, and thus visit the supernatural world. "Godzilla" may be a fabulous creature or represent a shaman transformed into an heroic figure of the past, a fusion of animal and human traits in probable reference to a pantheon.

The palm trees were fibulas for clothes or used to remove lime from the poporo (lime flask). Palms were important in ancient Pre-Columbian societies for their fruit rich in protein and fats, and for their fibres used in clothing. In the form of fibulas they also fulfilled religious-mythological functions. They were used in initiation ceremonies for males at puberty, when the shaman would hand them a small calabash saying "Now I give you woman as you are now a man, I give you woman". Following which the adolescent perforated the poporo with the pin of the palm fibula to symbolize coïtus.

The fibula and poporo served in everyday life, and on various social occasions; they stood for certain concepts and were used in association with whole series of formulas, gestures and positions.

The two male figurines were solid cast of gold and chiselled in the cold.

The bird-pin was made as the palms but with a small plate on top, not on the same plane, probably thicker and horizontal. After repeated hammering and annealing, the wings of correct thickness would have been detoured by cutting, and the whole cold-worked.

The two small male anthropomorphic figures belong to the Calima Culture which was characterized by class divisions. They may be dancers, indicated by the position of the hands, associated with special ceremonies, votive or funerary, in the latter they would have accompanied the deceased to the other world.

The bird-pin fulfilled the same functions as the palm tree fibulas. Here the bird is shown wings open, in full flight, and his beak may suggest he is a toucan. Birds had various symbolical meanings, one of which would have been a shaman in flight.

Information for this entry has been taken from short unpublished text by L.M Toro Garrido and O. Gomez Palacio.

2The source was nuggets or in whatever form found, usually in the valleys of the Cauca and Magdalena rivers. Such gold often contains natural silver and trace elements of other metals. The mineral would have been smelted into different shaped ingots. Sometimes the natural gold, if deemed pure enough, would have been smelted directly.

3 We are indebted to Walter Haberkorn for the restoration of "Godzilla" and for various technical explanations. He undid the poor glueing, worked on the joining edges slightly distorted, consolidated the fissure on the right side of the head and put the six parts together again using acrylic glues.

4 The holes indicating the use of nails hammered in from the outside make this suggestion the most plausible. It is of course possible that the different parts were worked first in section moulds and with the use of forms made of a mixture of resin, wax and clay, which served the same purpose as the natural bitumen employed in antiquity in the Near East.