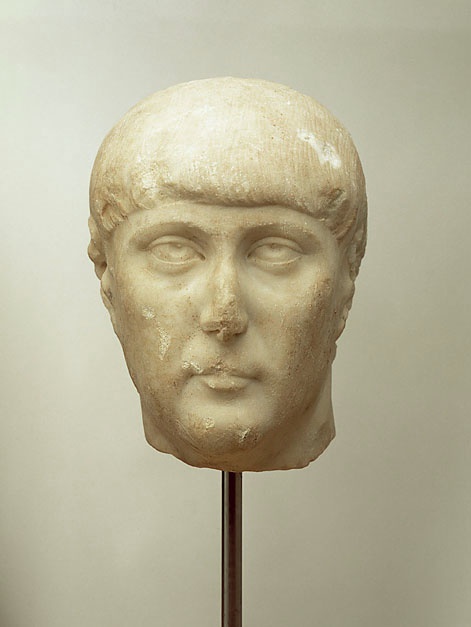 Tight-grained crystalline marble. The present portrait reworked from a head of the Trajanic period as evidenced by the large locks of hair at the back. The surface of the face once polished, lightly weathered. The hair is smoothed down and combed forward somewhat freely and in fine strands from the occiput. The pupils are carved out like large scallops.

Condition: broken at the neck, several slivers above the break. The tip of the nose is abraded, damage to the right nostril. Left ear broken away, the back edges of the right ear severely chipped. Blows and chips to the hair above the right temple and eye, over the left temple and elsewhere. Above the left ear a slice flaked off leaving a rough surface. Nicks to the eyebrows. The right cheek and the right side and centre of the upper lip abraded. Two spots of damage to the left and right side of chin. The surface of the head a creamy white with a very slightly yellowish hue and reddish tinge coming through over much of the head. Traces of granular pinkish limestone deposit. The left cheek stained and scratched, with a small flake.

The portrait may be that of a young emperor or prince of the later 4th century, although there is no imperial attribute to confirm his identity. His hair-style and serious demeanour derive from Constantinian prototypes, but the style is somewhat later and fits either the period of Valentinian I (A.D. 364-375) or early in the reign of Theodosius I (A.D. 379-395). However, portraits of the second half of the 4th and first half of the 5th centuries are rare, and since scholars seldom agree regarding dating and attributions to workshops, this makes a precise identification very difficult.

We note a strong similarity between his ears and those of Gratian, dated c. 375, cat. no. 246. Though we know of no heads of identical style, there are a number of examples which display similar features in a more stylized manner and which may be only slightly later in date. Such may be the female portrait in Copenhagen [1] with a similar mouth, variously dated between A.D. 350 and 450, though we would tend to favour the dating proposed by Kiilerich, c. 390. For the physiognomy, the female head from Side [2] attributed to the Constantinian period bears such close comparison to our head for certain of its features, that one would like to imagine a parental affiliation. These are: the profile view of the chin leading up to the lower lip, the crease going down from the mouth on either side and more particularly the upper lip and the space between it and the nose, and the crease from the nostrils to the corners of the mouth. There is also some relationship to portraits in what L'Orange [3] termed the "Subtle Style" of c. A.D. 400 and stylistic affinities to heads on the base of the obelisk of Theodosius in Constantinople are also apparent [4].

The head retains much of the Constantinian style while anticipating the portraiture of the Theodosian period and may therefore possibly be ascribed to the late Valentinian-early Theodosian period.

4 Dr. Marianne Bergmann, in correspondence (2 January 1991), suggests the Theodosian parallels saying "I find almost everything comparable with the faces on the base of the obelisk of Theodosius, but especially the part surrounding the mouth, the soft dips at the corners of the mouth ... I find the entire structure of the face similar on the 'Aelia Flacilla' and also, if I remember rightly, the faint wrinkles running from the inner corner of the eye into the face. The small, refined mouth with its very thin upper lip and the 'protruding' lower lip is a favourite shape of the period, compare also the portrait that L'Orange has grouped under the heading 'Subtle Style', in particular the two sculptures in Saloniki (AntK 4, 1961, pl. 27)." The present author finds the sculptures in Saloniki a rather distant comparison.

Dr. Jutta Meischner in a letter to the author dated 31 October 1990, in answer to our dating the head post-Constantinian, replied that it was middle-Constantinian. In a second letter dated 5 March 1991 she replied to the author's query that by post-Constantinian she meant 350 and later, and that if she had agreed with the author's opinion formerly, after reassessing the matter she was now sure its dating was late- or post-Gallienic, around 260/270, stating there is too much gentle plastic life in the surface finish, as well as in the characteristics of the carving of the eyes.