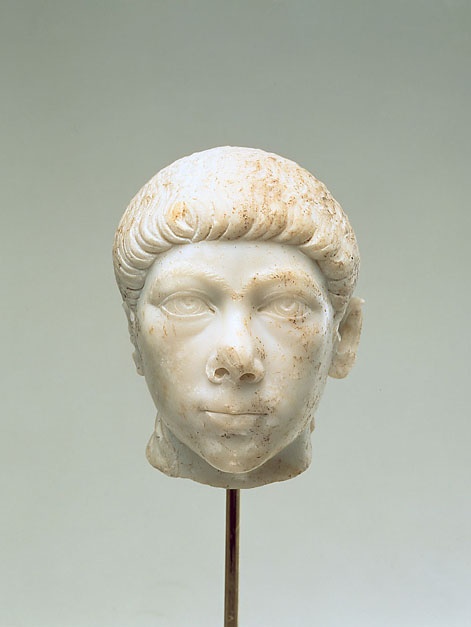 Made of a very fine white to purplish white crystalline marble, the face and neck highly polished in contrast with the strongly different texture of the smoothed hair. The hairs on the ridges of the eyebrows wavy chiselled scratches as though freely drawn. The eyes incised with horse-shoe shaped pupils. At the back,
the head and the edge of the tunic roughly blocked out and left unfinished.

Condition: broken at the neck, the end of the nose chipped on the left side, the edge of the right ear chipped and the left ear rather severely broken. A chip to a hair lock above the left eyebrow, chisel marks visible on the back of the head. The smooth surface of the face cameo-like in appearance. Speckles of brownish limestone deposits and root marks over the whole with a few minor yellowish orange stains.

This half life-size portrait of a boy belongs to the Valentinian period [1] which produced several examples of realistic portraiture revealing individualized characteristics and blending flesh and bone structure naturally and harmoniously. It is almost worked like a cameo so polished and refined is its texture.

The identity of the youth is uncertain but if he is a member of the imperial family, he is most likely Gratian, the son of Valentianian I, who was made Augustus in A.D. 367 at the age of eight. It has been proposed [2] that he could be his half-brother Valentinian II who became Augustus in A.D. 375, but since he was only four at the time this seems highly improbable. It has also been suggested that he more likely belongs to the class of the senatorial aristocracy [3]

The difficulty with an identification lies in the lack of an Augustan or imperial attribute and the fact that the youth appears to be ten or twelve years of age. On the other hand his height, which would have been in keeping with that of the small statue of Aelia Flacilla [4] with its back surface also left unfinished as is the back of his head, is suited to a rare size of sculpture adapted to niches appropriate for an imperial palace. His highly aristocratic expression with its self-assuredness exudes a certain nastiness explicable in an emperor's son spoilt by court life.

1 Adopting the author's suggestion at the time, J.D. Breckenridge (Age of Spirituality) ascribed the head to Gratian and dated it c. 370-375.