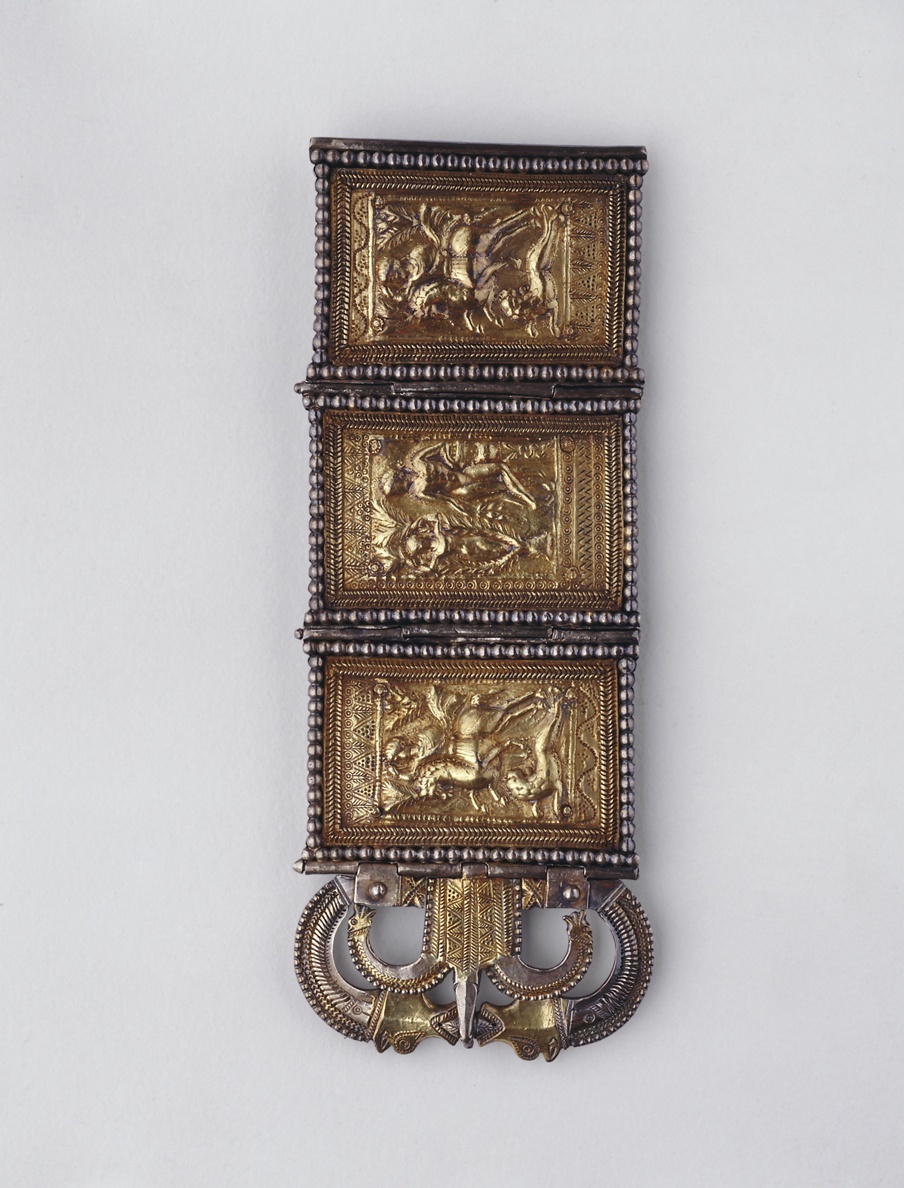 Condition: the gilding slightly worn, the silver parts somewhat oxidized, three of the studs at the back loose; the rectangular plates a little warped.

This belt fitting [2] is composed of three rectangular plaques with a buckle and hinge pin. The central and most important panel shows on its right Apollo leaning on a tripod with a snake, his Delphic attributes, which leave no doubt of identity. Holding a laurel wreath in his lowered right hand and turning his head toward his right he looks detachedly at Daphne represented on a smaller scale as she turns into a laurel tree, seemingly indifferent to his frustration and her transformation. The scene represents synoptically the myth of Daphne of which only two representations are so far known, funerary reliefs in limestone of the imperial period found in Germany [3]. The two panels on the right and left are hunting scenes showing an imperial figure or general on horseback, a lion under his leaping mount turns his head towards his aggressor about to spear him. The sport is taking place in a wood or forest as shown by the trees on the upper corners.

M. Feugère reminds us that in Late Antiquity the cingulum was recognized as a sign of high office of which it became the synonym. Such an opulent fitting allegedly found in Asia Minor [4], representing a classical myth and conferred on a member of the social elite at this time of deep mutation both political and religious, might appear as the vindication of classical culture with its centuries-old roots, when Christianity was spreading throughout Anatolia. It is also to be remembered that during Late Antiquity people continued to learn to read using the names of pagan gods and heroes, and that mythology remained the foundation of a culture that Christians chose to assimilate rather than to replace or fight.

Thus the present belt, like the Thetford buckle with its plaque representing a satyr found with spoons dedicated to Faunus, reflects a pagan subject at a time of great social change.

1 The fitting is composed of a loop and tongue, and three rectangular plates. These five elements are hinged to each other. The loop and the tongue are cut, hammered, embossed and elaborately chiselled. Each rectangular plate is made of silver sheet cut and worked, the central scene repoussé and worked from both sides, the inner frames slighty varying with circles, wavy lines, herring-bone pattern, zigzags and triangles punched and chiselled in; the raised chevron border is separately made from strips of silver hammered, chiselled and cut. Four in number, they are bevelled at the angles and fusion-welded on each plate. The outer border of the plates, a length of beaded wire soldered into place on cusps prepared for each bead on the sheet turned up on top and bottom. The last bead on the lower right hand corner of the first plate has been repaired with a round-headed rivet running through it, its flattened end still visible on the underside. The beaded wire on either side extends just above the transverse beads.

The hinge-pins with their conical shaped heads are slipped through these three-sectioned tubes and flattened at the lower ends, thus holding one plate to the next; the whole sufficiently flexible for the leather belt backing, to which they were attached by the four flat-headed studs on each plate. The studs with mushroom-shaped heads, their stems composed of a silver strip folded over into a tubular section, cut to length and soldered underneath. Four rivets visible in the corners of the central scene come through on the back and fit into these tubular sections. The same principle for tying one plate to the next serves to attach the loop and tongue - the loop by means of two flat strips held in place with round-headed rivets and the tongue with a smaller strip, fusion-welded on the back and on the front worked so as to hide the join.

2 We have made extensive use of the brilliant and very thorough publication by M. Feugère. This appeared three years after his visit in August 1988 to the author, who had pointed out to him that the closest comparison was the gold buckle with plaque from Thetford (Johns, C., Potter, T.: The Thetford Treasure. Roman Jewellery and Silver <London, 1983>) and that the present fitting was to be dated around A.D. 400.

4 Supposedly found with silver vessels: two plates, an oinochoe and a sort of tall bottle, also a bowl that is in the author's collection with a hunting scene - a booted man in a tunic faces a lion with a sort of pig-stick, with rocks and a tree in the background. A punched inscription in Greek would tend to reinforce the suggestion that these objects were made in and for the Eastern Empire (Feugère, M.: op. cit., p. 133).