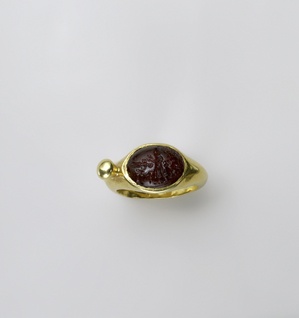 The garnet worked to an oval convex shape; the scene incised using various tools [1] of which the cutting sections could have been of flint, obsidian or emery stone employing drills mounted on a horizontal lathe operated by bow and string and the cutting wheel with the help of emery or diamond dust mixed with oil as abrasive. Straight files were also used. The stone after being finely polished was inset in the ring [2] made of gold, the projecting knob made separately and fusion-welded on. The ring likewise finely polished.

Condition: the surface of the garnet and the hoop of the ring both slightly weathered and scratched.

On the centre of the impression, Abraham facing right raises his hands in offering to God over the head of Isaac represented with hands tied behind his back floating horizontally [3] on his side over an altar [4]; the latter is composed of a stepped base, a column and a capital surmounted by a round slab. Under Isaac's head and pointing to the ground the large sacrificial knife or dagger. Behind Abraham a proud ram advances towards him from under the branches of a tree [5].

Symbolically the scene as it appears in Genesis (XXII, 1-14) reproduces certain characteristics of Christ's passion [6], the father agreeing to the sacrifice of the son who opposes no resistance. It harks back to the earliest church fathers and illustrates the ideal of asceticism and obedience to God [7]. This depicts the moment before God manifested himself symbolized by a hand, not shown here, which illustrated God's divine intervention in time of spiritual or physical peril. The moment when Abraham became aware of the providential ram usually shown in a bush. Here there is no hand and no bush, the tree takes its place. The theme of the sacrifice of Abraham, as it is also called8, was illustrated in early Judeo-Christian iconography in a variety of fashions with differences in detail.

This ring probably belonged to a Christian within the Sassanian empire; though it could have been the property of a Jew, for the placing of Isaac across the altar is only paralleled in non-Sassanian art in the synagogue at Dura-Europos. However, without an inscription it is impossible to determine.

3 Typical for the representation on Sassanian seals which "does not derive from a known early Christian or Byzantine model." (Lerner, J.A.: Christian Seals of the Sasanian Period <Leiden, 1977>, pp. 20-21).

5 A similarly constructed tree but without the smaller offshoots on the branches is to be found on the sacrifice of Isaac on the mosaic from the 6th century A.D. floor of the Beth Alpha Synagogue in the Beth Shean Valley (Weitzmann, K.: The Age of Spirituality <New York, 1977>, p. 369 fig. 45). Sassanian seals with comparable trees (Lerner, J.A.: op. cit., nos. 32, 33 p. 36, pl. IV fig. 25, 26). For another rendering of the sacrifice of Isaac, there is a cornelian intaglio of same shape showing Abraham as he looks back over his shoulder at the ram: Boardman, J., Scarisbrick, D.: Ralph Harari Collection of Finger Rings (London, 1977), no. 99, p. 45.