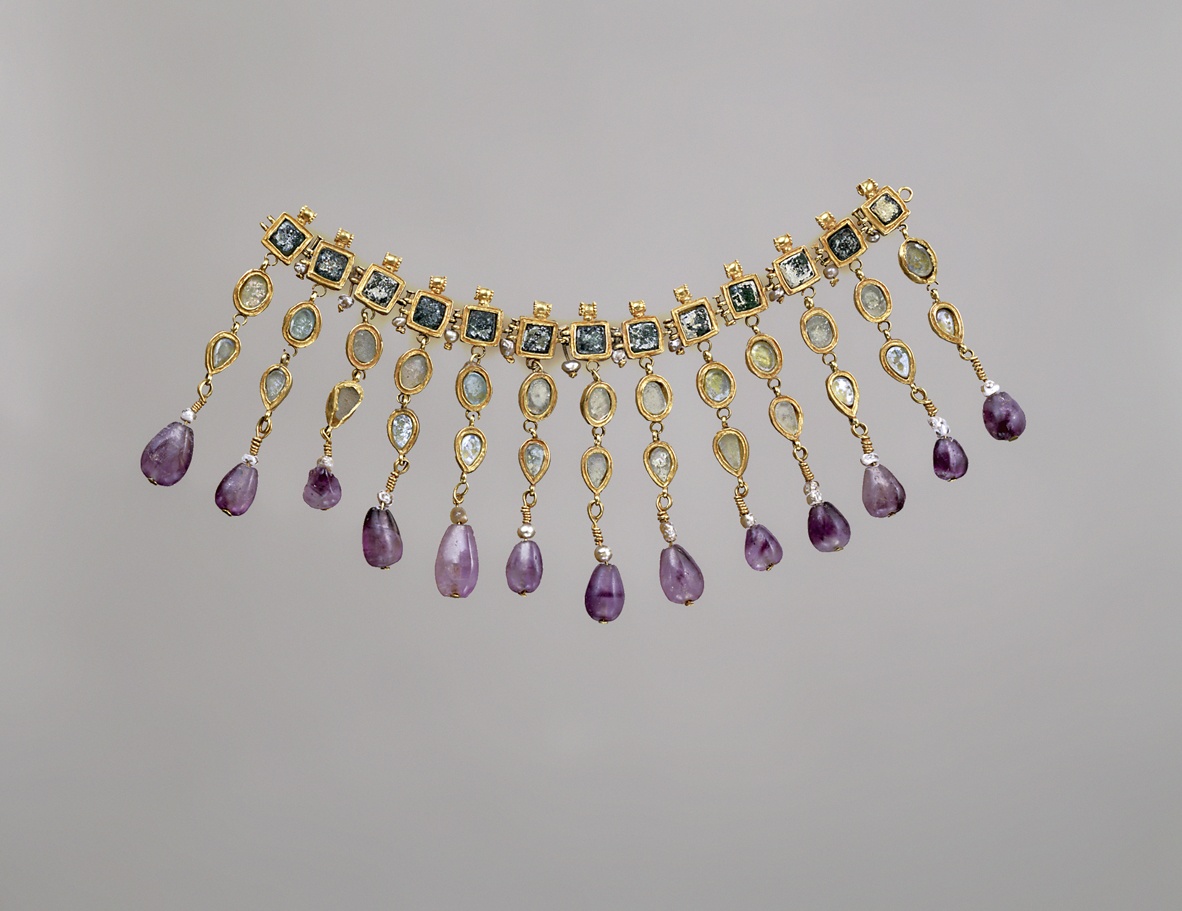 Preserved are thirteen elements of an originally unknown number. Frames of gold foil - square, oval and tear-drop shaped - hold differently coloured glass insets. The frames are shaped in the cold and their backings annealed on, the square ones interlock by hinges: a closed loop inserted between two others, held in place by wire with a flat nail top, a small natural pearl at the lower end, the wire coiled to hold it in place. One loop and one pearl now missing.

The lower oval and tear shaped elements linked to each other by a ring soldered on each, below the tear shaped element a wire is double looped, coiled, one strand for about 5 mm at the end of which is a pearl and a pear shaped amethyst pendant. These held in place by the other strand which passes through the coiled element, the pearl and the amethyst, ending with a flat nail head similar to those on top of the hinges.

On the right end of the necklace is one of the square terminals with a round loop that, connected to the other terminal, probably would have enabled securing the whole around the wearer's neck. On the left end two loops indicate that an unknown number of elements with the terminal one are missing.

The tubular elements on top of the necklace, made of gold strip folded over with beaded extremities fusion-welded on, are soldered onto the square frames and were probably strung on a gold wire or thread to enable dual hanging or serve as the safety clasp.

Condition: the glass insets iridescent, originally a very light green; the square ones - emerald green and blue green - presently green with white iridescence, the oval and tear shaped ones nearly colourless, somewhat opalescent. Grooved parts
in the gold frames reveal red toning due to decomposition of the alloy.

We know of no close comparison.

Various elements of this necklace are to be found in jewellery of the period. A slightly later example [1] though very different does bear comparison for the square shaped elements with insets, the type of mounting, the rings and for the terminal pendants - here described as aquamarines. Such a technique for mounting precious stones in gold conforms to an ancient eastern tradition [2]. This and other of the necklace's features are in keeping, and that is why different parts may be documented to as early as the 1st/2nd century A.D.: example a pair of Roman ear-rings found in Syria [3] for the little danglers with their closed loops, coiled wire and little pearls; a pair of ear-rings in Baltimore [4] - though of slightly later date - for the insets, the ring connections, the terminal pendant.

The influence of such workmanship can be observed in different parts of the ancient world over a period that covered the 1st millennium A.D. For instance, many of its features and those of this necklace are to be observed on different items of the famous Guarrazar Treasure [5], some of it possibly made in Constantinople itself, the rest locally in the royal Visigothic workshops in Spain.

Such necklaces, the apanage of ladies of royal households, the very powerful and the rich, must have been in fashion from the 5th through the 7th centuries A.D. Unfortunately, precious metals and jewellery mounts were generally melted down and the stones reused, and jewellery is hardly ever found in buried treasures but almost only, and that very rarely, in the odd tomb that has not be rifled between antiquity and the present day.