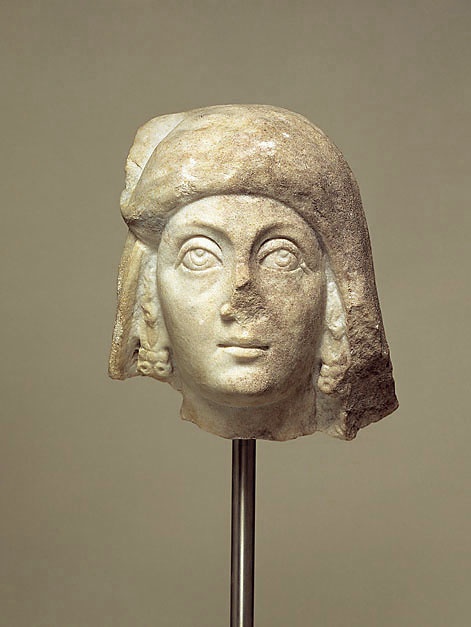 Sculpted in large-grained crystalline off-white marble with a bluish grey vein running through the right side of the veil ending towards the lower right eyebrow.

The representation and date of this head pose an enigma. Various scholars have dated her differently. J. Meischner [1] simply calls her a veiled female head and would place her in the post-Theodosian period, in the third quarter of the 5th century. J.D. Breckenridge [2] calls her a magnificent example of metropolitan portraiture from the post-Justinianic period and dates her in the mid to late 6th century mentioning that the closest analogy [3] was the Head of the Virgin in the 6th century icon belonging to St. Catherine's monastery on Mount Sinai. D. Stutzinger [4] calls her portrait of a lady of high rank and dates her in the mid 6th century. S. Trümpler [5] (under H. Jucker's editorship) calls her a young woman of the late-Theodosian epoch and dates her around the middle of the 5th century A.D.

The author is not yet prepared to abandon his original impression, namely that she is a life-size representation of the Virgin Mary, the only one so far known having survived from before the iconoclastic period which started around A.D. 726. He sees in her face a dichotomy between the virginal purity and youthfulness of the lower third of her face, mouth and chin, with the melancholic sad expression of her eyes with the furrows at the bridge of her nose, expressing pathos and suffering in keeping with the characteristics that would befit the Theotokos.

The analogy with the Virgin and Child in St. Catherine's monastery [6] is telling for the frontal position and other details. It is to be noted that the veil on the right side of her head must have flown behind her shoulder, the same as it would appear on the left side of the face, where it might have come forward in front of her left shoulder, possibly indicating that she held Jesus in her right arm, either seated or standing. If so, this might express a contrast with her air of pathos, possibly little visible in the dimly lit church with daylight filtering through alabaster windows.

In the catacombs of the Coemeterium Maius in Rome there is a painting described as the Virgin and Child with a Chrismon [7], and she wears jewellery. However, K.S. Weitzmann explained to the author that after the Council of Nicaea A.D. 325 it would have been impossible that the Virgin wore even hair-rings in the East. The author wonders whether such rules would have been adhered to so strictly so far from the capital, for if she comes from Pamphylia where there are many monasteries, her surviving the iconoclastic period could be explained by the Sassanian-Byzantine wars of the 5th/6th centuries A.D. when she might have been buried.

Of course, it may be safer to express the possibility that she is simply a lady of high position portrayed with a spiritual aura.

1 In the text of a lecture that she had given on the subject of portraiture in the post-Theodosian period up to A.D. 500 and of which she kindly sent the author her manuscript (5 March 1991).

3 Adopting the author's suggestion of 27 September 1976 and stating "which has similar fullness of modeling, pursed full mouth, and even the same slight double chin."