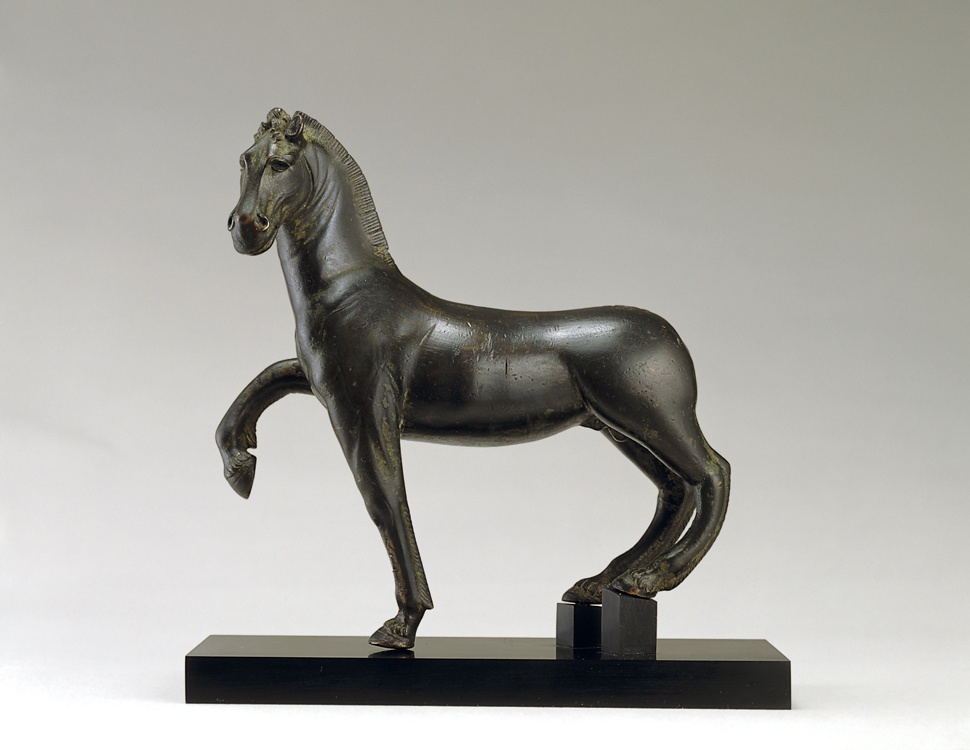 Cast [1] by the lost wax process, the missing tail was cast separately and inserted. The hollow eyes were formerly inlaid, probably with glass paste. Above the rump a square patch with iron deposit and a small one on the right thigh. Very carefully cold-worked with veins, muscles, knee joints and anus [2] highlighted, as also the hair of the coronets and on the back of the legs. The features of his head realistically detailed.

Condition: patina a blackish olive green with undertones of medal bronze, yellowish, slightly reddish metal showing through in places. Traces of earth deposits. Part of right ear broken off, hind legs bent up inwards; gashes on the lower right side of the body, the odd nick elsewhere and a small casting fault at base of left side of mane. The muzzle weathered.

The most pertinent comparison for this horse is to be found on the so-called "Barberini ivory" showing a triumphant emperor, possibly Justinian (527-565), celebrating his eternal peace with the Persians. [3] It reveals similar stylization for the body and particularly for the head with its different features, most especially the muzzle, and also for the folds around the neck. Other details are very similar, among which the hooves, coronet, pastern and the elbow. This elegant short horse with his heavy rump, his powerful chest, neck, withers and shoulders, is surely characteristic of the breed of horses that served the emperor, his generals and officers in the Byzantine army.

It has been suggested [4] that his raised front leg in combination with the turn of the head and the direction of the weight-supporting left front leg corresponds to the Greek schema for the left inner horse in a quadriga. There may be a rapport with the monumental gilded bronze quadriga [5] until recently [6] on the façade of S. Marco in Venice, where it had been taken after the looting of Constantinople in 1204. The group had been brought to the capital of the Eastern Empire and erected with a chariot carrying Helios on porphyry columns in the Milion by the Emperor Constantine. Our horse was probably part of a small quadriga, and possibly one of Helios.

1 The bronze feels heavy and solid: visible through the hole where the tail was attached is a narrow hollow about 3 cm in length. Without x-ray we are unable to tell whether solid-cast or hollow-cast. The head and legs surely solid-cast, the body probably so, though if not, very thick-walled with the core still
in place.

2 Its representation is unusual and unknown to us elsewhere on small bronzes, though it is featured on the horses of S. Marco.

3 Paris, Louvre Museum OA 9063: Byzance. L'art byzantin dans les collections publiques françaises (Paris, 1992) no. 20, pp. 63-66. This comparison was already established by the present author in Art Antique, no. 389, for which he wrote the entry.

6 Replaced by copies, the originals in the Museum of the Tesoro del Duomo.