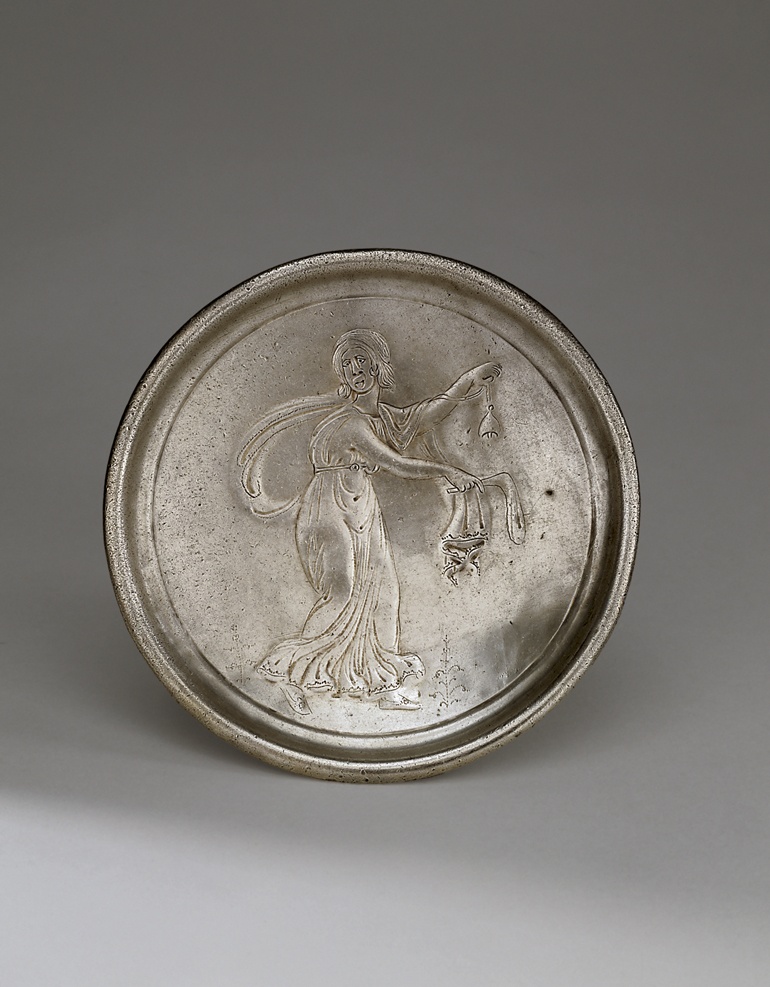 Hammered, punched, chiselled and chased. The maenad on the face of the plate embossed by repeated hammering and chasing, working up the relief and pushing back the background. The foot-ring made separately and fusion-welded on the underside, five stamps struck on with a die within its circumference.

Condition: the surface on the edge of the plate and especially on the side behind the maenad starred with a multitude of infinitesimal nicks. A pointed dent next to the roptron, the whole plate somewhat worn on both surfaces, its edge worn and nicked, the foot-ring slightly bent. The silver lightly stained and with a few blackish traces.

The face of the plate is decorated with a maenad dressed in a sleeveless long chiton girded below the breasts and a himation. She advances almost in a dance-like step, as she looks out from the plate, her left arm extending forward holds in the upraised hand a bell, while her extended lower right hand holds a roptron [1]. The back of the plate has a leaf-scroll between concentric lines around the foot-ring which encloses five control stamps of varying size and content which date the dish to the later part of Justinian's reign (527-565).

The closest parallel for the maenad is the later and larger plate of a dancing maenad with Silenos in St. Petersburg [2] which also has five control stamps. A closer comparison for the maenad's stance is the tondo of a plate in Berlin [3] which has been dated in the 4th century A.D. as coming from Thebes in Egypt and must be a classical predecessor. On both plates the scene is outdoors, as shown on the back of this dish by the leaf-scroll and the suggestions of plant life on its face. For the roptron a fragment of a large tapestry in Riggisberg [4] , also from Egypt and dated to the 4th century, illustrates a figure holding one [5] in a Dionysiac scene.

It has been said that our dish is from the same workshop as the plate, also in St. Petersburg, from Ust'-Kishert' [6] near Perm, on account of the foliate design on its face and the control stamps at the back.

M.-X. Garezou has identified the instrument depicted in these various illustrations as representing a roptron, basing herself on E. Bushala's [7] brilliant article on its form and function as a musical instrument - inferred from ancient texts as being a noise maker or clapper to be used primarily to beat time in orgiastic dancing. She concludes that it would have been an instrument with a bronze handle from which dangled a leather strap used to strike, functioning as a percussion instrument (Plutarch). The leather strap might even have been a sort of pouch containing something to rattle that would give two different sounds when striking.

Nonnos, she tells us, reveals its mystical function and thus it is to be considered with the thyrsus and the cista as an essential instrument of Dionysiac mysteries. She deduces that it must have been a polyvalent instrument used in war, in peace, in religious ceremonies, in profane life, and, by interpretation of an ivory in Paris [8], may also have been associated with the awakening of the infant Dionysos.

In conclusion, the present dish is surely a product of a metropolitan Constantinople workshop and illustrates the survival of classical models. Since the meaning of the mysteries was lost, their representation had become innocuous, and during the whole Byzantine period percussion instruments continued, says M.-X. Garezou, to be used. She even adds that Dionysiac music has survived to our days in the folklore of Greece. This author would like to refer to the end of the entry on the parade belt, cat. no. 247, where, as here and in the same spirit, the new Christian religion assimilated the traditions of the past.

3 Antikenmuseum Misc. 10824: Heilmeyer, W.-D.: Antikenmuseum Berlin (Berlin, 1988) no. 5, pp. 348-349. It represents in low relief a bucolic scene with a draped female, child on back, moving forward in the same spirit as the maenad on our dish. There is a very strong similarity in feeling, the tilt of the head, the neck and the general hairdo are similar as are strikingly so the right arm and hand.