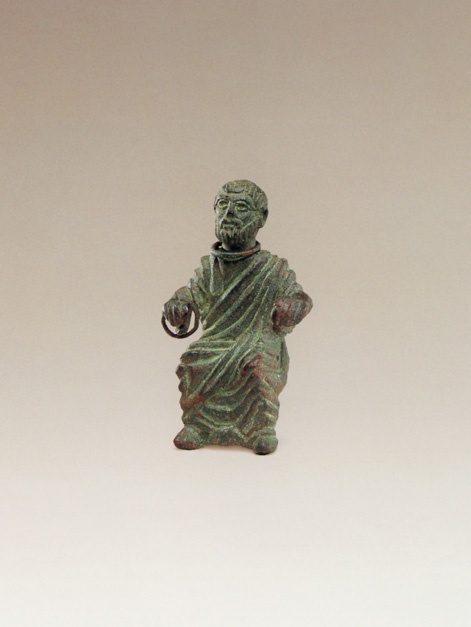 Solid-cast by the lost wax method; the underneath part behind his legs hollow and the edges on either side slanting, indicating that he was probably fixed on a vessel or piece of furniture. Summarily cold-worked, the hair made with a triangular punch and over the forehead with chiselled grooved lines showing it was combed forward. His cloak deeply grooved. A torque around his neck and a bracelet around his right arm made of circles of bronze wire not joined. Condition: patina a greyish green with undertones and spots of red cuprite, traces of earth deposit with yellowish undertones. The right arm slightly bent in, the odd very slight nick or casting fault.

The figure has no close parallel, but the round face with the cropped hair and beard would indicate a 4th or 5th century date. Statuettes of this period may take the form of steelyard weights (see cat. no. 255), wagon fittings [1], elements of lamps, attachments to furniture or other objects [2]. Our bearded figure wears a chiton and himation; his appearance and garb suggest a man of letters, perhaps an official or a philosopher; figures of apostles also derive from such imagery. The meaning of the torque and bracelet are unclear. A bronze steelyard weight of the same period depicts the bust of a young imperial prince or high official [3] wearing a similar torque; maybe an indication of high status reflecting continuation of a Celtic tradition.

For seated figures in the round there is a group of three from a wagon fitting in New York [4]; their iconography is uncertain, but they are surely learned men and may have a Christian identity, perhaps depicting apostles or prophets. However, more pertinent, we feel, are comparisons with several bronze lamps with a Christian subject. The most famous of these is the one in Florence [5], in the shape of a boat, with St. Paul [6] standing and St. Peter seated, holding the rudder.

This seated figure was possibly part of a group and from the position of his hands it may be surmised that he held a tubular element or rope. In view of the rarity of surviving statuettes, the best clues as to what he is about are surely to be found on paintings, mosaics, or sarcophagi. There is a painting in Rome [7], in the Chapel of the Sacraments in the catacomb of St. Callisto, depicting Jonah being thrown to the whale; at the other end of the boat two figures, one still seated, has just let go of his oar, and the position of his upraised hands would appear to indicate that they could have been in a position similar to the hands of our figure. However the painting is still in the first half of the 3rd century, our figure's garb is inappropriate for a rower, and his hands would seem to be on the same horizontal, which might contradict him being a rower unless it be the moment when he is feathering his oar.

Thus, the identity of this statuette remains uncertain but the way his hair is indicated by deep triangles, for which we can find no comparison, his large round head and his expression - the general spirit of the representation - encourages us to date him still in the 4th century. We also feel that there is a rapport between his hairline, his beard and his expression with a bust on a funerary slab from Tabarka [8] which would agree nicely with the indicated provenance.