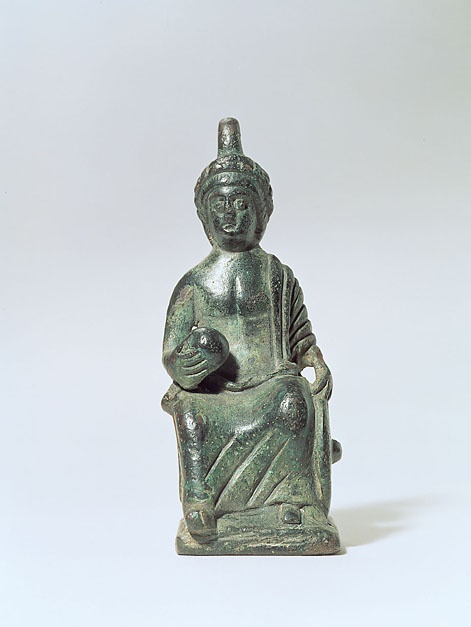 The figure solid-cast by the lost wax process with suspension loop above the head, the lower section - seat with back of shield, cloak and legs - a thick-walled hollow cast formerly filled with lead. Cold-worked with chisel and punch, burnished and polished.

Condition: patina a blackish olive green to lighter green with traces of purplish red and a few spots of bright green chloride, a medal bronze showing through on the left forearm and folds above the left elbow where struck by a tool, probably when found. Light greenish to yellowish earth deposits. The surface slightly worn in places; the front of the right shoe stubbed, damaged and with a nick, the front of the smaller left shoe worn. Under his right hand a bronze lump with a roundish knob of indeterminate nature.

Some half a dozen weights of this type are known but far more numerous are those that take the form of the bust of an empress, tentatively identified as Licinia Eudoxia, wife of Valentinian III [1], and at least once as Pulcheria, sister of Theodosius II (408-450) [2]. All these weights were used with a steelyard and surely took the form of an imperial image to guarantee the accuracy of the standard.

The present example shows the emperor on a seat, its back and recessed side incised with a lattice pattern composed of lozenges with central dot. His head is encircled with a jewel-studded diadem, the insignia of the emperor which under Constantine the Great replaced the former laurel and oak wreath. He is cloaked, holds the globe - another attribute of his status - in his right hand, and his left hand rests at his side on a shield decorated in pointillé with an early cross of eastern origin composed of four triangles of which four points meet around its central boss.

The type for this representation surely started in Rome and stylistically may bear comparison with statues of Tiberius and Septimius Severus carved on either side of the emperor on the Arch of Constantine; but A. Alföldi and M.C. Ross think the iconographical prototype could have been the colossal statue that was in the Basilica of Maxentius/Constantine. A. Alföldi has definitely established their figure type as of Constantine the Great [3]. Two of these, coarser than the eastern examples, are the one in Dumbarton Oaks [4] ascribed to Rome and an example in Princeton [5] said to have been found in Gaul.

The closest parallels for the present example are the one in Berlin said to be from Pergamon [6], dated around A.D. 330 and ascribed to Rome (?), which we would question, and the one from Kherson [7], in the local museum there. They appear so close that the three are in all likelihood from the same workshop. The author agrees that the prototype harks back to Constantine the Great but wonders, in view of the inaccuracy of the portraiture and given that a great many of the bust-weights are generally thought to be representations of Licinia Eudoxia, whether the three which he thinks to be eastern examples might not represent her husband, Valentinian III.