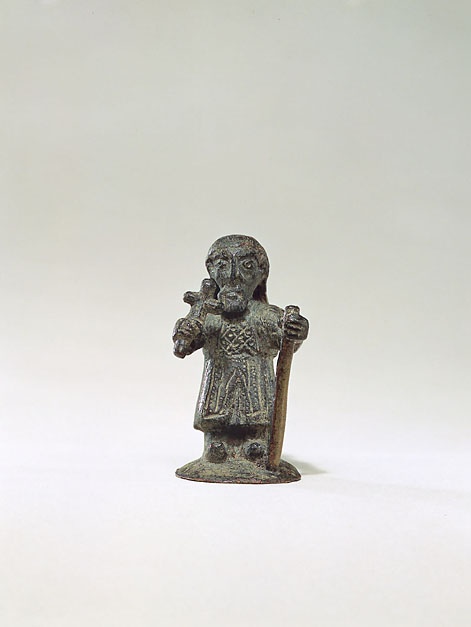 Solid-cast by the lost wax process, cold-worked with punch and chisel and burnished.

Condition: patina a dark blackish olive green with parts a reddish cuprite and yellowish bronze showing through in places, as for instance on the staff with its top missing held in the left hand. Greyish yellowish earth deposits. The underside of the base with slight traces of soldering; probably once attached on a lid.

We know of no close parallel for this bronze, either stylistically or iconographically. Its style is Byzantine of the 6th or 7th century, a period for which we have very few bronze figurines. In the exhibition catalogue produced for Russia [1] he had appeared as "Pilgrim?" [2]. The figure, bearded and carrying a cross in his right hand, is probably a saint; the staff in his left hand may have also been surmounted by a cross. He wears an embroidered tunic, a sort of cloak with a tablion [3] over his chest, belted at the waist, and boots. The costume derives from Roman military garb and is often worn by saints who were martyred soldiers [4], especially in Eastern Byzantine depictions.

His function is uncertain though he may have served as a decorative element, possibly the attachment to the lid of a lamp, a common utensil of the period. These are frequent among a whole group of bronzes from Coptic Egypt that have a distinctive style making them easily recognizable but to which this statuette bears little resemblance. Thus, the alleged find-spot of the saint with his eastern elements suggest an East Anatolian or possibly a Syrian origin.

2 When the author acquired this statuette in 1966 he thought it was a saint, St. John the Baptist or possibly St. Peter. It was suggested to him in 1991 by Donald LaRocca, Helen C. Evans and Bill Wixom of the Metropolitan Museum of Fine Arts that it was most probably a pilgrim. Recently Jeffrey Spier has said "surely a saint".

3 A traditional piece of masculine court costume that from the
6th century onwards appeared at chest level; though generally a mark of civilian status, military saints are depicted wearing over their armour a chlamys adorned with a tablion (Oxford Dictionary of Byzantium, vol. 3 <Oxford, 1991>, s.v. tablion
p. 2004).