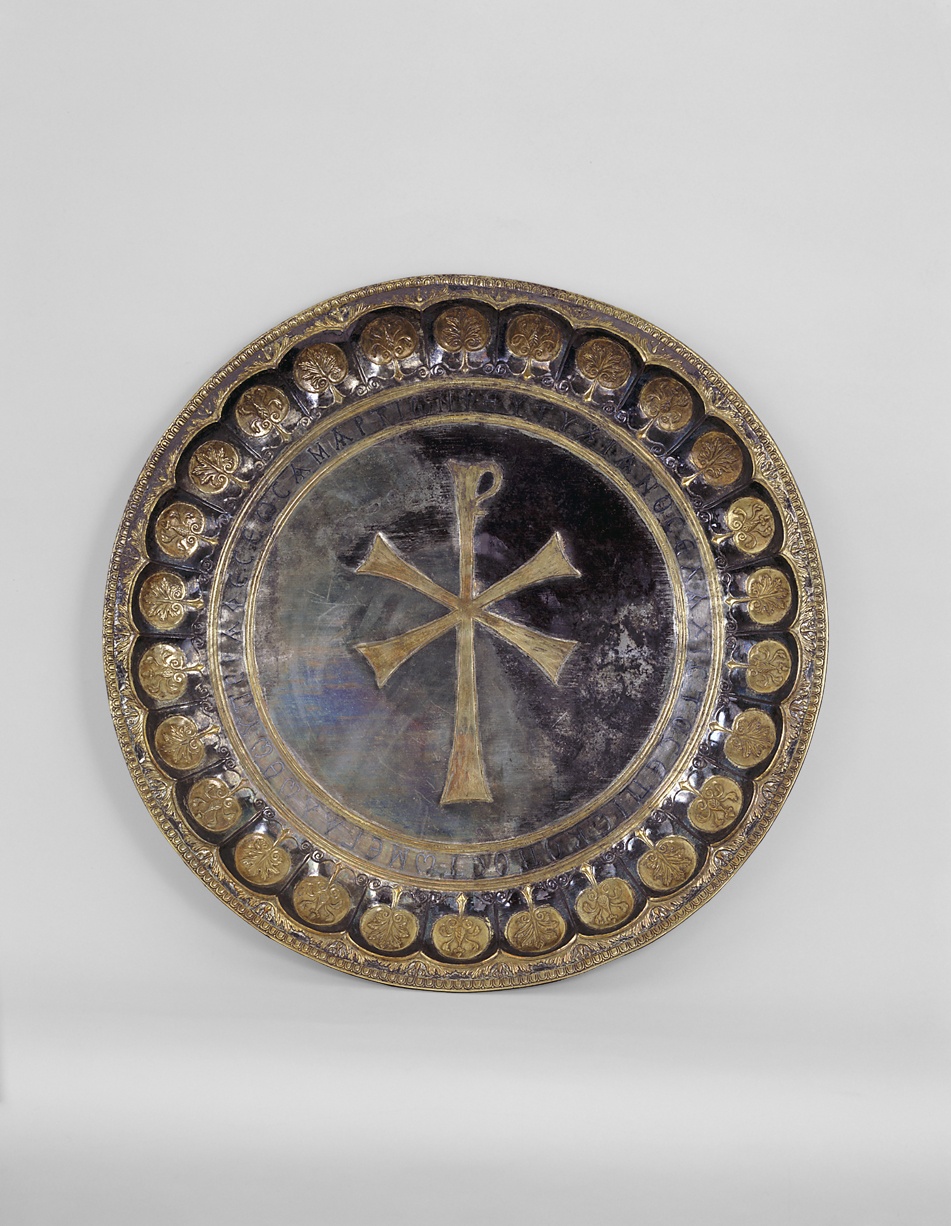 Shaped and hammered from a very thick sheet of silver and worked from both sides, front and back. Elaborate chiselling and chasing, the letters inlaid with niello first chased out, possibly with the help of special punches. Parts mercury-gilt. The whole very carefully burnished and polished. The foot-ring, a thick silver strip hammered into shape and soldered on the underside.

Condition: the present surface a variety of silvery hues of all shades owing to heavy limestone deposits and silver chlorides removed in cleaning [1]. The border somewhat distorted over two cusps above the Chrismon, parts of it still incrusted with silver chloride and left uncleaned as underlying surface is too fragile.

This paten is possibly part of a large hoard of silver objects, which includes several other very similar [2] patens among its varied contents, probably making up a significant portion of the ecclesiastical furnishing of one church [3]. Some of the objects bear inscriptions naming Holy Sion [4] indicating that the treasure may have belonged to the Holy Sion church at Korydalla (near Kumluca). It has been suggested that it was looted or buried during the Arab invasions of the 7th century [5].

In its centre a large gilded Chrismon is encircled by an inscription in niello between two bands:

"Eutychianos, most humble bishop, presents this to the Great God, for the forgiveness of his sins" [6]. On the outside an elaborate border is composed of twenty-six cusps with gilded medallions in repoussé rising to a flat rim with leaf motif and egg-and-dart moulding also in repoussé and gilt. There are no control stamps.

In view of the quality of the workmanship, much finer than that found on the numerous examples of Byzantine church silver discovered in Syria, this paten, though not necessarily made in Constantinople, may have been fashioned locally imitating an example from an imperial workshop .

Since publication of the Royal Academy catalogue January 1994, a major publication, The Dumbarton Oaks Symposium, was received later that year, which is a prime reference for this item and the following.

1 The calcareous incrustations by means of 10% formic acid, the silver chloride mechanically under microscope. The distorted section of the border with cracks and a small hole consolidated and filled with polyester resin (reversible process). The cleaned surfaces sealed with micro crystalline wax.

4 Inducing the unlikely suggestion that these furnishings belonged to the monastery founded by St. Nicholas of Sion in the mid-6th century in the mountains above Myra, some forty km from Korydalla (Hellenkemper, H.: loc. cit.).

5 It was off the coastal section that in 655 the Arabs inflicted a crushing defeat on the Byzantine navy commanded by the Emperor Constans II himself, who barely managed to escape (Boyd, S.: op. cit., p. 198 n. 3).