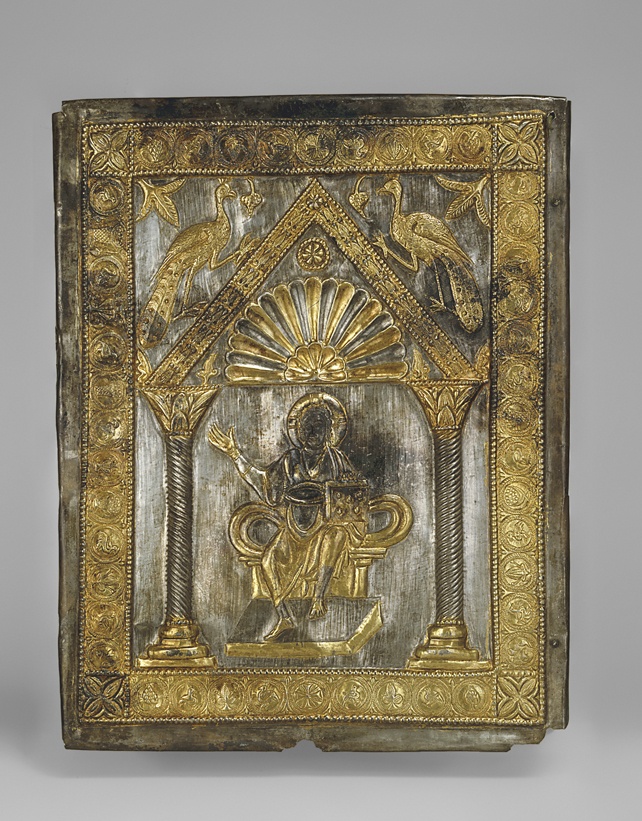 Hammered, repoussé, worked back and front from silver sheet with elaborate and carefully detailed chasing; parts mercury-gilt; the faces of the covers burnished and polished.

a: visible on the left are two flat-headed silver nails for holding the cover on its wooden backing. On the right edge four longitudinal slits that probably held leather straps for tying to others from the back cover.

b: visible on the right two nails with conical heads but still with their ends coiled to hold the wooden backing in place. On the top right hand corner a silver wire, a piece of wood still attached to it at the back, ends in a closed loop [1] Likewise on left edge as for a. four longitudinal slits.

A young beardless haloed Christ, his right hand upraised and his left holding a book which rests on his left knee, is seated on a throne within an aedicula. The latter is composed of two columns with spiral fluting that rise from elaborately moulded bases and are surmounted by foliate capitals that support a gabled roof. This is formed by a decorated band framing a shell motif with a second small shell in its centre, in the spandrels on either side are peacocks with vegetal and floral ornaments. The outer gilt border is decorated with birds, florals and crosses and the four corners are formed by squares with quatrefoils.

There are precedents for the position of the figure of Christ among which a drawing on parchment [3], copied from an original dated to the 4th century, shows Constantius II seated on a similar throne in almost identical pose and gesture, save that in his left hand he is holding the consul's staff. Some of the motifs [4] found on various of the book covers resemble known Byzantine illuminated manuscript pages, but whether they were inspired by the illuminated manuscripts or vice versa is open
to conjecture.

Though generally referred to as book covers, it is likely that some of these plaques were not, since there are three matching ones from the Sion Treasure [5], and others also have been referred to as plaques [6]. However, in the present case, their identical decoration shows us that they belonged together and there is no doubt as to their having been book covers for the same book, on account of the nails and the longitudinal slits placed in keeping with a front and back cover.

The closest parallel are the two incomplete panels showing three figures from the Sion Treasure [7] in Dumbarton Oaks, and the third related piece in Istanbul, almost identical for all the decorative elements save for the figures represented - here Christ enthroned, there Christ between two Apostles - and the variation in the motifs on the outer gilt border, though the four square corners are identical. They are surely from the same workshop and in all likelihood were made in Constantinople. Likewise two other plaques in Dumbarton Oaks showing a cross [8] and said to be also from the Sion Treasure probably come from a metropolitan atelier - possibly the same one. Related in various aspects are some of the other examples, usually said to have been found in Syria and probably made there, such as the plaques figuring St. Peter and St. Paul in the Metropolitan Museum [9]; these last a provincial production inspired by the art of Constantinople.

1 Possibly to enable attaching by a hook to the back cover.

2 The calcareous incrustations removed by means of 10 % formic acid. Fragments of outer frame glued, cracks and joins strengthened on the reverse with fine lens paper and polymethacrylate ester. The faces of the book covers sprayed with nitro cellulose lacquer. (Save for cleaning, all the processes are reversible.)

4 On the Rossano Gospels fol. 121r, generally ascribed to the second half of the 6th century, we have a parallel for the conch and the columns; on the Rabbula Gospels fol. 9v, completed in 586, we have a St. Matthew raising his right hand, his left holding a book on his knees, he is a reflection of the type for ancient philosophers and poets from which he derives; and there are birds figured above the cupola. For the seated figure of Christ and the setting in general a closer comparison, also from the Rabbula Gospels fol. 14r, is Christ Enthroned (Weitzmann, K.: Late Antique and Early Christian Book Illumination <New York, 1977>, pp. 96, 100, 104, pl. 33, 35, 37).