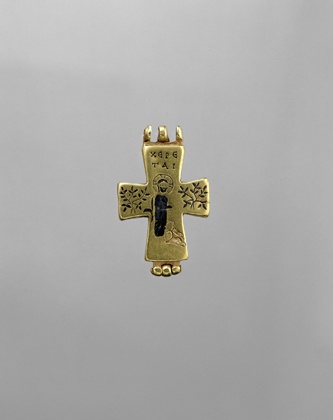 Composed of two halves. The back half holds a compartment with an openwork, thin gold sheet cut out to the shape of a patriarchal cross (with two horizontal bars), its sides held in place under pressure with the odd point of soldering; the compartment once held a relic, probably a splinter of the True Cross. Each half is hammered and cut to shape from a sheet of gold; some of the edges are turned up, while others are added strips of gold sheet, fusion-welded and burnished. The letters and the parts of the figures to be nielloed are cut out and chiselled.

On the front side, two closed gold loops are annealed on top and bottom, and on the back of the cross there are two loops at each end. When the two halves are closed, the loops fit together. The lower loops are held together by a hinge-pin, enabling the cross to open. The top loops would have been held together by a pin, probably with swivels, with an attachment for hanging from a necklace.

Condition: on the front side pieces of the niello inlay are missing: the body of Christ, some of his garments at his feet, and the bodies of the two soldiers at the foot of the cross. The inlay of the figure to the left of the cross is much damaged; the faces and the surface are worn, with the odd nick, dent, and scratch. On the other side, the inlays and surface are better preserved, although all the inlays of the two kneeling women are missing. The surface is slightly worn with some small scratches.

The Crucifixion, in conventional Middle Byzantine style, appears on the front of the cross. Christ is on the cross, flanked by the Virgin and St. John. At the foot of the cross two soldiers cast lots for Christ's clothes. The abbreviated inscription are Christ's word to the Virgin and his disciple: "Behold thy son!" and "Behold thy mother!" (John 19, 26-27).

The other side depicts Christ's appearance before Mary Magdalene and Mary, the mother of James and Joseph, following his resurrection (told in Matthew 28, 8-10). The two Marys first go to the tomb of Christ, where an angel tells them that Christ has risen: "And as they went to tell his disciples, behold, Jesus met them, saying, All hail. And they came and held him by the feet, and worshipped him." The scene is labelled with Christ's words, chairete, "All hail". The episode is not common in Byzantine art (only rarely on icons of feast cycles), but it does occur sometimes [1]. A closely related depiction appears already in the 6th century illuminated Syriac gospels now in Florence (the Rabbula Gospels) [2], where the scene is similarly set in a garden.

Several similar reliquary crosses with niello inlay survive, including a recently discovered example from Pliska, Bulgaria [3]. The finest related object is the so-called Fieschi-Morgan staurothek in New York, a reliquary box decorated with enamel and niello inlay [4]. Although this group of objects has generally been dated to the 7th or early 8th century A.D., Kartsonis has correctly seen that the style and iconography cannot be placed before the 9th century [5]. The Pliska cross and this example are unlikely to have been made before the 10th century A.D.

Exceptionally this entry has not been written by the author, but by Jeffrey Spier, a friend, at the latter's request and also because one of his chief specialties is the Byzantine period. The author supplied the technical data which J. Spier has taken over verbatim, expressing certain parts slightly differently.