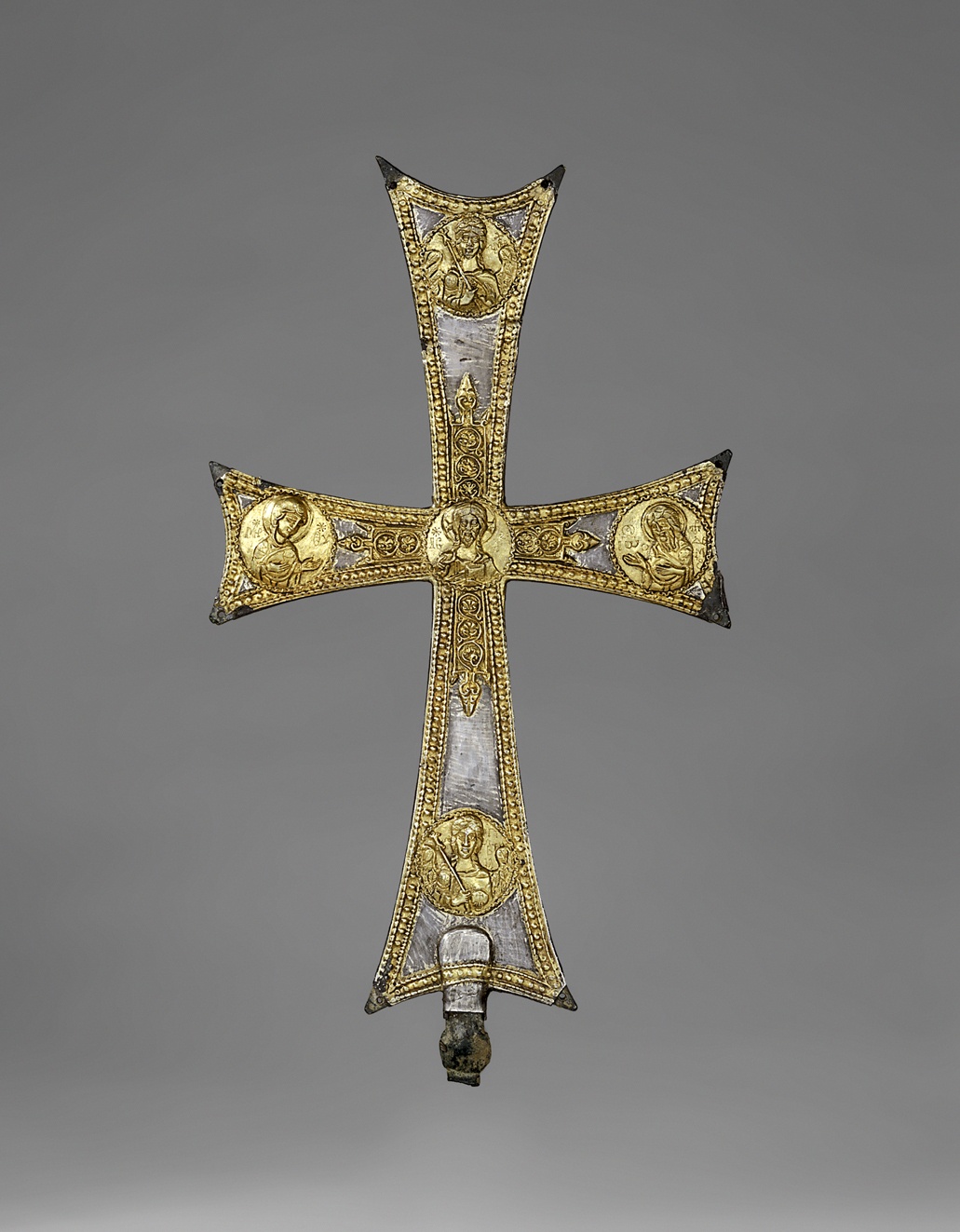 The iron armature carefully worked and shaped; each of the four arms of the cross end in two points, pierced with round holes for the rivets that held elements sheathed over them, all presently missing, composed of a cuff topped by a pointed ball. These decorative elements helped keep in place the silver sheet covering the front of the cross, which was elaborately and carefully worked front to back and back to front, repoussé and punched before being fixed on the armature with the help of solder. All the detailed elements and decoration gilt. On the back, the silver sheet folded over the edges of the cross extended some 2 mm under the front sheet, on it letters, tondi and figures were inlaid in niello with parts gilt.

Condition: six points of the sheet on the front of the cross torn and missing, the lower two were cut clean at the edge of the hole; little dents and slight damage to four of the relief busts on the tondi, the one of the Virgin unscathed. On the back sheet, the eight points were cut clean, a few have suffered minor damage. The front and the back of the cross with the odd nick. The top arm of the cross bent forward and the lower arm also, but very slightly. A bronze tang, now broken, juts out below the cross and would have been inserted in a long handle now missing.

The front side has gilded repoussé medallions and border decoration. In the centre the bust of Christ, on his right the Virgin and on his left John the Baptist. On the top of the cross is the Archangel Michael and at the bottom the Archangel Gabriel. The respective names are figured in each medallion with letters formed by punched dots.

The flat, borderless back has in its centre the standing figure of the Archangel Michael, his wings outspread and holding a spear in his right hand. On his right the Archangel Uriel and on his left the Archangel Raphael. On the top of the cross stands St. Paul in military garb and at the bottom the bust of St. Niketas. Their names or monograms are inlaid in niello.

This cross belongs to a group of fragments and crosses, most of which probably come from the same workshop: they are the three fragments in silver with niello, all three probably from the same cross, in Dumbarton Oaks [1]; the large cross in Cluny [2]; the top three arms of a cross in Cleveland [3]; the Matzkhvarichi cross [4] and the coarser Geneva cross [5].

This cross originally surmounted a long staff and would have been held in front of the faithful during religious ceremonies. The representation of St. Niketas, an uncommon saint, probably indicates that the cross belonged to a church dedicated to him.