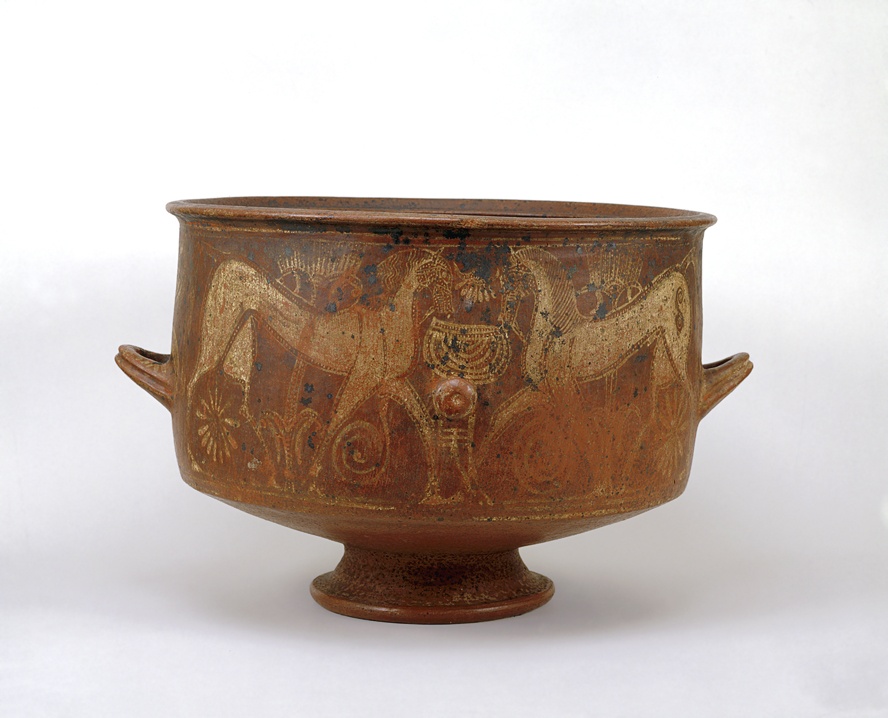 Clay body and hollow foot built up separately on the wheel and joined; two handles with deep central groove and two knobs hand-fashioned and attached; painted decoration then added.

Condition: lid and one knob missing, a crack to the foot. The reddish Caeretan terracotta has turned a darker and deeper hue; the painted decoration in white is much weathered and oxidized.

A scene illustrating two animals facing each other separated by the knob on each side between the handles. On one, two elaborately bridled horses lightly stepping, their muzzles over a cauldron (just above the knob) mounted on a tripod, the end of the halter coiled between their front paws. Rising from the ground beneath their bellies a plant appears to grow out of a lotus though it was probably thought of as behind it. The flowers above their backs may represent a palm tree and there is a stylized rosette between their hind legs, one with thirteen and the other with fourteen petals. One of the horses has a double spiral on its haunch.

Below and above each handle and passing through its loop, a luxuriant stylized plant, probably a palm tree, which may symbolize the Tree of Life.

On the other side, two striding lions separated by a bull protome on a powerful neck (as though rising out of the base of the knob, now missing), a garland-like decorative element above their backs and their long tails curling down to the ground between their hind paws. A large rosette with seventeen petals beneath the belly of one of the lions.

Three white lines run around the crater above and below framing the decorative scenes. Triangular hatching designs on the handles, the groove with traces of white.

The crater belongs to a particular Caeretan Orientalizing production of which there are four other examples from Caere, in the Louvre Museum, D 148-151 [1].

The painted scenes vary [2] though most have some plants; the horse is often represented; the decorative patterns differ slightly: composed of rectangles, hatchings, triangular motifs and such.

It is uncertain whether these craters were cinerary in purpose or employed for storing grain. They may have fulfilled one or several functions.

They have the same profiled mouth, D 149 and 150 have identical feet, and D 149 and 151 have identical grooved handles. Slight variations, in the same fashion that D 148 has three and D 151 four feet, that the handles of D 148 and 150 are flat, and the lids slightly different: a button on top of four grooved arched strips for D 149 and a plain button for D 150; maybe one of these lids does not belong. We feel that the more elaborate lid is more in harmony with the four-footed vessels and that the simple knobbed lid is appropriate to the type of the present crater.