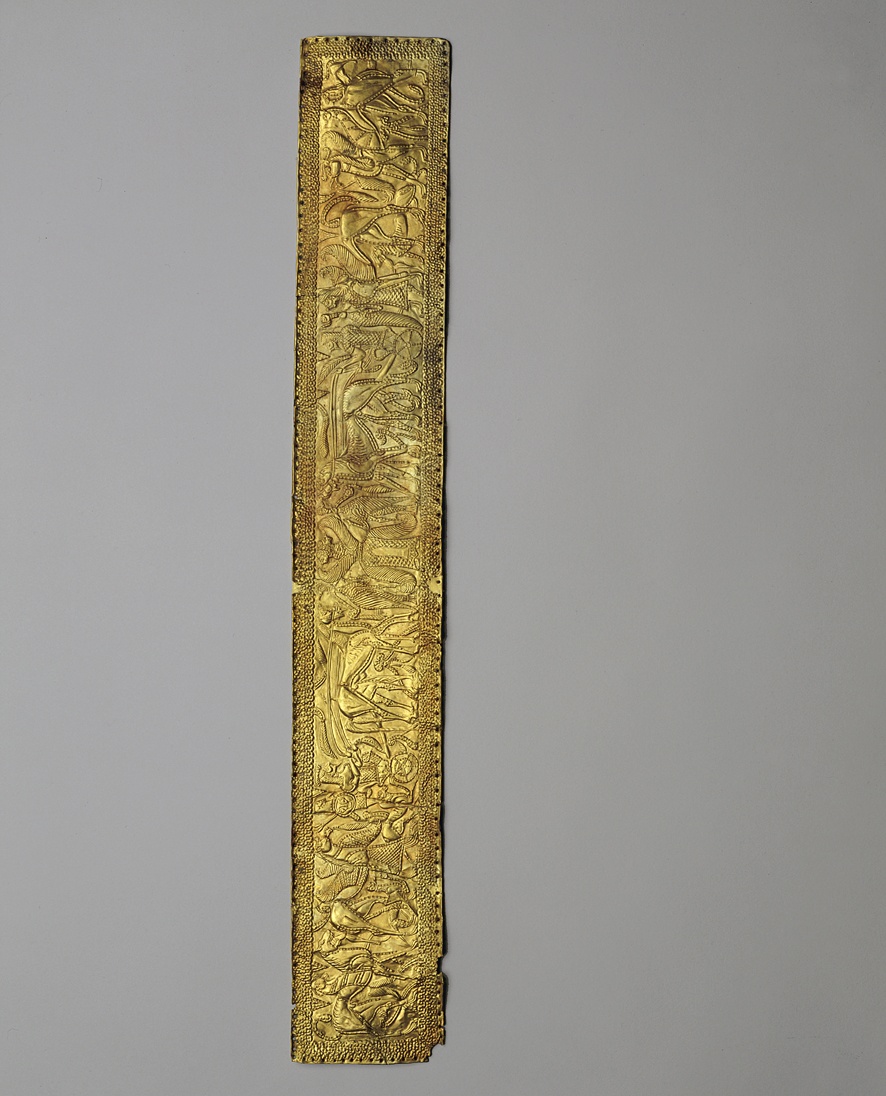 The band made of gold sheet hammered, repoussé, punched and chiselled. The outlines of the decoration lightly traced on the surface and the plaque worked back to front and front to back repeating the operation as often as required; details such as the triple spiral border incised. Originally backed by a sheet of hammered bronze of which fragments are still in place under the folded back edges of the gold; these cut off on the reverse of the relief at the holes that were closely punched in from the front between the spiral border and the edges. The surface carefully polished.

Condition: broken in four sections and restored [1], the parts joined to each other using small rectangular patches of gold, and three of the five very small fragments missing from the border and edges mended with plain gold sheet, after straightening out small parts slightly bent and reshaping a few little bits that were somewhat crushed.

A prestigious adornment of power, wealth and position, the low relief decoration exemplifies the eclecticism of the Etruscan spirit. The frieze is a product of their unbridled imagination, a juxtaposition of elements to embellish probably with no intention of conveying any specific message.

In the centre of the relief a double-headed Potnia Theron [2] holding a bird in each hand; on either side three groups composed of humans, real and mythical animals, lesser creatures of the animal world and plant life. The animals holding different elements in their mouths step lightly towards her.

The main decoration from the viewer's left to right is as follows: a lion-headed chimaera with a human leg dangling out of its six sharp- toothed jaw, preceded by a griffin-lion with a palm leaf hanging out of its mouth, behind a warrior in full armour about to mount a horse-drawn biga driven by a charioteer with whip in right hand. On the other side of the Potnia Theron a biga with charioteer, also with whip, is drawn by two lions, followed by a sphinx-headed lion holding in her right and only hand - a human one - a bird, a snake dangling from its beak. The bird is the same as those held by the goddess. To the far right a griffin-headed chimaera with lion body and two wings, one behind its head, the other coming down in front of its chest. From the chimaera's mouth hangs a wiggling snake.

Secondary elements are, on the ground, a bird and a running hound; on the right side of the plaque a feline or hound with a human leg hanging from its jaw; and on the upper right hand corner a smaller feline or hound.

Plant life is represented by single and double palm leaves, lotuses and half lotuses with a hanging leaf; from the top border six triangles point downwards.

The whole relief is framed by an intertwined triple knobbed band that spirals around knobbed cones.

Most of the contours are incised and the outlines of many of the animals and figures are composed of a raised ridge with embossed knobs between two parallel lines. Elements of dress, of the chariot, the breasts of the birds, the necks and busts
of the Potnia Theron are composed of small scale-shaped, lozenge or rectangular elements with central knob or ridge, their outlines incised.

The overall decorative effect is achieved using differently formed incisions and raised shapes. Several interesting details reveal the goldsmith's attempt at perspective: the three spearheads on the end of two spear shafts held by the fully armed warrior intimate a third shaft behind; his chariot, with its wheel frame and five spokes identical to the other chariot's, has here a smaller inner circle intimating the other wheel.

We know of no pertinent comparisons in gold but for the type of hammered metal band worked in a similar fashion and probably attached to furniture or to a xoanon (a figure usually in wood) a group of bronze strips in the Ny Carlsberg Glyptotek bear some relation [3]. For the technique there is similarity with the workmanship of two gold bracelets in Florence [4]. Various aspects of its style can be found among different surviving works of art such as the baroque universe of mythical animals as represented on the Tomba Campana in Veii [5]; there is a similarity to the mythical animals on a silver situla from the Tomba Regolini-Galassi at Cerveteri [6]; and in a simplified form mythological beasts appear on Faliscan pottery and engraved Bucchero vessels, e.g. the chimaera on the left end of the relief can be found in a far less sophisticated version on a Bucchero kyathos [7] in Rome.

We would like to thank Flemming Johansen for a lengthy preliminary listing of the decoration of the plaque and for communicating his date c. 600-590 B.C.

1 By Klaus Sommer. The adhesive used was cyanoacrylate. He also supplied a list of stylistic comparisons.

2 A representation that originated in the Near East and that harks back to pre-Hellenic times, associated with Pallas Athena and more especially Artemis. She is related to Cretan imagery with trees and serpents and to the Mycenaean Lady of Beasts and Palaces (a continuation of the Cretan protectress of the household). Here, being winged, a Near Eastern characteristic, and dressed in a long Ionian chiton, indicates that she is probably an Artemis. The birds and her association with the plant world illustrated here by flowers and palm leaves reinforce
this identification.