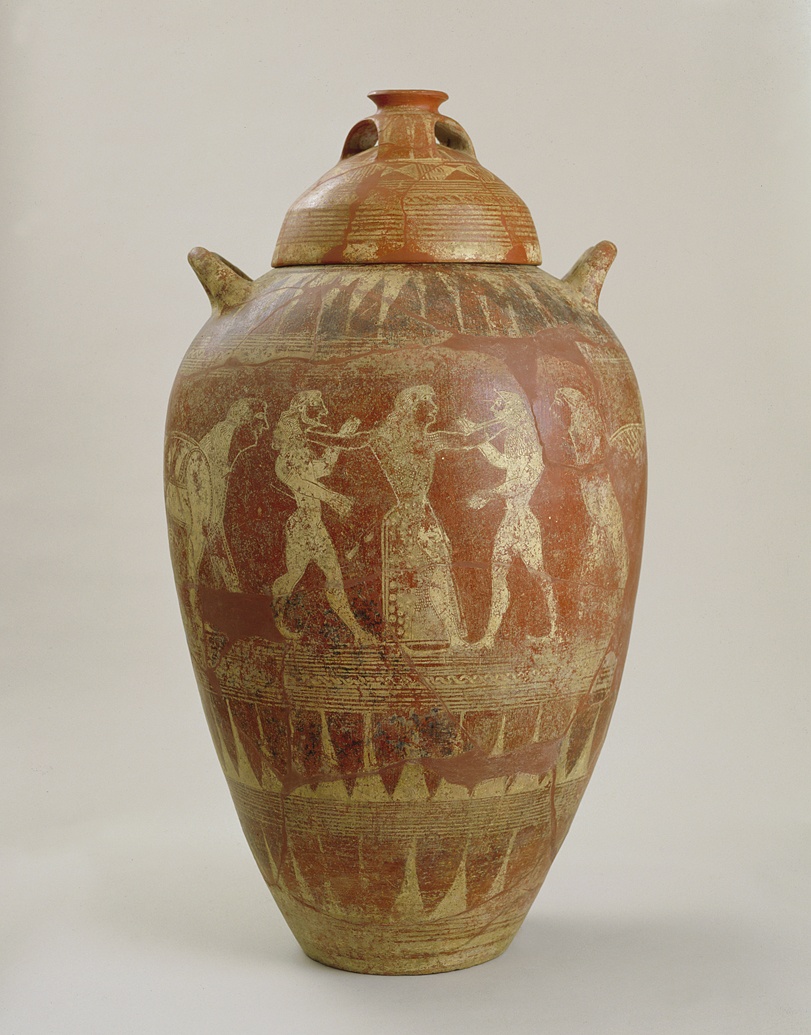 Made of typical reddish Caeretan clay. Body wheel-turned with double lug handles hand-fashioned and joined; the lid and its handle [1] also wheel-turned.

Condition: reassembled from several large pieces. Missing body and hind legs of the left sphinx, the right hind leg of the panther, most of its face and jaw, the left front paw of the right sphinx.

The lid restored from many pieces surely belongs [2] as the painted decoration reflects that of the vessel, though the terracotta is of slightly different colour.

The painted decoration in white slip is somewhat weathered and damaged.

Above the scene is a section of white concentric lines on red divided by a central row of gadroons, above which a band of white rays pointing downwards separated from the mouth by several wide concentric bands of white on red.

On one side of the pithos the main scene represents Helen or maybe a goddess greeting or separating two male figures approaching her, either her brothers, the Dioskouroi, or Theseus and Perithous. Two large winged sphinxes with long curled tails frame the group. The lesser scene on the other side is made up of a huge panther, just about to bite, unless already doing so, into the back of what seems to be an indetermined quadruped.

For comparison we have what appears to be a pair of twin pithoi with lids, almost identical in shape, without figurative scenes but with similar motifs, from the "Tomba dei doli" at Cerveteri [3] and a large somewhat restored Caeretan pithos with a figurative central band in the Hermitage Museum [4].

It is to be observed that if one places the lid upside down, its handle becomes a beautifully architectured foot for the slightly conical round bowl. We do not believe that this is accidental and may imagine that the Etruscans, with their practical approach, here adapted successfully the utilitarian to the beautiful. Thus the lid could have served to hold a measure of
the pithos's contents.

1 How the handle was made is problematic. It was either wheel-turned in two parts and then joined, wheel-turned in one piece, the rough parts underneath the arches clay added for reinforcement, but whether one or the other, the three arched sections were cut out; unless only the top part was wheel-turned and the arches built up by hand.

2 Though it is possible that there was a pair to this pithos, in which case it is not to be excluded that the lid belonged to it, e.g., the pithoi from the "Tomba dei doli" (see infra and footnote 3).