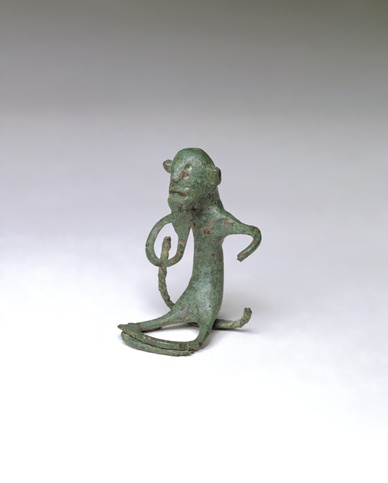 The wiry arms and legs bent into position after the hammering of hands and feet and chiselling of fingers and toes. The eyes drilled, a deep wide groove for the mouth.

The elliptical seat under the figure and the twisted rope rising on either side for suspension hammered in the cold.

A peg extending down from the coccyx transverses the seat through a drilled hole and is hammered underneath so as to broaden slightly forming a rivet head. The seat is thus held in place leaving the figure free to rotate slightly.

Condition: patina mottled green with traces of yellow and reddish brown metal coming through in places. Earth deposits on the rope.

Left hand missing, finger point on right hand and most of the twisted rope. Two important cracks through the right arm. A depression beneath the left eye where virulent cuprite has been removed in modern times.

He comes from a group that was made up originally of eight human figures and six animals fixed onto or suspended over a votive "chariot". It consisted of a disc of bronze with a central opening; three wide strips attached to it by rivets and extending down were each fixed onto the lower part of a human leg resting on an axle between two four-spoked wheels. A goat protome, horned and bearded, adorned the join of each strip to the leg. Six of the human figures and all the animals were fixed to the disc; the other two - of which this is one - were suspended from above [1].

The short history of this ensemble is as follows: discovered on 4 January 1800 on the steep hill below the castle of Lucera by Cavaliere Bonghi, it entered his collection and was first mentioned by E. Gerhard [2] and nine of the figures later reproduced by him [3]. W.M. Wylie acquired from Cavaliere Bonghi in Naples the ensemble still in his hands during the Winter 1865/66, shortly thereafter offering it to the Ashmolean Museum in Oxford where it still is [4]. In all likelihood, by then, the present figure as well as that of a wolf seizing a lamb in his jaws [5] were no longer in Bonghi's possession.

Comparable cult ensembles of the first half of the 1st millennium B.C., though rare, have been found unexpectedly here and there. The origin for such votive "chariots" goes back to the Near East as evidenced by examples from the second half of the 2nd millennium from Cyprus, whence the influence spread first to Sardinia and later to different regions of Italy.

The bronze amphora from the necropolis of Olmo Bello, Bisenzio [6] and the Capodimonte "chariot" (brazier on wheels) [7] are two comparisons very close in date and mood to the ensemble of which this figure was a part. An example that reveals the cross-currents that inter-influenced various peoples and their artistic output at the time.

For instance, he has a spiritual rapport with the Peloponnesian figurine, cat. no. 74, whose man-monkey ambiguity, though in essence representing a man, likewise combines "eroticism, fertility and regeneration" [8]. There is also a connection with the figurine from Central Etruria, cat. no. 184.

The influence may possibly have come from Northern Greece via the Ionian sea, up from the region of Laconian-influenced Tarentum and/or across by way of Cumae and Campania.

Padre Raffaele Garrucci has a most attractive explanation of the cult involved. Apparently, Lucera was famous in antiquity for its flocks of sheep and the superior quality of their fleece.

The group represents a pastoral scene with a wolf absconding with a lamb. Thus, there are various figures: naked without indication of sex - such as this one, girt and well-endowed, one blowing the murex, as well as two armed figures to ward off danger.

This ensemble of a sacred character is according to Garrucci an offering at a shrine of the god Faunus Lupercus. The festival of the Luperci consisted of sacrifices to the god to protect the flocks from wolves. Inherent also is another intent, that of rendering the flock fertile.

This figure and his pendant in the Ashmolean Museum with one hand over the mouth and the other covering the forepart of the body, a dual symbolism to conceal the organs of speech and sex, are in conformity with the most ancient Italic traditions.

The whole group is an illustration of the the old Italic festival of the Luperci.

2 Bulletin de l'Institut de Correspondance Archéologique,
Rome 1830, p. 15; the account of the discovery given by Cavaliere Bonghi, quoted by Gerhard.