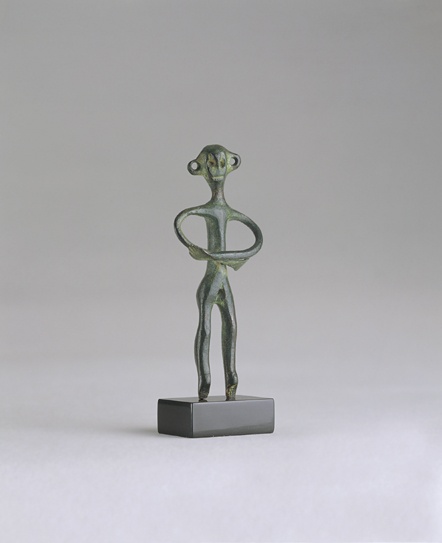 The wiry arms bent into position after the hammering of the hands and the engraving of the fingers. The eyes and ears drilled, the mouth grooved.

The sex is an enigma, for it would seem that it was first a longitudinal slot that was later drilled. Thus, originally, we probably had a female figurine that for some unknown reason was later made into a male by drilling the hole and probably inserting a penis.

A slight crack at the nape and the patina somewhat flaked around the neck which may explain partially the tilt of the head.

The thin, flattened tang under the right foot broken off.

Eyes missing if once inlaid, penis also if once inserted.

According to Mrs. Richardson "the nicest Geometric bronze I know" [1] and belonging to a group from Arezzo that were used as pendants for necklaces; they were also the earliest votives from Etruria. Later versions were made in the region of Picenum.

This figurine might have been a pendant or amulet hung by the ears or been dedicated as a votive and affixed to a base by the tangs.

Maybe they were made thus to fulfil both functions, as did some Northern Greek Geometric bronzes.