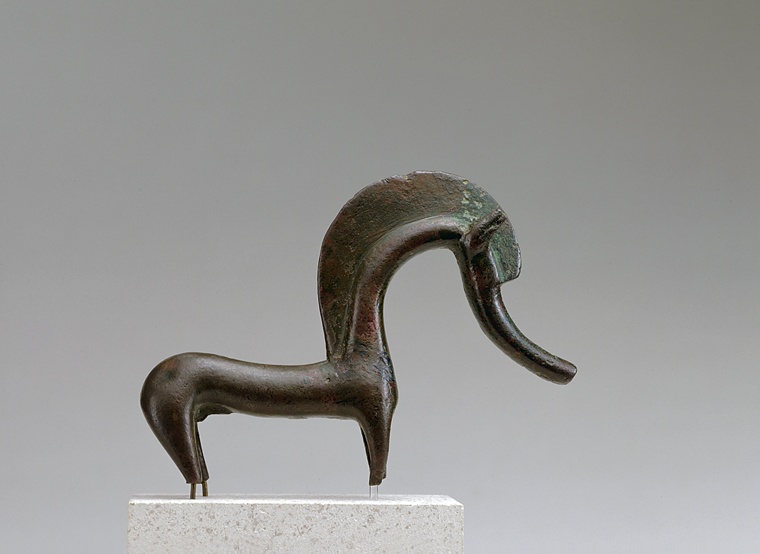 Solid-cast by the lost wax process, slightly cold-worked and burnished.

Tip of right ear broken, ends of legs missing, and tail once affixed to cavity created for this purpose.

A modern hole under the belly now filled with copper served to mount it.

This sculpture is an enigma - the one and only survival of its type that we are aware of.

The writer had related it in the past to Villanovan bronze horse bits of the 9th-7th centuries B.C. considering it to be a predecessor, and notwithstanding connections with the horses on bronze tripods from Etruria [1], its attribution poses a problem. Though the cylindrical way of representing the neck, the mane and most especially the ears with their median groove do bear strong resemblance to both the above. However, this horse exudes a plastically satisfying fullness, a purity of line and an extended flowing muzzle that are not to be found in the above-mentioned comparisons. Furthermore, he is both free-standing and in the round which partially explains the differences. He probably formed part of a cult-votive ensemble, maybe something like the bronze wagon from Strettweg [2] and could be dated anywhere between the "Urnenfelderzeit" and Early Hallstatt, i.e. 1200-700 B.C.

A survival of this figural type can be seen in the bronze horse protomes that are part of the handles of a bronze urn from Chiusi, in Berlin [3], dated in the second half of the 7th century B.C. This horse was used by "Bogey" Harris as the pommel of his walking-stick for some thirty-five years.