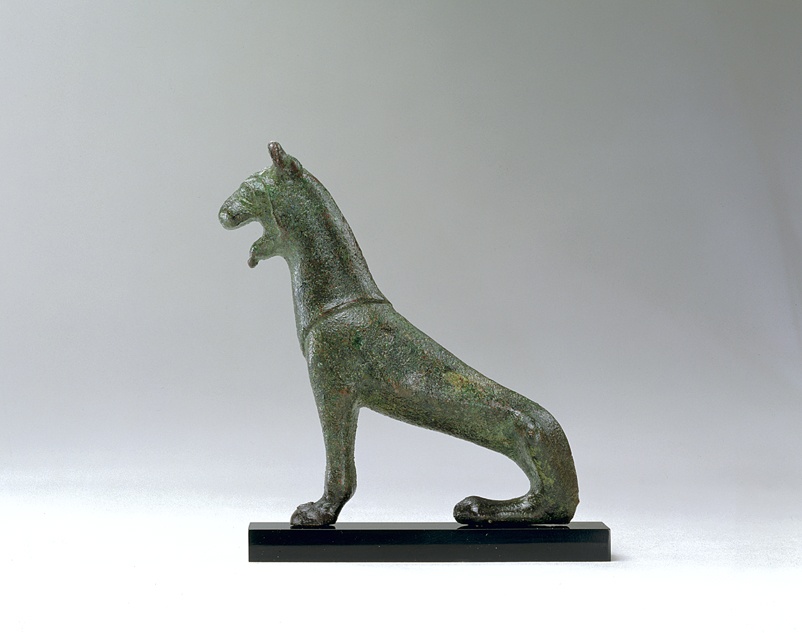 Solid-cast by the lost wax process, chiselled in the cold and burnished.

Condition: original smooth surface covered with a grainy patina of varying shades of green with spots of reddish cuprite, smudges of malachite green, the whole covered with a cellulose lacquer.

Slight cavity in the tip of the tongue and tail missing.

To enable mounting, the front paws filed down on the underside, a modern peg inserted from above as a rivet and a peg affixed under the back paws - the Etruscans would have used a lead or tin solder.

This lion has a pendant , likewise formerly in the Simkhovitch collection; they both remind us of the famous marble lions on Delos to which they are very close in spirit, both in manner and stance.

The Greek influence is obviously visible and probably harks back to a Cycladic type.

By general feel and in particular, on account of the shape and outline of the eye, we see a rapport with the oinochoe handle from Perugia and with another lion of unknown provenance but from the same ambiance, both now in Munich.

Rather than attached to a crater , we feel that they are more likely to have been affixed to a four-wheeled brazier and have been four in number, unless coupled with a different pair - which would be somewhat unusual.