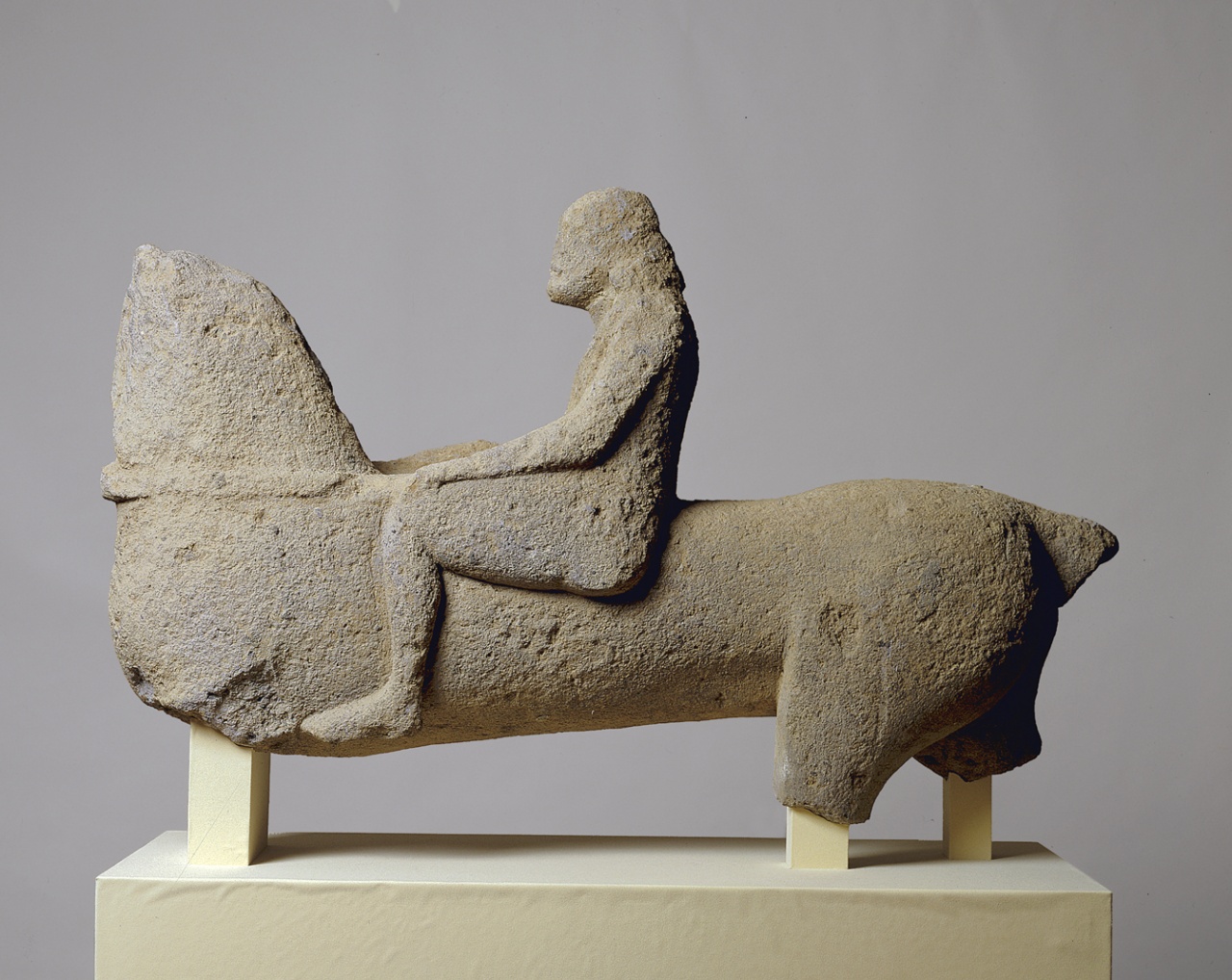 Sculpted in a somewhat blocked-out fashion from nenfro [1].

Condition: missing is the entire front of the horse's head, both front legs and a section of his lower chest on the right, most of his back legs and almost all of the tail.

The horseman's head and face are unfortunately sadly disfigured, his lower right leg and foot damaged.

The whole surface is much weathered, pitted and abraded in part owing to the nature of the volcanic stone which is somewhat crumbly and incapable of receiving a fine finish [2] .

The horseman belongs to a group of funerary sculptures made to be placed at the entrance to tombs. Most of the surviving examples are lions, winged lions, sphinxes, etc. Less usual are a figure riding a sea monster and a centaur in Rome [3] and a helmeted horseman on a short mount in Copenhagen [4].

Sculpturally, he bears a certain affinity with the above-mentioned centaur, as to the general volume of the horse's body, rump and thighs and a particular, the fronts of the upper hind legs that are rather flattish. His sex, only visible from the right, is indicated by a single round shape whence protrudes a tubular penis with tip missing. However, the present horse differs both from the Copenhagen mount and the Villa Giulia centaur by his abnormally elongated body. Notwithstanding this difference, we think that in all likelihood they come from the same Vulcian workshop.

The horse's mane, still visible on the right, was possibly braided on top.

Observe how the horseman, naked, his hair falling down his nape and shoulders, is added to his mount as though placed on top and not forming one with the animal. His forearms rest on his thighs and his hands on his knees hold a thick halter looped around the horse's neck [5]. Odd is the manner in which his buttocks hang like bags on either side of the horse's flank.

By reference to the dates usually ascribed to various sculptures from Vulci, such as the head of a sphinx in Berlin6, the centaur and the man on a sea monster in the Villa Giulia7, we place the horse and rider towards the middle of the 6th century B.C. An added indication for the date is an absence of sophistication and the manner in which the horseman is put on - but is not at one with - his mount.

There is also the sculptural peculiarity of the buttocks - clinging to the horse's back - as the sculptor has not yet mastered either perspective or how to realistically portray a seated rider on his mount.

1 Nenfro is the local stone of Vulci, a friable grey tuff. Tuff, from the latin tofus or tufus, is a porous stone - a by-product of lava formed from volcanic ashes.

5 See for other examples the two drawings: Hus, A.: op. cit., nos. VI, VII, pl. VIII, nenfro sculptures found 1828-29 in the excavations of the Prince of Canino at Vulci, presently lost
and tentatively dated by Hus in the second half of the 6th
century B.C.