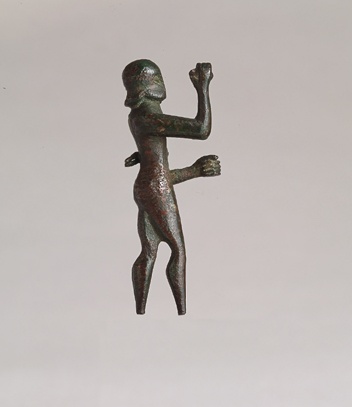 Condition: patina dark green with red oxides; abraded in parts to a medal colour bronze and with yellowish brown earth deposits. Both feet and the spears missing, small section of the shafts of four under his left arm.

The attribution of this statuette poses an enigma.

Firstly, as to the representation itself.

The naked figure wearing a Corinthian type helmet (nick [1] on the right border, though not figured on the left, is an indication that helps ascribe the helmet to the second development phase, a type found from Populonia to Taranto).

In his raised right hand he once held a spear and under his left arm were wedged four spears or javelins.

John Boardman reminds me that an akontistes [2] is an unarmed spear-thrower and therefore ought not to be wearing a helmet; on the other hand, he adds, if he is a hoplite, he ought to be holding a shield [3] and might be expected to wear more armour.

It may be that in Etruria and South Italy we meet with a certain poetic license in the representation of Greek subjects or prototypes, in the way that Greek myths were sometimes misinterpreted.

We know of two figures that are definitely from the same workshop: one in the Vatican [4], slightly shorter but stockier, though uncannily similar to our figure in every other aspect.The other in Buffalo [5], c. 11 cm high, complete with a magnificent swan-crest on the helmet [6]. Removing the crest and the feet, the figure is, again, uncannily similar to ours, even as to size. Unfortunately, the provenance of the Buffalo akontistes is uncertain; acquired on the New York market with Etruria as the indicated provenance.

But our akontistes might owe his unusual helmeted nakedness to a Greek background. Although the provenance of two of the figures is Italy (which in all likelihood is that of ours also), their helmets are Corinthian and the outline technique of their figures is reminiscent of the Laconian lead cut-outs from the sanctuary of Artemis Orthia [7].

Thus, these statuettes, probably the product of an Etruscan workshop, would represent naked hoplites, the explanation of their lack of armour being the problem. Snodgrass [8] tells us that the bronze panoply of a hoplite is not adopted universally, e.g. bronze figurines with Corinthian helmets may have no body armour; he further indicates that in Etruscan art they are depicted sometimes in slightly idiosyncratic form and in representations that are unorthodox as to their weapons or somewhat deficient in their armour. We have called our figure an akontistes, a javelin-thrower; but it is to be noted that the light-armed soldiers of Greece wore no body armour either.

The centre that made them might be in the area of Campania, bearing in mind the Etruscan presence there.

2 Is an akontistes a light-armed hoplite? As such would he only have one spear, a jabbing spear. If an akontistes is not a light-armed hoplite, then is he a javelin-thrower and thus may carry a bunch of javelins under his left arm. Under the left arm of the Buffalo figure there is a round hole and in all likelihood a similar hole was prepared in this and the Vatican example, now filled with the remains of a bunch of spears, javelins or stakes, probably four here, two or more in the case of the Vatican piece, and surely several under the arm of the Buffalo example.

3 There would appear to be no trace of where a shield would have been fixed on the left arm and the left clenched fist certainly never held anything. The same remarks apply to the Vatican (footnote 4) and Buffalo (footnote 5) examples which, as far as we can see from the photographs, have no traces of a shield on the left arm.

6 The helmets of our figure and of the Vatican example were never surmounted by crests.