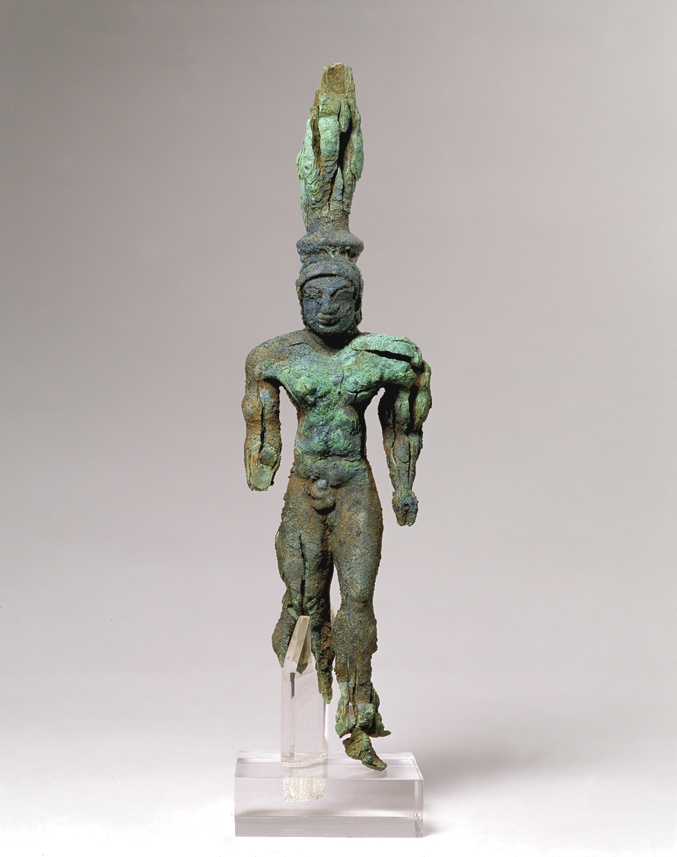 Solid-cast by the lost wax process with a certain amount of careful chasing in the cold - still visible on the head - before burnishing.

Condition: the volumes save for the head, back, right shoulder and upper arm, buttocks and left leg deformed by radical changes in the original bronze due to bloating and splitting with deep fissures and some of the surface shaly on account of virulent chemical and physiological change induced by water and electro-chemical elements in its burial context - the whole presently stabilized.

Patina: the surface disfigured and granular, a pale blue-bright green and azurite appearing as though sprinkled with a reddish, rust-coloured to beige earth. A purplish-red in a few spots where chipped and split.

Imbued with Ionian sensuality, the figure glorifies in his youthful assuredness. A vestige of what was once a masterpiece of Late Archaic Vulcian sculpture representing in the full bloom of youth a kouros, his left foot slightly forward; the central element of the shaft of an incense-burner [1].

Incense-burners [2] usually consisted of a statuette standing on an intermediary element (sometimes absent) which rested on a three-footed support [3].

Above the figure's head rises the shaft which was generally decorated with a variety of circular mouldings, sometimes embellished with inverted bowls in openwork or adorned with vegetable motifs. On top an open stylized lotus flower [4] to which would have been affixed a small bowl.

Here, it seems that the stem of the lotus flower rose up directly out of the moulded element above his head creating a compact whole.

A product of the School of Vulci and of a type much in favour - typically Vulcian are his very broad shoulders and the way his hair is folded up behind in a sort of bun held in place by a hairband [5].

1 The statuette's possible function as a lamp support should not be totally excluded, though highly unlikely.

2 What follows describes the general type, though there are variants - tall examples - with as many as one to three figures forming part of the shaft above the statuette (Giglioli, G.Q.: Arte Etrusca [Milan, 1935], pl. CCXVII nos. 3, Berlin, Antiquarium, 5, Munich, Antikenmuseum).

3 There are exceptions such as a chariot-stand for a thymiaterion, Louvre, De Ridder 3143.

4 Sometimes absent, as for instance on the thymiaterion in the Louvre, see preceding footnote, and Copenhagen, Ny Carlsberg Glyptotek (Giglioli, op. cit., pl. CCXII no. 2) - both with barely
any shaft.