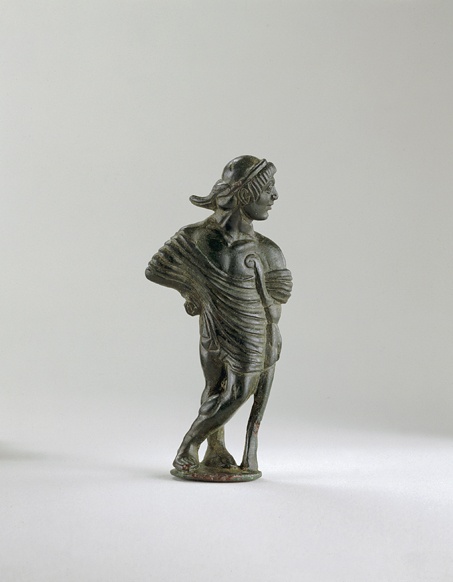 195. Shepherd Leaning on a Stick

Bronze
H: 8.3 cm
Provenance: no indication
School of Vulci
Towards the middle of the 5th century B.C.

Solid-cast by the lost wax process with considerable chasing in the cold prior to burnishing.

Condition: smooth dark green patina with traces of brown earth deposit; a nick to the tip of his nose, the lower part of the staff and the rim of his circular base, revealing a reddish metal.

This youth was the prime decorative element, the finial that adorned the top of a candelabrum.

The candelabrum would have been composed of a tripod surmounted by a long vertical shaft to which, near its upper extremity, was affixed a branch-like element with four spikes [1] crowned by our statuette.

It has been suggested that this figure could represent Paris or Herakles [2], since the Etruscans were much influenced by the Greeks and were wont to represent figures of Greek mythology, though often misinterpreted or misunderstood.

Nevertheless we feel that he is simply a shepherd boy leaning on his crook which has taken the curious shape of a crutch.

We have ascribed our bronze to Vulci though no traces of a workshop have ever been found there [3], but then again, traces of bronzeworks are rarely discovered. The archaeological site of Vulci is huge, both badly and incompletely excavated in the old days with considerable areas remaining to be dug.

A great quantity of very fine bronzes, adorning utensils of all sorts, have been ascribed to Vulci and reveal certain common traits.

Our statuette is unique and though defying precise comparison, conforms in being a candelabrum finial and illustrates certain characteristics that are found on several bronzes ascribed by the best scholars to Vulci [4].

the volutes of his crook, the large number of the folds of his chlamys with their fluid lines, his wavy hair tucked up in a bun flowing back in strands indicated by deep incised parallel lines -
also his very broad shoulders, his crossed legs with the bulging calves and the emphasis on muscles visible on the dorsals, the plasticity of his cheekbones - these last all recall a slightly earlier Vulcian bronze which is also a candelabrum finial [5].

There is not much evidence of Greek influence on our shepherd with the exception of his hair-style, which is obviously inspired by those illustrated on imported Greek pots, and what we perceive as a somewhat Ionian feeling.

However, he further fits in with characteristics [6] commonly ascribed to Vulcian output - a sense of ornate decoration, a harmony that enchants the eye and keeps it glued on the statuette which, in our case though fairly flat, is three-dimensional and fully satisfying in the round.

Whether the output to which he belongs is strictly Vulcian, as we think, or is part of a broader Central Etruscan style encompassing Tarquinia and Orvieto, is still debatable; but in any case, Vulci would seem to us to be the appropriate heading for such a regional production.

For a related piece or two, we may cite:

a youth in a very similar position though his head faces forward, in Boston [7], described as Greek provincial and which though strongly influenced by Greek art is, we feel, definitely Etruscan - made in Campania, Etruria or possibly in the ambience of our bronze. His function as a candelabrum finial is more in keeping with Etruscan custom and above all his broad shoulders are most un-Greek; from a similar workshop to our statue comes another candelabrum finial, a statuette of Turms (Hermes) in the Louvre [8] from Vulci.

In any case, he exudes a purely Etruscan ethos with his perky and delightfully humorous face, as relaxedly he watches over his flock on the enchanting Tuscan countryside.

1 Each spike jutting out radially at right angle from the next, composed of a three-pronged element of which the central point is longer to enable the candle to be affixed on its end. For an illustration of this, we have a wall-painting: Golini tomb II in Orvieto (del Chiaro, M.: Re-exhumed Etruscan bronzes [Santa Barbara, 1981], p. 23 fig. B).