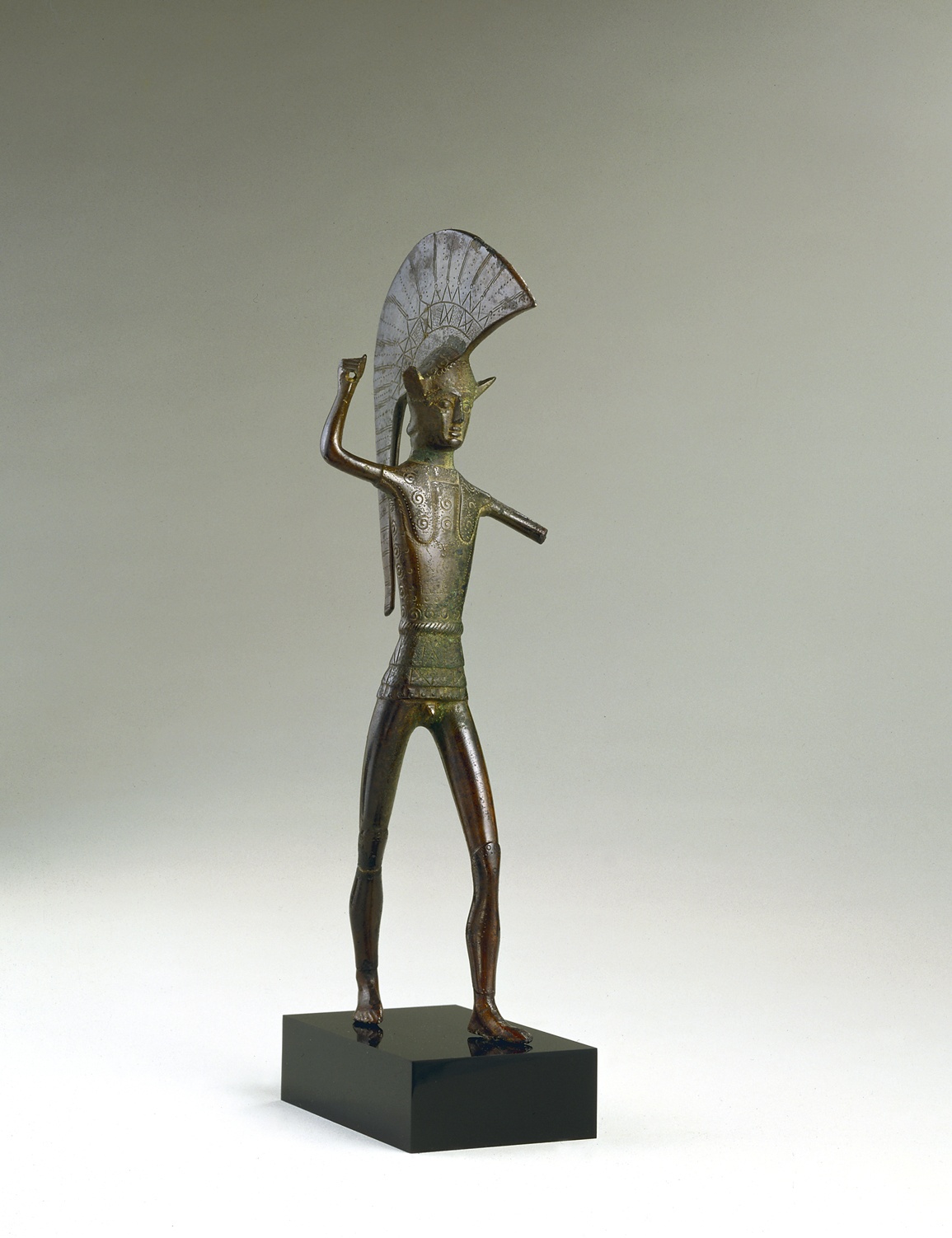 Solid-cast by the lost wax process and then cold-worked: filed, chiselled, punched, engraved and burnished.

Condition: patina a green-black underneath, the overall appearance a reddish-brown to brownish-brown and light greenish-brown with light green in places; the bronze in part with green incrustation and with traces of blue on the bust.

The upraised right arm slightly bent, the left arm missing from slightly above the elbow, the right leg broken below the knee and reattached. Tip of tangs broken and missing, also missing his spear and shield.

A votive, he is represented striding and in full armour - his upraised right hand once held a spear and a shield covered his left forearm. On his head a helmet, cheekpieces upturned, surmounted by an ornate horsehair crest. He is clad in a leather cuirass with front shoulder flaps and a belt, a short skirt of lappets over a pleated tunic, his legs protected by greaves. His armour and dress are richly decorated with the most elaborate designs.

The type is clearly influenced by the Etruscans whose representations are in turn marked by Greek hoplites as represented on early 5th century pottery.

This warrior probably belongs to Colonna's "Todi" group [2]. We see a very close comparison with two statuettes from it: the one in Rhode Island [3] of almost identical size, ascribed by Colonna to his Master A [4], and the example in the Bibliothèque Nationale [5], only three-quarters of the size of ours, attributed by him to his Master C. Colonna says of the latter that it is very close to his "Todi" examples, differs by its more classical face [6], ascribes it to his Master C, but still belongs to the "Todi" sphere.

It should be noted that both our warrior, the Bibliothèque Nationale and the Rhode Island examples have short necks whereas some of Colonna's "Todi" group, Masters A, B and C have long or longer necks. Also some of his Masters A and B have drooping upper eyelids whereas neither the present example, nor the Rhode Island, nor the Bibliothèque Nationale ones do.

The role of the master in relation to the workshop has not really been considered. Was there one master-artist to a workshop with different hands, or could, though less likely, more than one master share the same workshop?

Within our present state of knowledge, certain of the striking details mentioned above surely reveal either different workshops or hands; but then again, to what extent is the time factor responsible for such changes?

Since the elaborate engraved designs are a general feature found on almost all related examples to a greater or lesser extent but varying in the quality of execution [7], their slight differences probably do not denote a different master or workshop. But taken in conjunction with striking details they may eventually help us to attribute with greater precision.

We are inclined to think that the three parallel examples under discussion here are from the same workshop [8].

This warrior is surely from a workshop in the vicinity of Central Etruria and is unquestionably Umbrian from a region that includes the towns of Perugia, Todi, Calvi and extends as far east as Ancarano.

To date more precisely than the 5th century is difficult, though we feel he has a good chance of being towards the middle of the century.

1 Not included in the auction catalogues vols. I-III, Berlin 1917 (Paul Cassirer), as kept in the family.

8 The examples assigned to the Todi group by Colonna have been called a workshop and added to by Q. Maule: Etrusco-Italian Bronzes: The Todi Workshop, StEtr vol. LVIII-MCMXCII-(Serie III), 1993, pp. 75-88, pl. XIII-XXII.