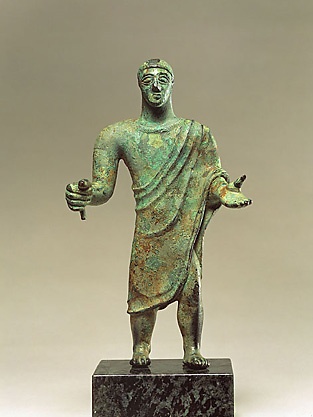 Solid-cast by the lost wax process, stamped, chased and burnished in the cold.

Condition: patina shades of light to dark green with incrustations of brown earth. The surface abraded over the front top of the head, the end of the nose, the right thumb, a whole layer missing around the left thumb.

There is a pit, a casting fault, on his left upper arm at the shoulder.

Missing most of the element he would have been holding in his clenched right fist.

His hair-style is composed of imprecise zigzag-like locks starting at the crown. The head surmounts a large thick neck. He has huge fleshy hands, the fingers well grooved, and short stocky feet with the toes chisel-marked.

He is wearing a tunic and a short toga, a sort of semi-circular cloak, which ends in a triple tassel just above the small of his back. The tunic's wide neckline is bordered with a herring-bone pattern which extends on either side over the shoulder-line to the edge of the sleeve decorated with short strokes.

The figure poses a problem as neither the author nor anyone else seems to know to what school and date he belongs.

Capt. Spencer-Churchill had given Sparta as a provenance [1]. The "fr. Sparta" has us puzzled. The writer had first thought that he bore a vague resemblance to Byzantine Pro-consuls of around the 6th century A.D. and might be a provincial statuette of this period from the Peloponnese.

However, notwithstanding his impressive presence and monumental stature, which is also reminiscent of the bronze colossus of Barletta [2], he exudes a coarseness and curious proportions such as the huge right shoulder - as though an afterthought suddenly added on.

Obviously, he belongs somewhere and relates to something.

The writer feels, despite the lack of a close comparison, that he is a local Italic product, somewhat related, though later in time, to the votive bronzes grouped under "umbro sabellici" [3],
from a region that must cover the Picenum territory in Central-Eastern Italy.

His stance seems to indicate an offerer. There are no visible traces of his having held anything on his open left palm and the remains of the rod that projects from below the right hand in an elliptical, slightly tapering tube, is square on the upper end next to the thumb, giving no indication as to what is involved.

1 Capt. Spencer-Churchill had a small black note-book in which he had been wont to enter over the years his acquisitions for his collection of "B.C's" as he called his antiquities. The entry reads: "a well-patinated (brown and green) bronze figure of a cloaked man, 5 5/8" h., complete except for broken staff in right hand, left hand open. Fr. Sparta, about 600 B.C. Lambessis £75, May 2 1931". This does not help us for Lambessis was a well-known Greek dealer of Greek antiquities in the early part of this century.