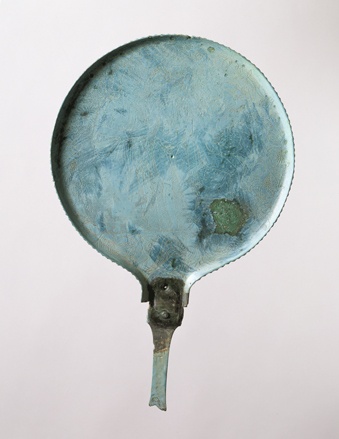 Cast by the lost wax process, very carefully and elaborately engraved with a chisel, etc. and then burnished.

Condition: broken slightly below the disc at the section which carried on into the tang, which would have been inserted in an ivory or bone handle now missing.

In view of the high quality of the mirror itself, an "elaborately turned ivory handle" [2] is more likely than a handle of bone, though sometimes the handles were not turned but were engraved in low relief with a figure [3].

At present, the piece with the tang broken in antiquity has been reaffixed in its original position [4]. However, at the time of the break a rough restoration had been carried out by simply taking the broken metal element, turning it back to front and riveting [5] it onto the mirror.

Patina: light, shiny bluish-green on both back and front with, on its decorated surface, a slight patch of copper-coloured metal showing through and adjoining a large patch of rough incrustation.

The scene illustrates a moment of a legend [6] in which Herakles visits Troy during his expedition against the Amazons and in a meeting with King Laomedon is promised the latter's divine horses should he free the city of the ketos, a marine monster sent by Poseidon and to which the King's daughter, Hesione, is to be offered as prey.

Going from the viewer's left to right we observe helmeted Lamtu (Laomedon) shaking hands with Hercle (Herakles) to seal the agreement. On Hercle's left we have Vilia (Princess of the House of Troy-Ilion, i.e. Hesione) held on the knees of Echpa (Hecuba), her mother whose right hand is extended in a gesture of supplication. Beneath the scene the terrifying sea-monster ketos like a modern-day "Jaws" [7]!

There are anomalies in the inscriptions of the names, testifying to the imprecision with which the Etruscans were wont to illustrate and interpret Greek legends. In the present, these are particularly interesting as they reveal hitherto unattested forms.

The dating of the mirror to the last quarter of the 4th century is fairly secure, based on its style and its various components.

The school responsible for its production is less easy to define. It could have been the product of an Orvietan, Perugian or Chiusine workshop.

Though Chiusi was the largest centre for the production of mirrors in this period, of which the incised figures were characterized by slimness and height - notwithstanding a certain fluidity in the representation of Vilia, we agree with Ines Jucker that the present example bears close resemblance with the Lamtun mirror from Perugia [8]. In addition, since three of the four documents relating to the adventure of Hesione come from there, we would likewise incline to attribute the above piece to Perugia.

1 The total height with the sculpted or turned handle would probably have been in the region of 31-34 cm.

4 By means of a vetro-fibre textile glued with araldite apoxy after impregnation of the original surface with paraloid B 72 to preserve the patina. The above operations responsible for the vertical rectangular patch. The restoration is reversible - the paraloid B 72 removable with the help of acetone or toluene.

5 This can be seen in Jucker, I.: op. cit., p. 129 ill. 3, col. pl. 24, pl. 26,1 and is still visible presently on the back of the mirror with the engraved scene - see the hole and the pin of the rivet that fitted into it - on its front by the large flattened rivet head
and traces above it where the pin almost came through from the other side.