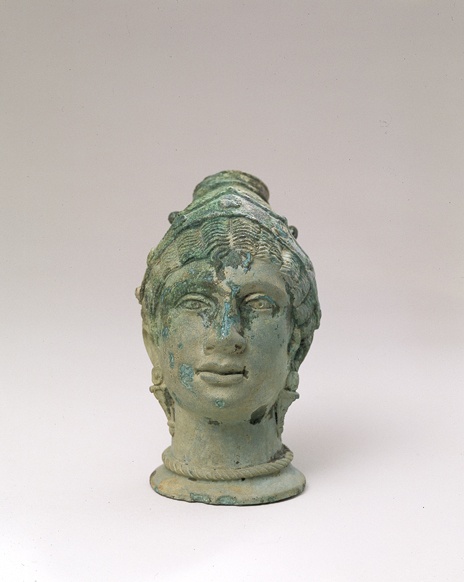 Hollow-cast by the lost wax process with extensive and very careful cold-working. The two loops for suspension hammered rods folded over and inserted through holes, their strands opened inside the vessel to hold in place.

Condition: the stopper or lid, which would have been on the bun at the top back of the head and cast by the lost wax process, now missing, as also the hammered sheet bottom of the vessel that was affixed by soldering. Also missing the chain for suspension, of which part of one link, a section of wire, still in place through the right loop.

Patina a light bluish green chipped [1] here and there especially along the ridge of the nose and lower right cheek.

Such vessels in the shape of heads have been thought to represent Turan [2] (Aphrodite) or Lasa [3].

A lady's toilet article, they were probably used for scented substances, but also fulfilled a funerary function and accompanied the deceased to her tomb.

Unfortunately, they are difficult to date and on the present example different characteristics such as the melon hair-style, the ear-rings with small discs and pyramidal pendants, her diadem, etc. are not of much help. The hair-style started in the 4th lasting for several centuries and the jewellery is really too imprecise, though her ear-rings were in fashion in the 3rd century B.C. Likewise attribution to a particular workshop is problematic.

These vessels, usually fairly stereotyped, have a somewhat boring expression in keeping with a mass-produced output - the present example is unusual in its refinement and with its imperceptible evanescent smile is truly a delightful expression of feminity in Etruria.

1 1 Most of the melon-coiffure as well as the right eye was incrusted with hardened earth deposits which were, where still visible in a few places, like mud patches on a dried out lake bottom; a recent cleaning has removed most of these; unfortunately a previous owner's attempt at removing them led to the loss of the original bronze surface which the passage of time had rendered less hard. It is almost like a crust of which the underlying bronze has become - owing to chemical mutation - somewhat crumbly, as is sometimes wont to happen with Etruscan bronzes. This particularity is frequently encountered on statuettes from Falterona on which the underlying metal is even more friable having often deteriorated to a powdery texture, a pale white or green cuprous chloride.