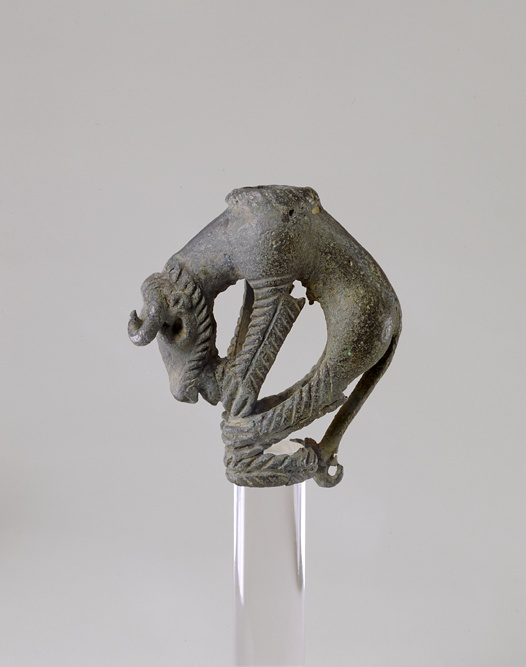 Made by the lost wax method and coarsely chiselled in the cold. Eyes hollow possibly for inlaying.

Condition: the original smooth skin of the surface eroded, the colour a greyish green with traces of earth deposit. A small pit here and there and holes, casting imperfections. Casting burrs visible on inside of hind legs, under belly and at the end of the tail loop. A small section of the circular ring below the feet missing and a piece attached to the tail broken.

We know of no comparison. Somewhat syncretic and expressive of various influences, he is a problem with respect to his date, the artistic production to which he belongs and his function. Though possibly anywhere between the 11th and 7th century B.C., the chevrons, the manner in which his eyes are expressed and the general feel he exudes encourage us to place him late within this span.

His provenance could be anywhere from the mountains of North Iran to and including the Anatolian plateau. He seems to bear some affinity to Late Hittite (the collar of chevrons around his head), Urartaean, Luristan and certain Animal Styles of the Eurasian steppes. P. Amiet thinks he might be the handle of a tube [1] and mentions as a comparison a Luristan example in the form of a mountain goat [2] . Maybe he was mounted on a pole and served on a funerary canopy in similar fashion to the 3rd millennium silver and gold bulls from Maïkop.

He reminds us somewhat of an aurochs for his shaggy legs, though his claw-like paws would better fit the brown bear of Asia. A rather frighteningly powerful, mystical beast whose purpose may have been to keep evil spirits at bay.

1 For drinking at ritual or secular festivites, see Frankfort, H.: Cylinder Seals. A Documentary Essay on the Arts and Religion of the Ancient Near East (London, 1939), pp. 77-78.