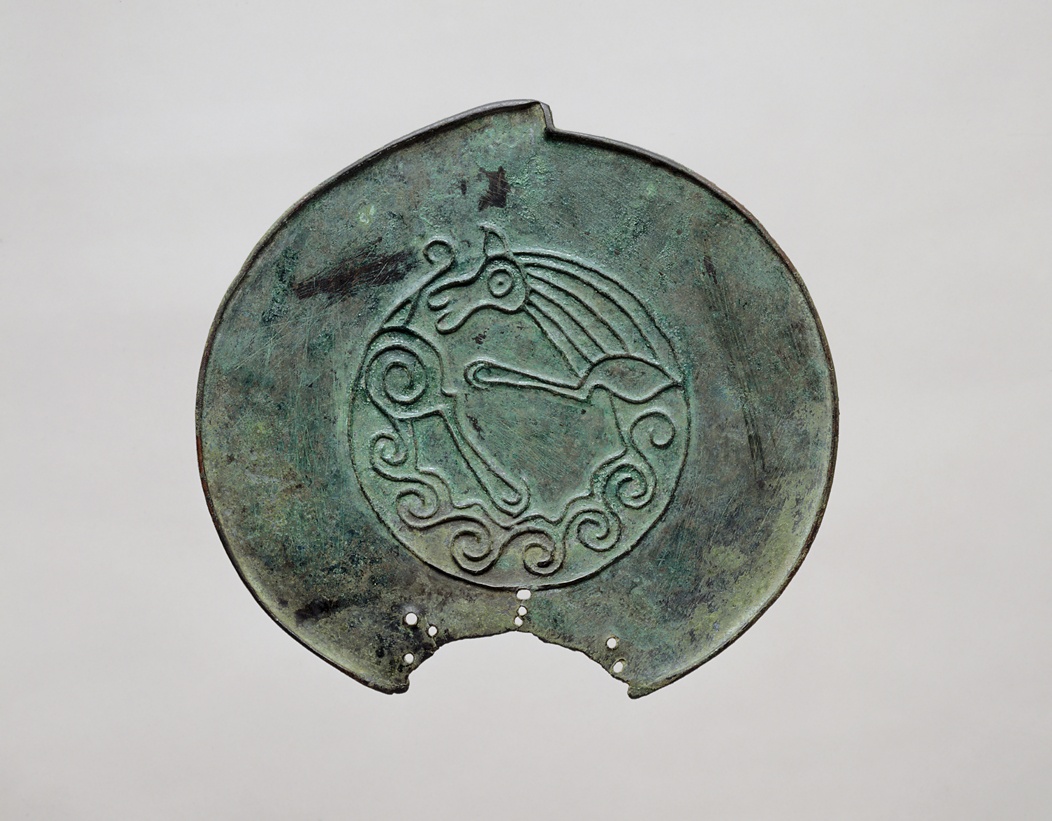 Made by the lost wax method, cold-worked, ground down and highly polished on the mirror face. The handle tang [1] with a section of the disc presently missing, the curved section, as though cut out, with several groups of holes of two different types drilled on its edge, probably indicating two repairs.

Condition: the metal on the decorated side where visible a greenish-greyish black to bronze medal and brownish red with green, luminous in places, with incrustations of greenish to yellowish grey earth. The mirror side - formerly incrusted with a sandy green patina and earth deposits, cleaned to reveal a mottled surface of varying shades of yellowish to reddish brown with gooseberry red spots - still reflects.

Peculiar to this type is the raised edge of the reverse side whose surface is usually decorated in high linear relief with the representation of one or more stylized animals. Sometimes, as on this example, the top edge of the rim is marked by a stepped projection [2].

The missing tang would have been inserted in a handle of wood, horn, bone or ivory; but when broken and missing it would seem that the mirror disc was inset in a new handle by means of a groove fixed with pegs or laced.

On two similar mirrors [3] a stag is represented. Another example is a round mirror in the Hermitage [4] showing a circle of six elks in linear relief with raised ridge but without a stepped projection.

They usually accompanied their owners to their tombs.

The culture [5] that produced such artefacts is to be placed, in keeping with data available at present, in Central Asia and to be dated between the 6th and the 4th centuries B.C.

The oldest mirror of this class, the previously mentioned example with six elks, was found in the Altai and dated in the 7th century B.C. Those with projecting rim show hooved animals which were brought to the Lower Volga but were not native to it.

The origins of this art are to be found in various sources: the nomadic cultures of Central and Eastern Asia with certain of the details found on their horse trappings, stone altars with their particular shape and border similar in outline to the mirrors such as the type found near the Aral Sea in Western Kazakhstan and dated to the 7th to 6th century B.C. [6] and the closest parallels for the decoration are on petroglyphs found in Kazakhstan, Kirghizia and Southern Siberia, dated to the late 6th to 4th century B.C.

A mirror of this type illustrating an elk was found in tomb 87 of the Zuevsky burial ground in the Kama River region, Urals, and dated to the 4th century B.C.[7]

1 One of the comparisons, the mirror found at Selitrennoie in the Astrakhan region, Lower Volga Basin, shows this section intact. It may be that the mirrors of this type all originally had such tangs for insertion in a handle.

2 For comparable examples see a mirror (W: 15.6 cm), though oval in shape, with same rim edge, top projection and small cut out with holes for handle repair. An animal in linear relief on the reverse, in this case a horse (?): Sotheby's, Antiquities and Islamic Art, New York, 23 June 1989, no. 29, ill; also the mirror illustrating an elk and found in the Kama River region (see text).

3 See MatIsslA, No. 30, 1952, pl. XXVI,12; Archeologij SSSR, 1989, pl. 66,18. (Information kindly supplied by the Department of Pre-History and Early History of the State Museum of the Hermitage, St. Petersburg, headed by Dr. Galina Smirnova, in a letter dated 5 April 1990, at the author's request. Originally all the Hermitage specialists on China, Siberia and the Caucasus refused to accept the present mirror and its parallels as belonging to their respective fields. In this letter it was suggested that the closest affinity was probably to be found in the culture of the Sauromatians and to be placed between the Don, the Volga and the Southern Urals, with close ties to the so-called "anagninskaja" culture.)

5 This entry which conforms to the author's original attribution of the present mirror to this part of the world is confirmed by additional data presented by Mrs. E. Korol'kova (Chezina) in her paper "Four bronze mirrors decorated in Animal Style" (pp. 14-16), given during the colloquium organized on 12 April 1993, following the closing of the exhibition, by the Classical Department of the Hermitage Museum, entitled "Hermitage Readings". The George Ortiz Collection.