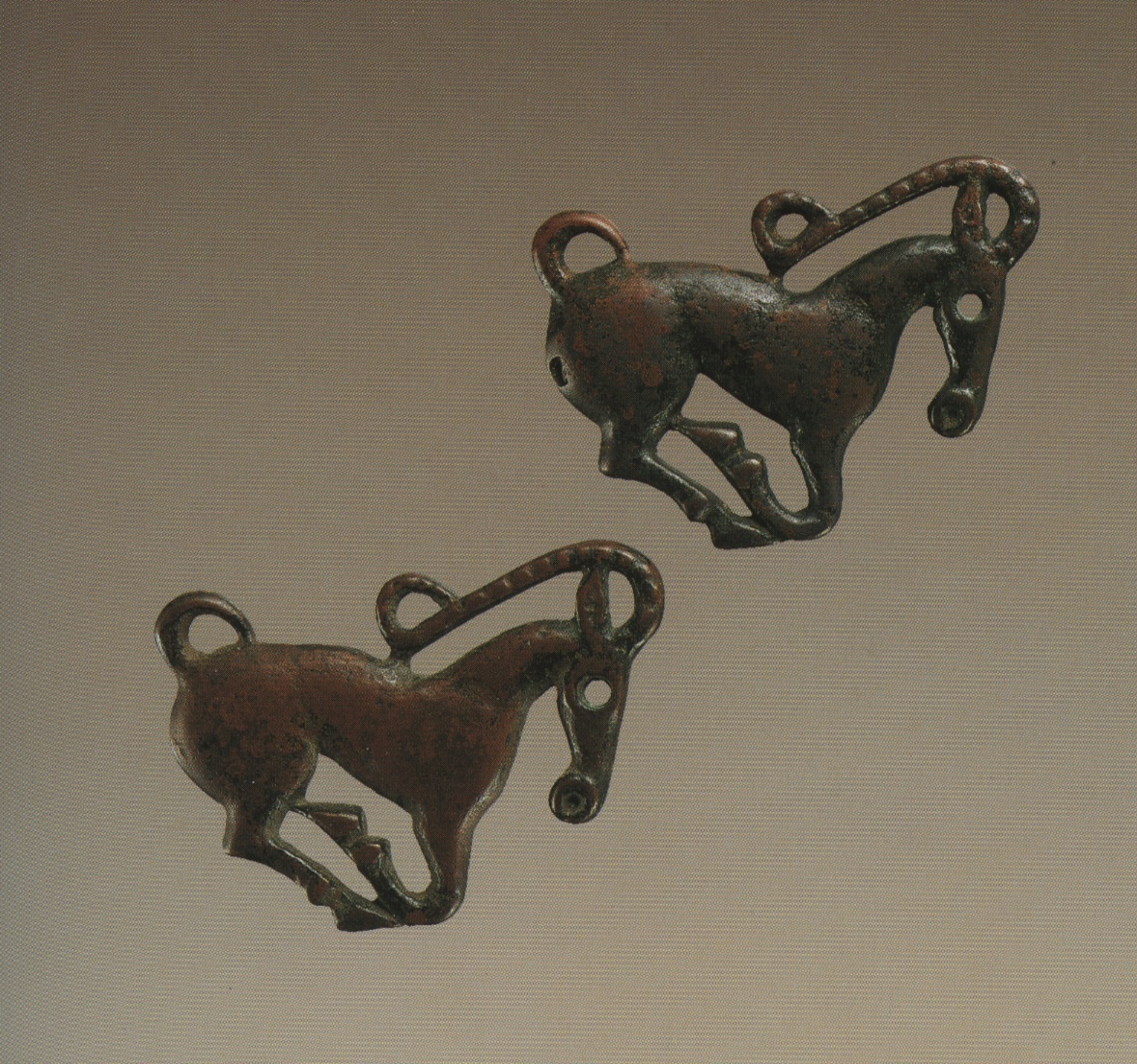 Cast by the lost wax method. An explanation for the fact that the 2 examples are extremely similar, though with slight differences, such as the loop at the end of the horn over the middle of the back and other lesser details, is that probably they were made (as was the boar cat. no. 218) from wax models taken from the same mother mould. From this a wax would have been prepared which was later encased with clay for casting. The eyes hollow. Each plaque has two horizontal loops at the back for attachment: on the reverse of the buttocks and above the hole for the eye.

Condition: a: patina a purplish red metal, dark green in places and with spots of red cuprite. A casting fault on the buttock. b: metal a brownish red with traces of dark green.

Probably affixed as embellishments to leather or cloth, part of human dress, as indicated by their size and attachment loops. In this they are in keeping with Scythian practice where we have numberless finds of gold sheet appliques with repeated motifs. Evidently produced in a certain quantity [2] as attested by the five pieces of same size here mentioned, the fifth being an example formerly in the O. Le Corneur collection and sold in Paris in 1986 [3]. There is a drawing of what seems to be an identical piece [4] in Chenlova pl. 32 no. 27.

An interesting detail, which tends to confirm the carving of a negative for the purpose of making the wax, is a similar casting fault on the buttock of the Le Corneur example.

Their galloping stance evokes the spirit of the steppes and the vision of nomads constantly on the move.

1 From a fitted box with 2 other similar pieces and lesser items that were acquired at a Paris auction in the 1970s (?) by Dr. Elie Borowski. The best example from this lot is the present one.

2 E. Bunker informs us that there is an example from the estate of Arthur M. Sackler, V-3176, which she says is definitely a fake; its length is 5.1 cm and its height 4.4 cm; it weighs 22.68 g and also has a tiny flaw on the haunch and shows absolutely no wear or patina. It is to be noted that the Sackler example would seem to be higher but shorter and is heavier. Its contour edges are rough and its surface seems uneven.

3 Hotel Drouot, 21 March 1986, lot 109 ill.; the measurements appear slightly different because they have been taken as though the natural position of the animal were with its hind leg lying flat on the ground. In fact, all five examples are of the
same size.

4 Information and photostat kindly supplied by E. Bunker, unfortunately it is not an excavated item.